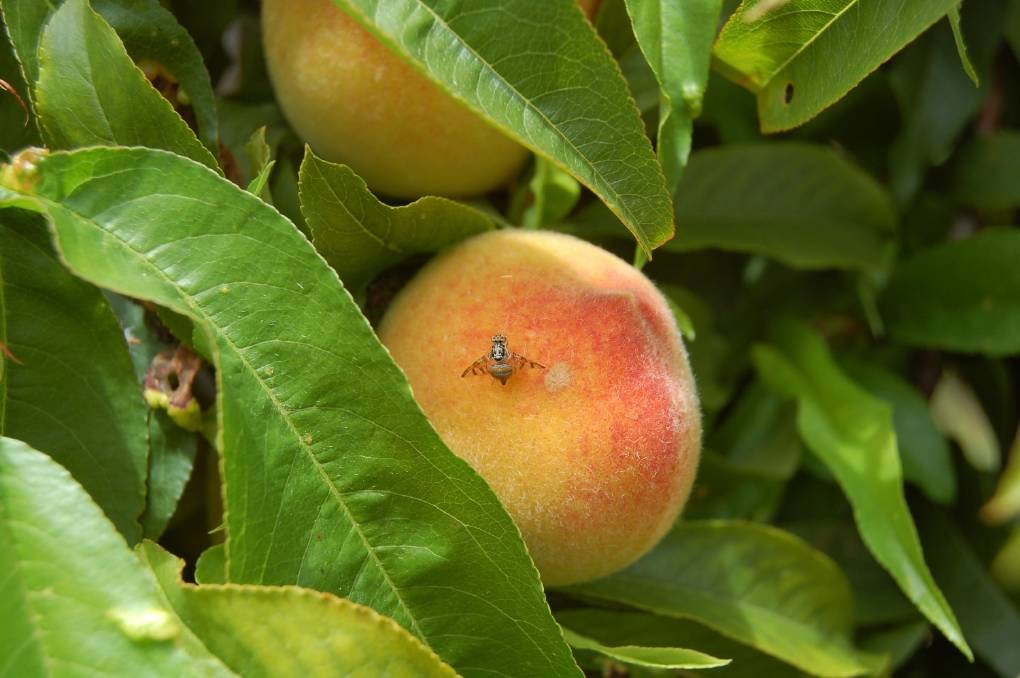 Mediterranean fruit fly poses a large problem to WA orchardists. The WA Dept of Ag and Food is conducting a glasshouse trial of a genetically modified Medfly.

A GENETICALLY modified Mediterranean fruit fly which can't grow to adulthood could be bound for Australian orchards.

A GENETICALLY modified Mediterranean fruit fly which can't grow to adulthood could be bound for Australian orchards.

The Western Australia Department of Agriculture and Food (DAFWA) will conduct an indoor assessment of an imported Medfly which contains a "self-limiting" gene that prevents the female offspring from reaching adulthood so they cannot ‘sting’ fruit crops or reproduce.

The flies were imported as eggs and have been reared in an approved facility at the department, with glasshouse trials set to begin next year.

Developed by the Oxford University spin-out company Oxitec, the flies have a fluorescent marker (DsRed2) to distinguish them from the pests.

This colour marker is used to monitor control of the pest population.

The modified flies have already been trialled in lab conditions and approved for outdoor trials in Brazil.

Department of horticulture director David Windsor said the innovative technique could potentially provide industry with a new means of controlling fruit fly and reducing reliance on chemical use.

“The first sign of damage from fruit is often maggot-infested or ‘stung’ fruit. Stinging is caused by the female fly laying eggs into unripened or ripe fruit," Dr Windsor said.

Dr Windsor said recent restrictions on chemical use meant there was renewed interest in innovative solutions to combat fruit fly.

“It is important to evaluate potential new sustainable control options for growers against this pest,” he said.

“The laboratory trials will determine whether the Oxitec fruit flies can be reared successfully and cost-effectively and if the males are compatible mates with the pest females.”

The new technology is similar to the widely-used sterile insect technique (SIT) that uses radiation to render male flies sterile and releases the flies to disrupt the breeding cycle and suppress pest fruit fly populations.

“The Oxitec technology is based on the SIT approach which we already use in WA, but instead of using radiation to render the male flies sterile, the fly is genetically modified to include a self-limiting gene,” Dr Windsor said.

“When the male flies mate, they pass on this gene to their female offspring so they do not reach maturity or lay eggs in the fruit, dramatically reducing the next generation of Medfly.

“Because these males are not exposed to radiation, it is expected they will be more competitive and active at mating than their male SIT-counterparts.”

Research to develop a method of producing sterile Qfly is being undertaken on three fronts.

"Adelaide University and SARDI are using CRISPR technology to try and develop a line of Qfly with a TSL gene that would make it suitable for SIT," Mr Ryan said.

"Separately CSIRO is developing RNAi technology in the hope of using that technology to obtain sterile male flies.

"In Siebersdorf, Austria conventional breeding with Qfly and Bactrocera dorsalis is being undertaken to develop pupae colour sorting ability in Qfly.

"Those research programs underpin a significant effort by the SITplus consortium to develop SIT for management of QFLY in eastern Australia."

He said while it is important that Government and research facilities facilitate options for management of fruit fly, it also needs grower buy-in to be successful.

"Management of fruit fly is suited to a public/private partnership approach, as we are seeing with the Oxitec development in WA," he said.

But there remains an air of uncertainty about the success of the trial.

Australian Laureate Fellow in the School of Biosciences at the University of Melbourne Professor Ary Hoffmann said the technology being used has been around for a while and has potential but has not been used in any large scale releases.

"In the Medfly, releases have only been undertaken so far in cage environments and it can be difficult to extrapolate results from cage studies to the field situation where the environment is very different," Professor Hoffmann said.

"The technology depends on males carrying the genetic construct having a high fitness (high mating success) compared to males in natural populations, and this can be a challenge to achieve because insects raised in the laboratory for a number of generations inevitably become adapted to the artificial environment where they are reared."

"The approach also depends on expression of the genetic construct in offspring of the released males and this will need to be monitored carefully.

"And of course the new technology will need to compete with the traditional sterile insect technique where irradiated males (rather than ones carrying an engineered genetic construct) are released in large numbers in the environment.

"This represents an approach that has proved successful in field situations in other parts of the world particularly when combined with other approaches.”

Earlier this month, the DAFWA Carnarvon Medfly eradication project acquired a fly release machine in preparation for the release of millions of sterile Medfly into the Carnarvon horticultural area after April 2016.

The flies will be released throughout the two hundred plantations and hobby farms located within the area, as well as the township of Carnarvon.

Professor and chair of fruit fly biology and management at the Queensland University of Technology Professor Tony Clarke also said the Oxitec approach is not without issues.

"The flies are genetically modified, and this greatly limits their use under current legislation," he said.

"Importantly, the lethal gene must be ‘switched off’ in the factory, otherwise the flies could not be reared.

"This requires the addition of tetracycline hydrochloride to the fly diet. Tetracycline is an antibiotic and how the spent, tetracycline-dosed larval diet from a fruit fly factory (which may run to several tonnes per week) will be properly disposed of will need to be addressed. ”

The research is funded by the DAFWA and Horticulture Innovation Australia Limited.