Andrew Taylor eats potatoes. A lot of potatoes. In fact, last year, that's all he ate. And he's better for it. 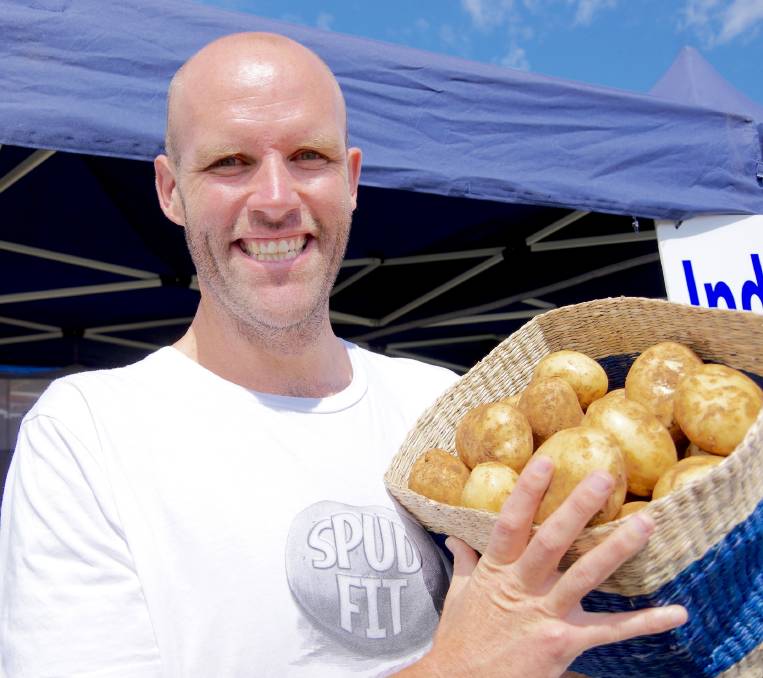 SPUD NUT: Andrew Taylor, Elwood, spent 2016 only eating potato-based meals and lost a considerable amount of weight. He was a guest speaker at the Thorpdale Potato Festival in March.

At the Thorpdale potato festival in March, he spoke about his experience and the drivers to his decision.

Those drivers included using food as a reward and to replace other experiences in his life.

Mr Taylor is a school teacher and past elite athlete.

“I had a realisation I had a food addiction issue. I’d tried other diets over many years, then binging. I was focussed on the number on the scale, rather than what I was eating,” he said.

“I turned to donuts and other similar food for reward and to feel enjoyment in life.

“I wanted to deliberately make my food boring so I could get my emotional, physical and psychological enjoyment from other areas of my life.”

His diet comprised boiled, baked and mashed potatoes – with no condiments added. He favoured Desiree potatoes, but ate other varieties, including Dutch Cream.

“Occasionally I added dried herbs and spices and about once a month I’d try to make something interesting – like potato waffles or potato pancakes.”

Potato waffles are made from boiled potatoes.

“You just squash a boiled potato in a waffle iron and cook it,” he said.

Mr Taylor made pancakes by blending raw potatoes to liquefy, added flour, then cooked in a non-stick pan.

There were health implications.

“My wife insisted I had to get regular medical check-ups,” Mr Taylor said.

So did his fitness. Once a competitive marathon kayaker, his fitness had gone by the wayside.

Mr Taylor now runs 10km regularly, recently returned to kayaking, took up yoga, takes his son to the playground and listens to music.

“Now my life is about food minimisation and enjoying the totality of experiencing life,” he said.

“In February last year, I had a big boost to my energy levels and I started running. Recently I began kayaking again.

“This morning I went for a 10km run, something I couldn’t do 12 months ago. It was raining and I loved the entire experience.

“I don’t turn to a donut for mood improvement.”

He altered his diet this year, with leafy vegetables, fruit, seeds and pulses providing some variety to his ongoing commitment to potato as a mainstay of his daily meals.

“But potatoes still make up three-quarters of the food I eat,” he said.