Matthew Blomfield and Tony Stubley, both from the enviro-agri start-up Gather By inspect an eight month old plantation of 'hyper' Leptospermum growing near Mt Warning in the upper Tweed Valley.

An ambitious project designed to produce the strongest medical Manuka honey is taking shape against the western wall of the Mount warning Caldera.

An ambitious project designed to produce the strongest medical Manuka honey while maintaining bee health is taking shape against the western wall of the Mount Warning Caldera, where one of the first plantations of its kind in Australia is producing promising results.

Matt Blomfield, co-founder and chief executive officer of Gather By and director Tony Stubley are confident that this system of apiculture has legs, using an environmentally regenerative model, community engagement and an evidence-based approach in collaboration with scientists from the University of the Sunshine Coast, University Technology Sydney and University of Western Australia.

In a season that is compromising all sorts of agriculture, irrigated heath plants growing on red soil near Mount Warning have exploded with growth and nectar flow, now head high after eighteen months. 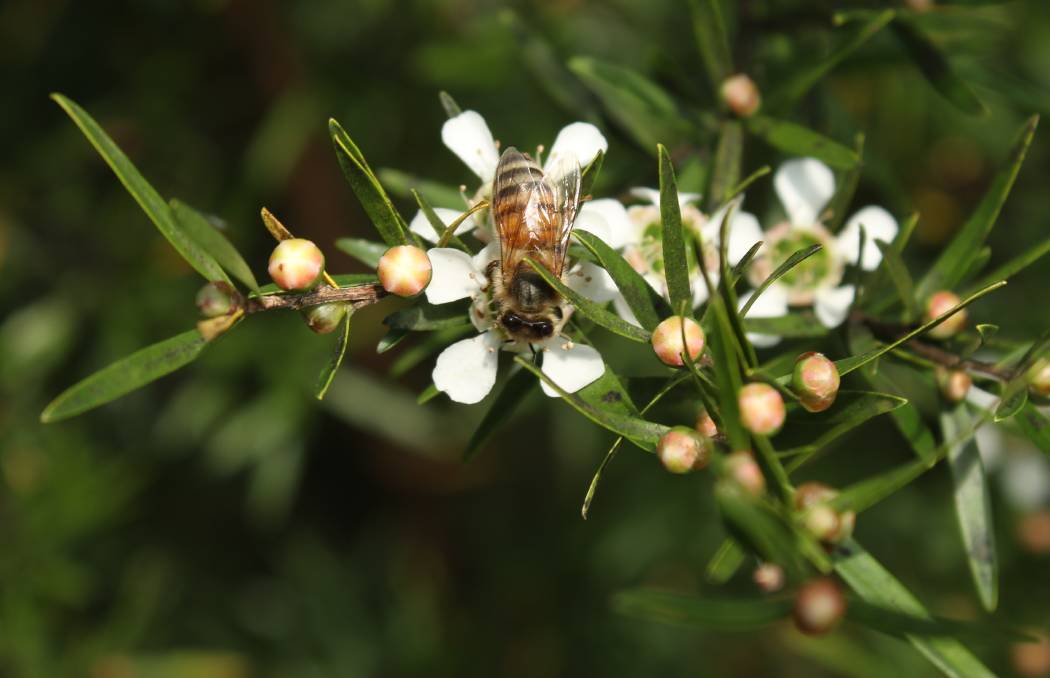 “Our cloned plants produce flowers at an order of magnitude greater than in the wild,” said Mr Blomfield.

Mrs Costin said she is confident of success using the plantation model, although ‘there is still much to learn’.

The parent stock plantation on the Tweed includes diverse species of wild-cloned potent Manuka, all of them Australian native Leptospermum, which have been tested for dihydroxyacetone (DHA) which indicates their ultimate honey strength.

Three years’ worth of research in the field identified 15 species of potent manuka plants, with Mr Blomfield and co-founder Jenna Ford describing the process of driving tens of thousands of kilometres to remote locations, searching out existing Leptospermum stands, geo-tagging thousands of plants, collecting minute amounts of nectar from tiny flowers using a pipette before delivering to researchers for testing.

Based on lab results they revisited the locations of ‘hyper-DHA’ plants, taking cuttings. Now, secure nursery sites are propagating plants.

The company currently has six plantations within five ‘bio-regions’, including a site near Mt Warning, which is their second after an initial planting on the lower Manning.

Others exist near Uralla on the New England, Elands west of Comboyne and Somersby on the Central Coast. Data from these plantations will assess which varieties of Leptospermum best suit each locality.

But bee health is a priority. Extra nutrition for bees is critical because Leptospermum is notoriously low in protein.

Never-the-less threats of pest and disease remain a concern. Resilient Leptospermum is no exception.

Myrtle rust arrived in New Zealand on the back of Cyclone Cook last April and by July there was fungal disease on a Leptospermum scoparium. There is now serious concern among investors in the Manuka plantation concept.

Sharon and Russell Costin have run their Tweed Valley native plant nursery for the past 40 years and recall well the months following the arrival of rust – in 2010 – when the emerging lemon myrtle plantation industry dissolved into panic as susceptible leaves wilted from attack.

These days rust is not such a problem. And, unlike lemon myrtle, native Leptospermums grown in their new plantation have yet to be affected –  even after Cyclone Debbie dumped more than a metre of rain last March.

Scale, and the sooty mould these insects produce when farmed by ants, is the most prevalent problem but that can be fixed with a simple application of white oil.

Bee health is made more resilient by using Gather By’s approach to the plantation  concept and this revolves around keeping bees in-situ, which reduces stress.

To keep them there the plantation design incorporates a great diversity of flowering Leptospermum plants and others with more protein and nutrition which may provide nectar for up to eight months.