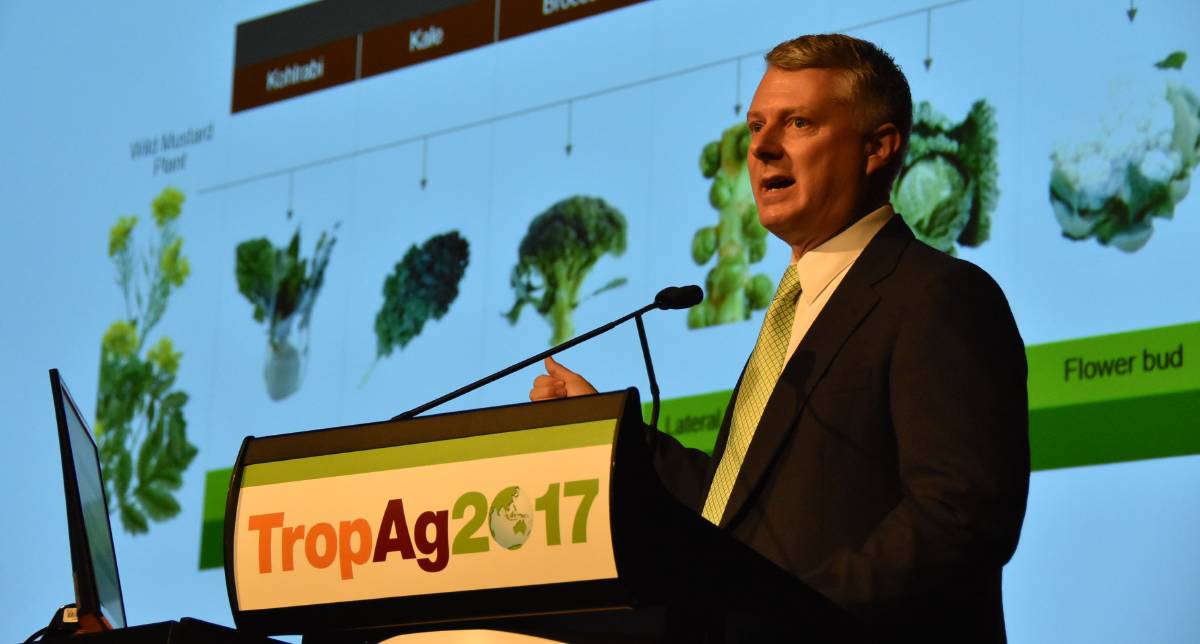 BROADER VIEW: DuPont Pioneer director of regulatory product strategy, scientific affairs and industry relations, Kevin Diehl, says traditionally, plant breeders and breeding companies haven't thought much beyond the farmer as the customer but they need to see the greater public as a customer as well.

Social media has given a strong voice to the public, something those in the plant genome editing space need to consider, says Kevin Diehl.

EASING the public into being more comfortable with genome-edited food will take more than simply stating facts according to Kevin Diehl.

The director of regulatory product strategy, scientific affairs and industry relations for DuPont Pioneer in America provided the keynote address on the second day of TropAg 2017 in Brisbane yesterday.

He described CRISPR-Cas as "very elegant molecular scissors" which allow genome editing that is faster, cheaper and more accurate than previous DNA editing.

Taking a step back from the details of the process, Mr Diehl listed science, regulatory frameworks and social licences as key enablers of innovation.

He said while the science was well covered, the agriculture industry needed to get better at the other two, particularly establishing societal value, trust, and transparency.

"The general public has the right, especially in social media, and the ability to weigh in on these issues," he said.

"We've always thought that data will win the day. How did that work out for GM? Not so well.

Mr Diehl's history in plant breeding has taught him some valuable lessons for future strategies.

He said traditionally seed companies and breeders engaged with farmers as the main customer and not much beyond that.

"It was really about the farmer as customer and here's the technology we are delivering to you," he said.

"We need to think about it beyond agriculture."

Those stakeholders, according to Mr Diehl, include academia, public and private institutions, the seed industry, growers, commodity groups, the grain trade, the value chain and consumers.

He said society needs to see how the technology can benefit them and how it can be available to them.

CRISPR-Cas has gained heightened attention since 2012 when it was discovered it could "create blanks" in DNA enabling plant engineering.

Boiled down, this means finding a very specific place in a DNA strand, breaking it and making changes to it.

He said care and analysis was needed by those working with CRISPR-Cas to essentially ask the question, was the change made the expected one?

Many times breeders are going after a change they could achieve through traditional breeding but the new technique is more efficient.

That doesn't necessarily mean it makes plant engineering any easier.

"The implication that it is easy and anybody can do it is a bit misleading," he said.

Those working in this space require good CRISPR tools and high quality genomics in order to make it worthwhile according to Mr Diehl.

THE possibilities for the technology are very broad.

Mr Diehl said disease resistance is a very universal goal, as are other aspects such as output traits, drought tolerance and maturity.

He provided details of waxy corn, set to be launched in 2019 by DuPont Pioneer.

Waxy corn has a candlewax-like appearance which contains heightened food industrial starch which has high appeal in the processing industry.

He said producing it came from making one change in the make-up of a plant which itself was a 100-year-old inbred product.