Two million sterile fruit flies have been released across Adelaide following an outbreak earlier this year. 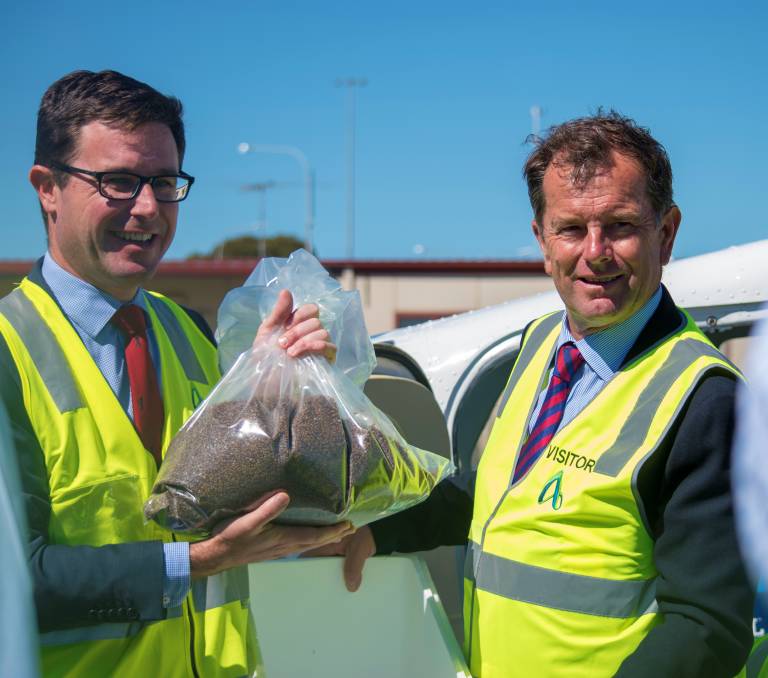 TWO MILLION of the best looking and most irresistible fruit fly have landed in Adelaide’s western suburbs, but the one catch is they are sterile.

To any pesky female Queensland fruit flies that came into Adelaide earlier this year, the newly-bred, sterile, elite male fruit flies will be targeted for mating.

But because of their unique breeding from the National Sterile Insect Technology facility in Port Augusta, they will not be able to lay any larvae, and will eventually die, hopefully decreasing the fruit fly population.

The release formed part of a $45 million program to reduce fruit fly numbers to protect Australia’s horticulture industry, as well as market exports.

The aim is to continue breeding the flies, and eventually only release sterile male flies.

“It is exciting, the science and technology that’s taking place here today is a fantastic endeavour in making the fruit fly less of a problem,” Mr Littleproud said.

“Horticulture brings in $13.1 billion each year to the economy, so it is important we make strategic investments in eradicating this fly, particularly in the southern parts of the state.”

Mr Littleproud said it was likely sterile fruit fly drops could “ramp up” to 50 million flies a week to target outbreaks and reducing numbers.

The air-drop over Woodville follows a successful trial of an aerial release of 140,000 sterile flies in March, was in response to numerous outbreaks in Adelaide earlier this year.

While the project is in its early stages, Mr Whetstone said SA could become the breeding program facility of the nation, and potentially export the sterile fruit flies across the globe.

He described the release not only as a win for SA horticulture industry, but for the sector nationally.

“This new technology will be a game changer not only for horticulture, but also export,” he said.

“What we have seen at Port Augusta and breeding these fruit flies is just a small step in the big picture to make sure SA leads by example.

WHILE other nations battle with Mediterranean fruit fly, Australia has its own contender to take on - Queensland fruit fly.

The dreaded Q-fly has been described as “Australia’s problem”, according to Hort Innovation chief executive John Lloyd.

But despite the fly impacting the nation’s horticultural industry, the National Sterile Insect Technology facility in Port Augusta could aid in reducing fruit flies, when it reaches high production numbers.

“If we are serious about fruit fly control, we have to have a facility that can produce 100 million (sterile) flies a week,” he said.

“The biggest facility in Australia during our time of research was operated by the NSW government and produced about 3m a week - it just didn’t have the scale.

“Other states can use the technology, most of the other states are actually investors in it.

“The biggest investor is the New Zealand government, because they want access to front-line, defensive technology if Queensland fruit fly arrives on their shores.”

Along with SA, Vic and NSW are also investors in the program and will have access to the technology.