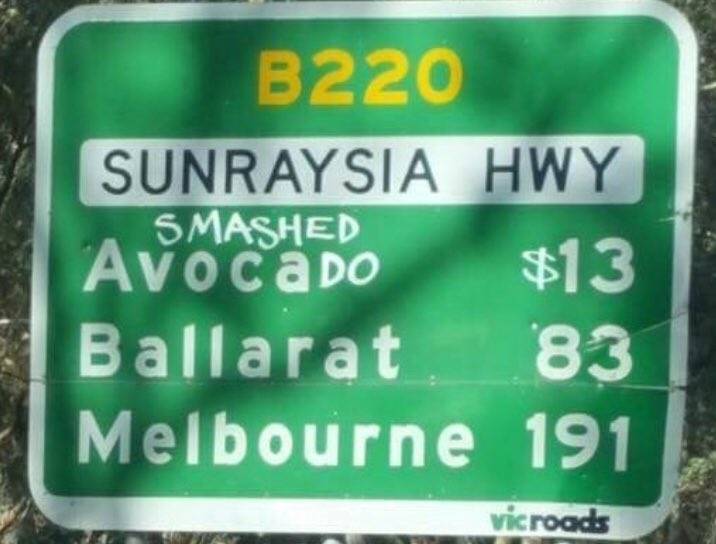 The sign defaced in reference to the popular breakfast. Picture: Bernard Salt/Twitter

A clever bit of graffiti has been spotted on a central Victorian road sign.

SMASHED avocado is both loved and derided as the food of choice of the Millennial generation.

Now a witty vandal has paid tribute to the quintessential breakfast meal in central Victoria, amending a road sign on the Sunraysia Highway 13 kilometres out of Avoca.

A photo of the sign shows that instead of Avoca, it now reads ‘Smashed Avocado, $13’.

Someone has been defacing vicroad’s highway signage precisely 13 km from the township of Avoca in Central Victoria. And, no, it wasn’t me. But I must say I very much admire their handiwork. #smashedavocado#avocado#smashedavopic.twitter.com/klZOLRS0YM

Columnist Bernard Salt – who inflamed intergenerational debate in 2016 with a now-infamous quip about how members of the younger generation were to afford their own houses if they kept buying the cafe menu staple – tweeted the photo on Sunday night.

People were quick to respond with their own observations about the accuracy of the graffiti, pointing out that $13 for smashed avocado was a bit of a steal.

$13 could've easily been $18 with a slice of sourdough