TUCK IN: A potato tangled lunch served at the International Potato Centre in Peru. And yes, that's corn. No, it's not a monster mutant hybrid - that's just the way corn is in Peru.

It's time to get serious about this potato eating business.

AT this point, it is time to address the question that many asked before I left and some may be wondering now: Will I be taking this once-in-a-lifetime, never again, rarest of rare, unlikely the chance will ever return, golden opportunity of going up one of the modern wonders of the world, Machu Picchu?

No. (And the crowd gasps in astonishment.) Time and scheduling does not allow it although I am not overly concerned.

(To be clear, I am not actually going to climb a physical mountain made out of potatoes. That would be silly. I will, though, if such an opportunity can be arranged.)

I manage to scramble up quite a distance of that metaphorical mountain at a lunch during the Open House Exhibit Program at the International Potato Centre (CIP).

The lunch is prepared as a "pachamanca"; a traditional way of cooking over hot stones in the ground.

I am able to sample ocha, a deep-yellow, mushy potato, plus another small finger-sized potato which I can't recall the name of, along with several other varieties.

They vary in sweetness and firmness. Some have almost a smoky flavour to them, but that could be the cooking method's influence.

They all dance over my tastebuds and delight. Orange sweetpotatoes (also referred to as yams) are served and they taste like sweetpotatoes back home.

Adding to the potato tally are some Peruvian variety potato chips (or crisps, as Pom standing near me says).

It's all accompanied by a thick, purple drink made from maize, served warm. It would take some getting used to but I can see how locals would enjoy it.

Speaking of beverages, we are also served a Peruvian "Pisco sour" which I incorrectly refer to as a whisky sour in the attached video.

This writer is a teetotaller by choice but it seemed silly not to sample this beverage.

Truth said, I'm not a fan. It slaps my chest from the inside out. I try not to do the typical gasping cough indicating my lack of experience, like a newcomer in a wild west bar.

I've sampled it (a sip) so now I can move on. I may need a lie down though.

The flavours of lunch are enhanced by the company; a veritable United Nations in casual business attire.

Nations represented include Scotland to my left, Brazil across from me, Peru to my right, America seated at the end, China across and to the left, plus Britain at the other end.

It is an amazing experience. The discussion revolves around, surprisingly, potato breeding but I sense, somewhere below the surface, the pending football (soccer) World Cup tingles on the minds of those seated, waiting for the opportunity to spruik their national team.

Australia will play Peru in its initial pool. I have noted this but remain very quiet. 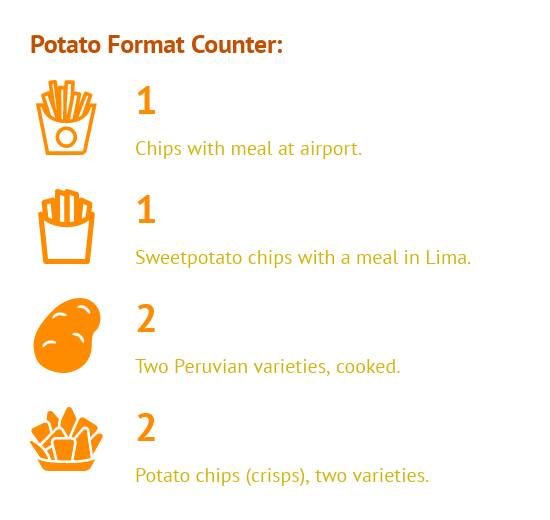