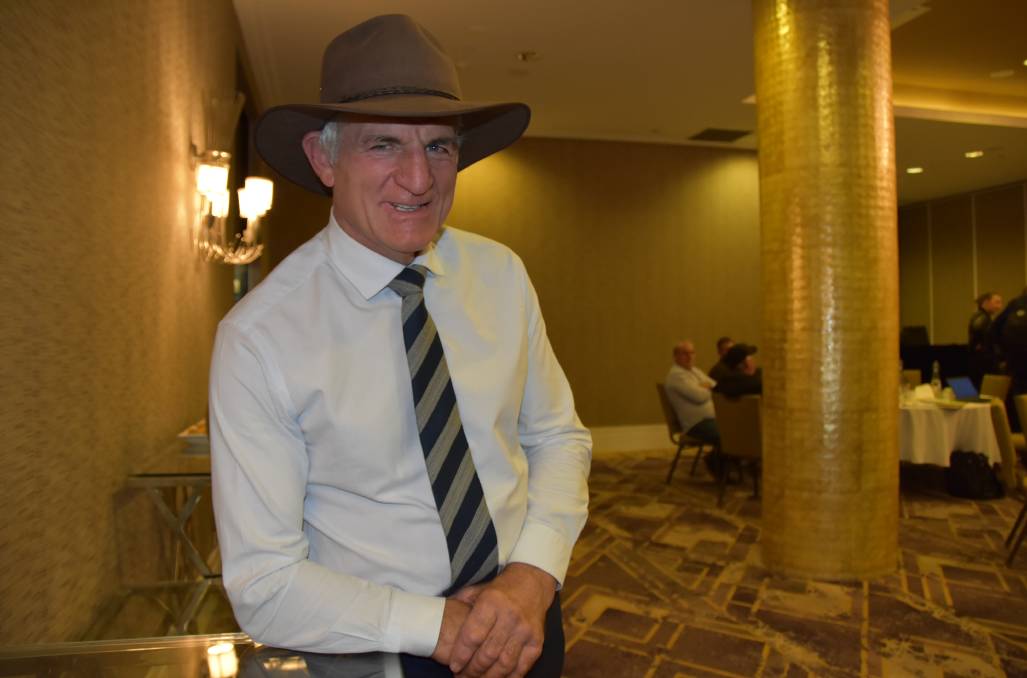 NEW HAT: South African vegetable producer, Louis de Kock, Wildeklawer, sports his new Akubra, given to him as a thank-you gift from Onions Australia for speaking at their Levy Payer Day.

The reason? It saw a need to support the many workers employed in the manual task.

It was just one example of the "bigger picture" thinking adopted by Wildeklawer ("Wild Clover"), and in particular it's creative owner, Louis de Kock.

Mr de Kock was the special guest speaker at the Onions Australia Levy Payer Day in Brisbane yesterday, held prior to the official opening of Hort Connections 2018.

The enthusiastic farmer retold the story of how he left a promising academic career in agricultural engineering and purchased dilapidated farming operations with the goal of reinvigorating them.

That journey began 30 years ago and the farm, on the banks of the Vaal River near Barkly West in the Northern Cape Province, now stands as a picture of what can be done with perseverance and clever ideas.

Key to the success of the farm is the use of more than 70 centre pivot irrigators to grow onions, beetroot, carrots, potatoes, maize and wheat.

Production land of 3750 hectares per year is under irrigation, with 1810ha under vegetables.

Alongside this, considerable amounts of laser levelling was done to shape the land at optimal gradients, to ensure maximum water infiltration with ideal run-off conditions.

This has meant digging channels as deep as 3.5m in some cases to accommodate the fall.

Its pipeline system consists mostly of PVC pipes with stainless steel valves which have been changed from agricultural standard to industrial standard grade. 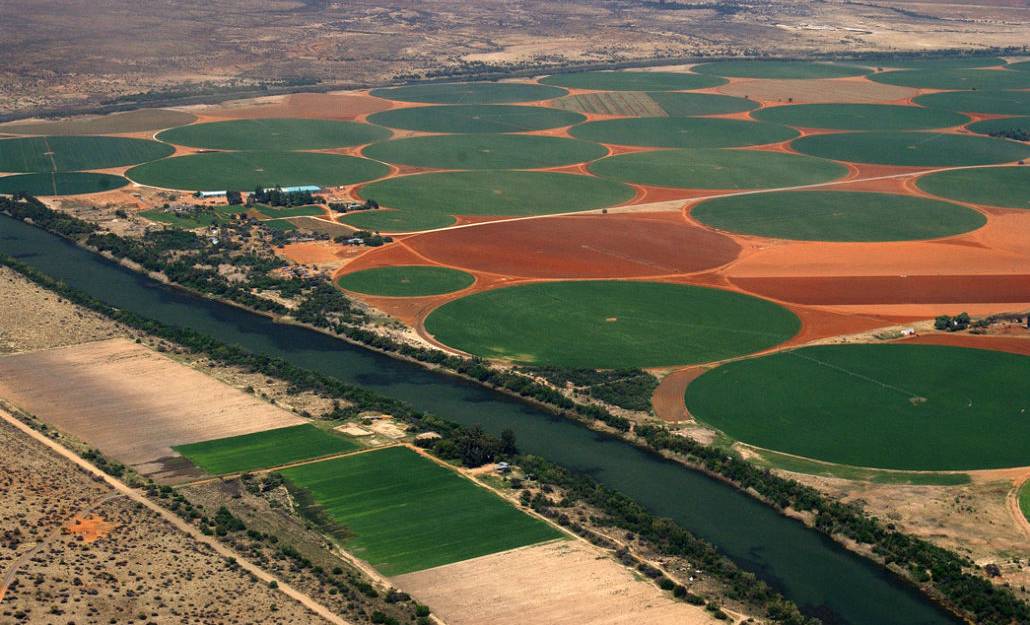 CROP CIRCLES: Centre pivot irrigation has played a critical part in the success of Wildeklawer farm in South Africa.

All pipes run with increasing slope from the river which means no airlocks, the full use of the pipe's diameter and ease of access for repair.

Over time, 17 smaller farms have been organised into three main production units.

The company employs up to 1500 people during peak season.

Wildeklawer sticks to some rigid operation principles which have helped its success.

CROPS are grown in a scheduled rotation system, one after the other, so at any one time a farm manager will know what crop is scheduled for the land.

Crops are also "moved" against the wind so as disease and pests from the current season are not blown into the upcoming one.

The rotation period includes six years for potatoes and onions, and then three years of other crops.

The onion and potato crops are planted in the same beds with the tractor wheel spacings set as standard as well.

Fertilisers are also applied through the centre pivots with 90pc of them now remote controlled by computer from Cape Town on a web-based program.

Mr de Kock said his methods, particularly the transfer of soil types between areas of the farm to improve farm "texture", have helped in reducing chemical use. 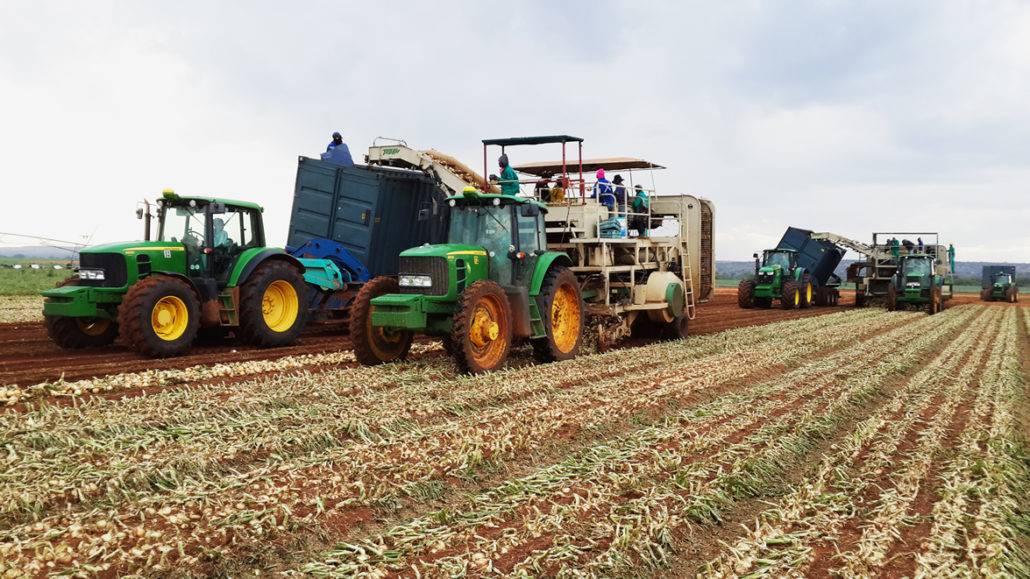 PICK UP: Onions being harvested directly into a shipping container.

"We need to give our customers product with less chemicals," he said.

"You must get your ducks in a row. If everything is in place and in order, then you are in a better position in case something happens in the future."

"Everything we bring back to the financial side. Is it easier? Is it cheaper? Can we cut a cost?"

Backing up all this innovation is the farm's own technical department, including a well-equipped manufacturing shed which produces a large proportion of its tractor implements and pipes.

The machine shop operates as a separate business on its own. Every tractor, truck and forklift is regarded as a profit centre.

The mechanical harvesting is done by an imported machine from the USA. However even this involved 12 upgrades to the original design, allowing it to work in with the receiving trailer which holds a shipping container tilted on an angle.

This means the vegetables have less distance to drop. The container then straightens up as it keeps filling.

The business imported a machine from America but made 12 upgrades as it was designed for hard onion harvesting, not soft onions.

WILDEKLAWER has become a large supporter of communities in surrounding areas, assisting with employment for locals as well as giving back through sporting groups and school sports programs.

"I think sport is a way of integrating people," Mr de Kock said.

Mr de Kock paid tribute to his wife, Cora, for allowing him to pursue his interest.

His visit to Australia was complete with the presentation of an Akubra as a thank-you gift from Onions Australia.

Sponsored by
Banana growers on the Cassowary Coast have reported 100 per cent losses since Monday's deadly storm.
Test
Tropical cyclone Niran has developed into a Category 2 system.
Test
A national survey aimed at improving the lot of home tutors is about to close and is seeking urgent responses.
Test
Concerns have risen after Townsville's BoM weather radar goes offline during Cyclone season.
Test
ABARES says this financial year is the eight-year peak; but prices will ease later in 2021
Test
Economists have joined Katter's Australian Party leader Robbie Katter in questioning the value of Brisbane's 2032 Olympic Games bid, in the wake of it being given 'preferred city' status last week.
Test
OPINION: Is there any stopping the city sprawl, this sign says it all.
Test
Potent rural property values are being inspired by strong cattle prices, and low interest rates.
Test