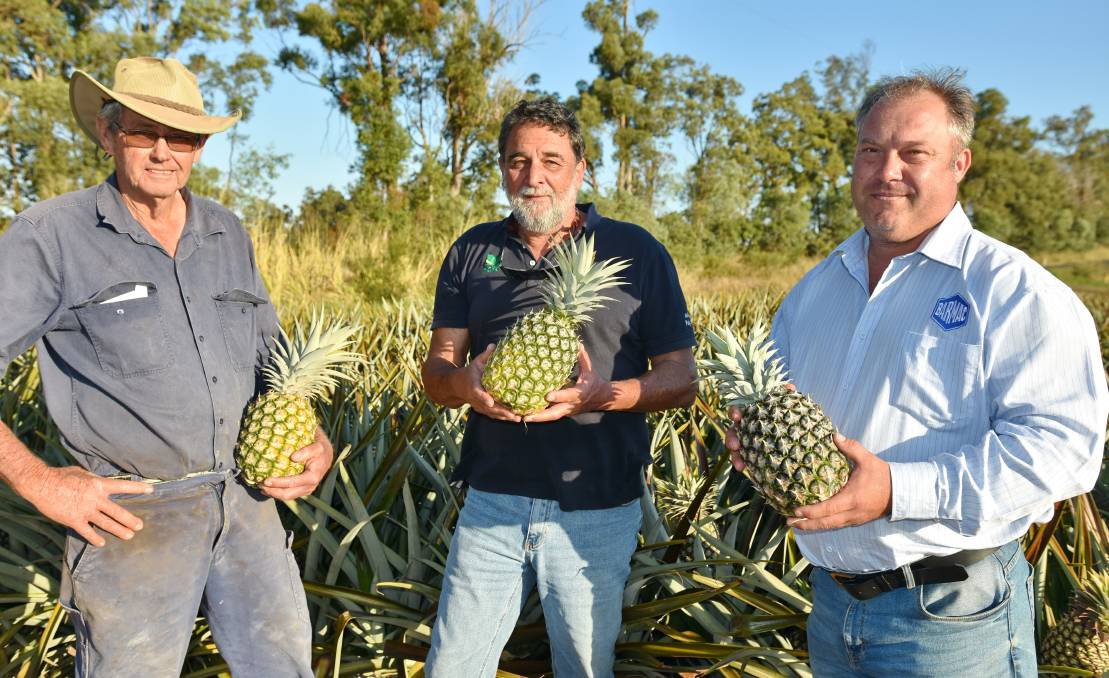 A pineapple grower has welcomed less time spent on the spray boom.

THE opportunity to improve pineapple production despite reducing fertiliser applications and the time spent on his spraying boom has prompted Maryborough grower Phil Smith to trial controlled release nutrition this season.

Phill and his wife, Kay, grow pineapples over about 16 hectares of their 40ha property, with fruit heading to the fresh market or to Golden Circle for processing. They also run some cattle.

They grow 7350 (hybrid) and Clone (smooth leaf) varieties, and achieve two crops from the one planting over a three-and-a-half year period.

One acre blocks are cultivated to a depth of 35 centimetres, scraped for levelling and fumigated with Rural Telone C-35 to combat nematodes and symphylids prior to planting.

Soil testing is undertaken, with any deficiencies corrected; shooting pineapple tops are dipped in a rooting hormone and phos acid mix to protect the roots prior to planting; and the Smiths previously used the Incitec Pivot 77S fertiliser, containing sulphate of potash, as a pre-plant application and again six months later.

Further fertiliser applications, particularly during the good growing season from October to April, could be carried out once a month prior to rainfall events and up until applying ethylene gas about 12 months after planting to induce fruit production.

Fertiliser treatments could then continue up until 16-18 months after planting.

In more recent times, the Smiths have followed the pre-plant fertiliser with two applications spaced six weeks apart and each comprising 50 kilograms/ha of nitrogen, 50kg/ha of potassium and 10kg/ha of magnesium.

Leaf analysis is used to adjust some fertiliser applications and Phill said he irrigates crops about four weeks before picking to give them a boost.

He is coordinating the controlled release nutrition trial on their property with Barmac area sales manager, Wayne Muller, using the company’s Ferticote blend.

The Multicote technology incorporates unique polymer coating that allows a slow, continuous release of dissolved nutrients to the root zone at a soil media temperature of 21 degrees.

As soil warms up, the release rate increases consistent with plants’ growth rate and nutrient consumption. Other factors such as microbial activity and soil moisture do not affect the release rate. Wayne said Ferticote already was being used by some growers in the Yeppoon area, with the aim to fill plants out prior to treatment with the ethylene gas.

There is also a row where no pre-plant or additional fertilisers have been applied, providing a comparison with the other treatments.

The particular Ferticote blend is an eight-month controlled release fertiliser and plants in these plots have also received an application of 25kg/ha of nitrogen, 25kg/ha of potassium and 5kg/ha of magnesium.

Mr Smith said he was also carrying out a liquid application of nitrogen, phosphorus, potassium, iron, zinc and magnesium over the whole trial area.

“The Ferticote has done its job and we will now see how things go,’’ Phill said.

“The Ferticote area has had a lot less fertiliser. We will do a leaf sample and see where we are heading towards harvest in November.’’

Mr Muller said Ferticote also was being used by growers because it offered almost nil nitrogen leaching, helping to prevent any impact through to the Great Barrier Reef.

Haifa Qld regional agronomist, Peter Anderson, said it was significant that a lot less upfront fertiliser was applied in the Ferticote treated area compared with the Smith’s normal pre-plant application.

“There is also a lot less fertiliser being lost. Growers can lose a lot of nitrogen from fertiliser applications,’’ he said.