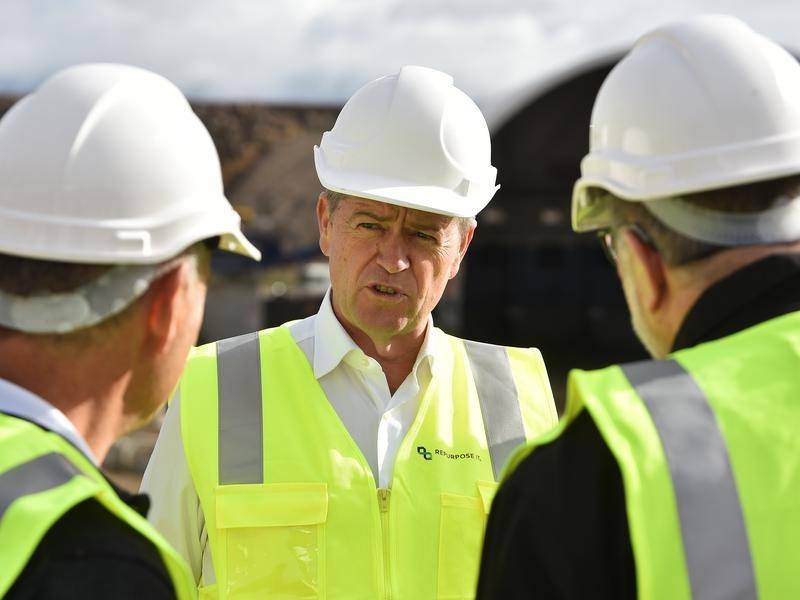 Labor has set a target for half of all new cars sales by 2030 to be electric vehicles.

Australia's 250 biggest polluting businesses would have to cut or offset emissions but could make money by selling carbon credits if they overachieve, if Labor wins the next federal election.

Labor will also set a target for half of all new cars sales by 2030 to be electric vehicles.

Opposition leader Bill Shorten is promising exemptions from the new scheme for major industries like steel and agriculture.

Labor's climate policy is an extension of the coalition's "safeguard mechanism" that limits pollution by big industries.

"There will be no carbon tax, carbon pricing mechanism, or government revenue," Mr Shorten said.

"(Business) don't want to start from scratch with another mechanism. Industry feedback has been unanimous, businesses want Labor to expand the safeguard mechanism, and we've listened."

Some big polluters had their baseline pollution limits set above their worst polluting days, meaning the limit effectively allowed them to increase emissions.

The party would significantly expand the range of ways to do that.

"Particularly, for example, to allow them access again to international carbon markets - which was inexplicably cut off by Tony Abbott - something business has been very vocal about for a number of years," he told ABC's Radio National on Monday.

This would lead to businesses being able to choose the most efficient and cost-effective manner to offset emissions, and would also let them sell their own credits if they cut pollution below the baseline.

Last year, the businesses already covered by the safeguard mechanism surrendered about 450,000 permits, with some having to buy carbon farming offsets at $12-15 a tonne.

The government has dismissed Labor's policy, even though it is based on the coalition's system.

"It clearly is a carbon tax," Finance Minister Mathias Cormann told reporters in Canberra, taking particular aim at the use of international markets.

Mr Butler said that was rubbish.

"We allow business to trade in every other robust international market, why on earth would we not allow them to trade in international carbon markets - provided, of course that they're robust and they're credible," he said.

"What we need is cuts in pollution. Whether they are from the Australian carbon farming sector or overseas robust credible markets or the electricity sector, the important thing is for cuts in pollution to be achieved."

Labor also confirmed it will not use the carbon credits from the earlier Kyoto climate agreement to meet Australia's targets under the Paris agreement.

Mr Shorten called the coalition's plan to use the Kyoto credits "fake action on climate change", saying Ukraine was the only other country to do the same.

The agricultural sector will not be covered by the expanded safeguard mechanism, and Labor is planning with work with the sector to help meet its commitment to be carbon neutral by 2030.

Electricity generators also won't be covered by the mechanism, instead falling under Labor's energy policy.

Labor will also set a national electric vehicle target of 50 per cent of new car sales by 2030, as Australia lags behind other developed nations in adopting the new models.