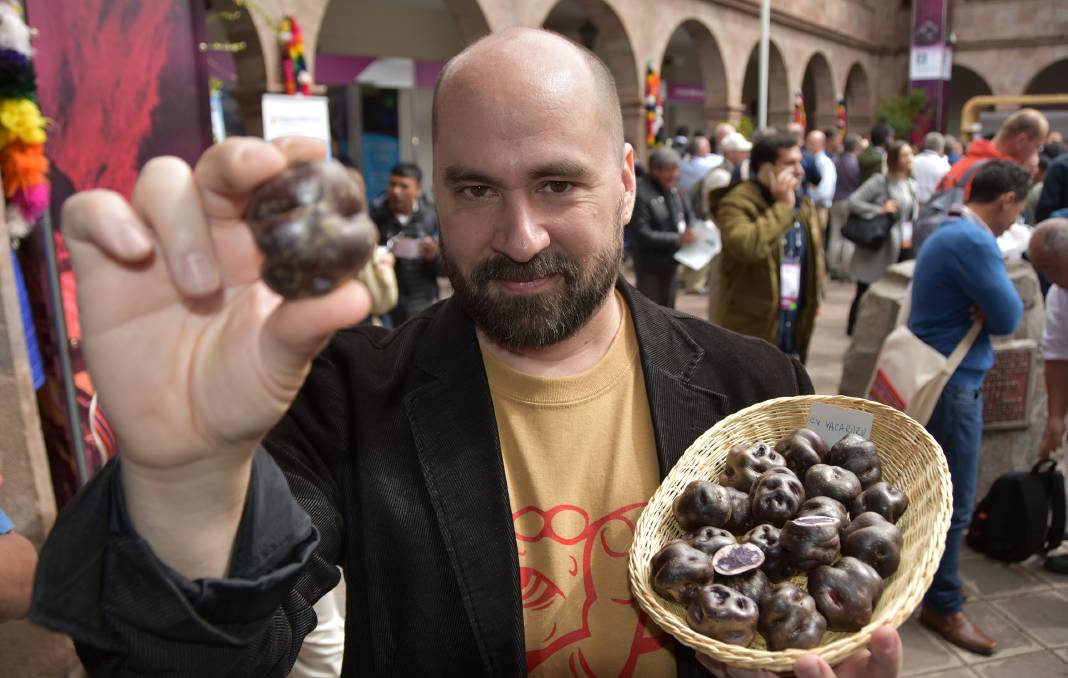 SPUD: The potato artist and founder of "potatoism", Jeffrey Allen Price, New York, US, with his medium, subject and inspiration of choice while at the 10th World Potato Congress in Cusco, Peru in 2018.

A New York artist has become the go-to man for all things potatoes.

Not as much as Jeffrey Allen Price though.

He's known as The Potato Artist.

That entitle encompasses everything that comes to mind; he writes, sculpts and paints about potatoes, collects potato-related material and even performs music with a potato theme.

His interest and fondness of the spud has grown into an obsession and indeed, a career for the American.

When Mr Price began to speak at last year's 10th World Potato Congress in Cusco, Peru, it was clear some within the audience weren't sure how to receive him.

Up until then, no speakers had addressed the beauty of the vegetable or how it inspired an art movement.

But it was the ideal setting for the New York-based artist to put forward his call to engage with those who work with potatoes in order to bridge the gap between science and art.

"By understanding and celebrating the symbolism of the potato as found in art and culture, an important collaboration can be consummated with other established potato disciplines, to engender and promote the potato revolution," he said.

"When you see how it draws people in, educates, entertains and bemuses, it's no surprise that the ubiquitous potato would become the subject of art.

"It is effective in connecting people and potatoes."

IN 2000, Mr Price established the Think Potato Institute (TPI) which he describes as a "conceptual potato-centric organisation" comprising all of his many and varied potato related activities.

They include producing potato events and workshops, delivering lectures, hosting potato dinners, coordinating festivals and art exhibitions, plus maintaining a collection of nearly 6000 potato-related artefacts from around the world. 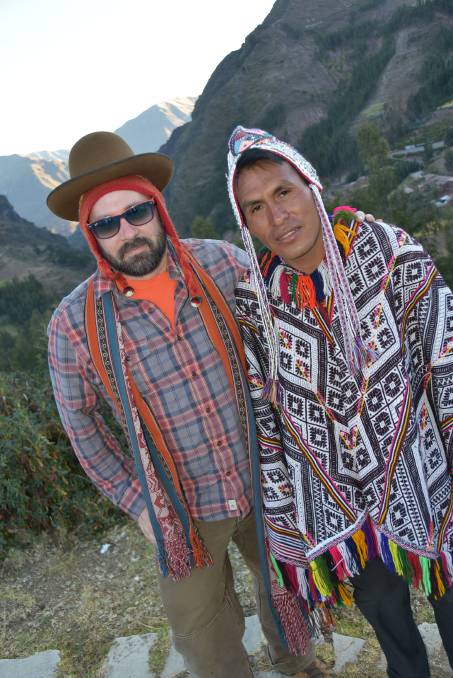 VISITOR: Potato artist, Jeffrey Allen Price, with one of the potato growers within the Potato Park in Peru.

Within that collection are artworks, books, photographs, music, fashion, toys, tools, snacks, as well as health and beauty products.

One of his most prized collections within the collection is his library, totalling some 500 potato-themed books in a variety of languages across different topics and genres.

He is noted with coining the term "potatoism", going so far as to publish a paper called The Dialectical Potato: Potato in Art, Art in Potato.

"This is potatoism," he said.

Potato artist, Jeffrey Allen Price, on the beauty and universality of potatoes @PriceStudio@thinkpotato#PotatoasArt#TuberArt#ThinkPotatopic.twitter.com/o9nJzcV4Dy

"As a contemporary artist, I feel the potato is the perfect antidote to the problem (with) modern art sometimes alienating the un-indoctrinated.

"Potatoism is effective because it's approachable and welcoming and once people are drawn in, they can be engaged by the wide range of ideas, from the serious to the humorous.

"It's the potato art spectrum at work."

One of his more notable art pieces is I Never Get Tired Of Saying Potato, which consists of a large mound of potatoes encasing a television monitor showing his head repeating the word "potato" for an hour, which he ended up having to do twice.

"It had to be re-performed due to the first tape being destroyed," Mr Price said.

He described the artwork as "both serious and funny".

His most recent and ongoing project is the documentary, "This is How I Say Potato" which consists of many people saying, screaming and singing potato, from around the world.

At the time of his lecture, he'd collected about 40 different languages.

EVIDENCE that he'd reached his audience was clear during the World Potato Congress with Mr Price being swamped after his speech by people wanting to purchase one of his shirts; a plain, neutral coloured tee-shirt with the words "Think Potato" on it and a stylised picture of a spud.

Although regarded as the potato's biggest fan or its "number one hype man" as he describes himself, he has found kindred spirits throughout the globe who centre their work around the humble spud.

He said he aims to continue to connect with these like-minded artists to further the potato movement.

APART from drawing, thinking and eating potatoes, Mr Price has even explored performance art and written his own potato music with his band, Potatotron, which performs at events and festivals.

It backs up his 20-year collection of music containing potato references, which includes artists such as Dee Dee Sharp ("Do The Mash Potato"), Neil Young ("T-Bone") and Devo ("I'm A Potato").

"This podcast project has only just begun but I think it will be one of my most endearing projects to date and will be easily archived and accessible worldwide," he said.

On it, he shares his own potatoes stories and ideas, while also speaking with experts and enthusiasts, including Tom and Meredith Hughes, founders of the world's first potato museum.

Mr Price was hunting for further voices while at the World Potato Congress, having taken his all podcast equipment in order make the most of his visit to Peru.