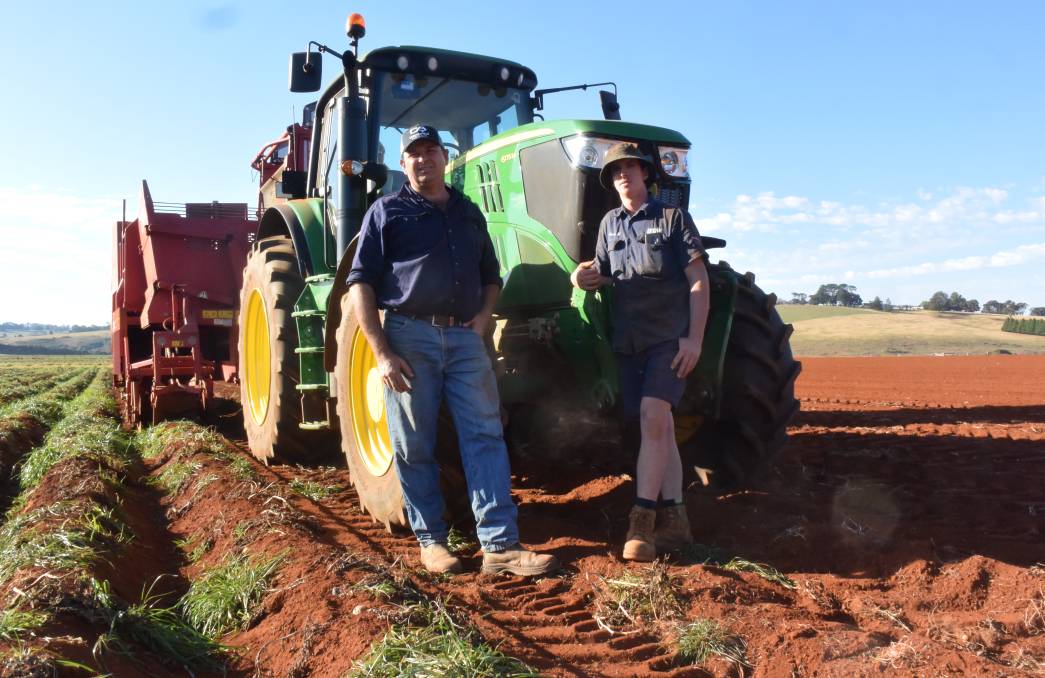 GOOD DIRT: Chris and Brendon Gibbins paid top dollar at Dorrigo for reliable rainfall and productive soil. The farm proved such an attraction, that Brendon knocked back a $60 an hour boilermaker job to grow food.

RURAL land with secure water, consistent production and the opportunity to scale is an investment that continues to increase, never mind the drought.

There are truly extensive acreages changing hands, like the $100 million Norman Farming Holding at Goondiwindi, and the much anticipated sale of Newmarket, Cowl Cowl and Wyadra Stations in the Riverina, all of which can guarantee security of water, production and return.

The value difference between annual cropping country and another with permanent trees is significantly different.

Take the Atherton Tablelands above Cairns, Qld, now the avocado capital of Australia where top money landscapes with secure water, good infrastructure and productive soil sell for upwards of $100,000 a hectare.

Productivity opportunity has attracted big players like the Costa Group which is also investing on the Comboyne Plateau above Port Macquarie, but the best money is paid only to those properties that have access to water.

"You've got to have a legitimate water supply. That is essential," says Port Macquarie agent Kevin Debreceny, who last year sold an unimproved parcel of vacant land intended for avocados to an individual grower for $22,000/ha ($9000/ac).

This is the same price as the best black peat soil near Casino in the Richmond Valley where renewed interest in tea tree oil and the potential Chinese market has doubled expectation in the past three years.

Ray White agent, Rory Birt, says buyers from the western New England are interested in relocating here because of its water security. GROWING: Red soil and water security is driving up the price of land on the Dorigo Plateau where Chris and Brendon Gibbins turn off enormous production in Sebago potatoes.

Interestingly, while lifestyle blocks have historically sold well, there has been a leveling of hobby farm interest since the Royal Commission inquiry into bank lending. However, commercially productive land continues to attract new buyers.

This is an observation seconded by Atherton agent Morgan Brennan who says there has been a push by lenders to roll all rural land buys into commercial loans which favour productive properties.

However, he says the real future in farming will take place north of the NSW border where secure water flowing to the coast past good soil vastly out-scales the Murray Darling Basin.

AT North Dorrigo, consistent rainfall and red basalt paddocks bounded by everlasting spring-fed streams produce two crops of potatoes up to 37 tonnes a hectare. Maize planted after summer harvest mops up excess nutrient and returns the same weight in wet silage. Indeed this is a land of plenty in spite of unusual weather.

The top-priced property in this district reached a record breaking $39,500 a hectare ($16,000/ac), bought by farmer Chris and his wife Christine Gibbins who have been moving closer to water security for years .

They have also diversified their business, from retail fruit and vegetable to trucking and transport and wholesale supply of vertically integrated product.

"Western blokes call us hobby farmers," he admits. "But this is about productivity."

Fresh Sebago potatoes are a staple crop, harvested after southern districts and before the north comes into market. Excellent growing conditions and a history of smart production on this plateau command excellent wholesale money, right now above $1000 a tonne.

The crops's fertiliser program is expensive and means potatoes cost $500-$600/t to produce, gobbling up 1900kg/ha worth of blended NPK with trace elements, followed by a top dressing of nitrogen and potash. A later application of liquid fertiliser gives a boost to potato size.

Chris value-adds three-fold by washing and peeling the spuds, selling them in 10kg bags to registered clubs and aged care homes.

Livestock are also central to their rotation, which includes a period of rest with pasture under kikuyu.

"At the moment we can buy-in for 50c/kg cheaper than the selling price."