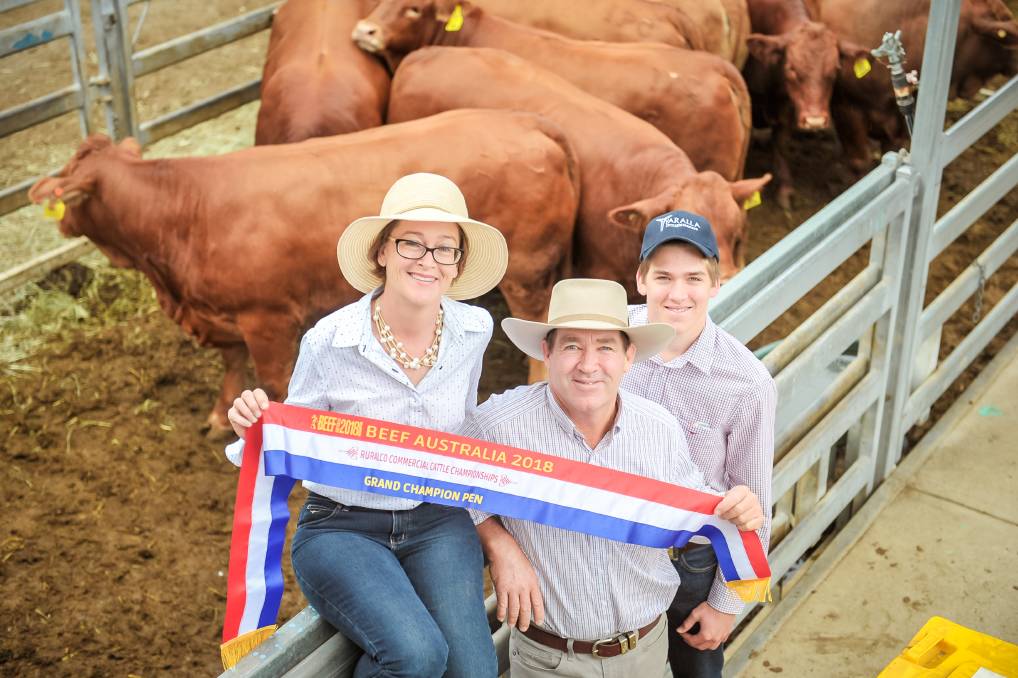 BROADRIBBON WINNERS: Kerry, Ken and Tom McKenzie, took out grand champion at Beef Australia with a pen of Droughtmaster/Simmental-cross heifers.

Having added Brumby, a 1000-hectare property in the Blackwater region, to their business, Ken and Kerry McKenzie were looking for a way to maximise profits from the prime cattle growing and fattening block.

Running about 270 of their 1600-head purebred Yaralla Droughtmaster female herd with Simmental bulls allowed them to do this, as well as better utilise older females, Mr McKenzie said.

He takes the eight-year-old cows from his main herd based at Pearl Creek, via Duaringa, to Brumby to join to Simmental bulls, and said turning those calves straight off mum has "worked really well".

That may be an understatement. Last year, a pen of heifers from this joining won the McKenzies their fifth grand champion commercial cattle gong at Beef Australia.

The heifers, which averaged 561.5 kilograms, were the first females to win the competition, and went up against a record number of 1200 grain-fed and 662 grass-fed cattle.

"I kept the lead of the Simmental-Droughtmaster heifers and backgrounded them for 12 months, then they were fed for 128 days, and they were very good," Mr McKenzie said.

The year before a pen of their brothers were the overall winners in the Mort and Co Paddock to Palate 100-day export feedlot competition.

Simmental softness is a good attribute with the calves. I find them as good as anything you can have, and the fat cover is a bit better than other European breeds. In the past 10 years, the Simmental quality has improved and a lot more people are breeding them. They've definitely become more popular. - Ken McKenzie, Yaralla, Blackwater, Qld

"That is one of the hardest to win, as they are judged on weight gain in the feedlot, on carcase in the meatworks and then on eatability in the restaurant," he said.

Generally all the Simmental-cross calves are sold to a feedlot backgrounder at eight to nine months, the steers averaging 290kg and the heifers just below that. 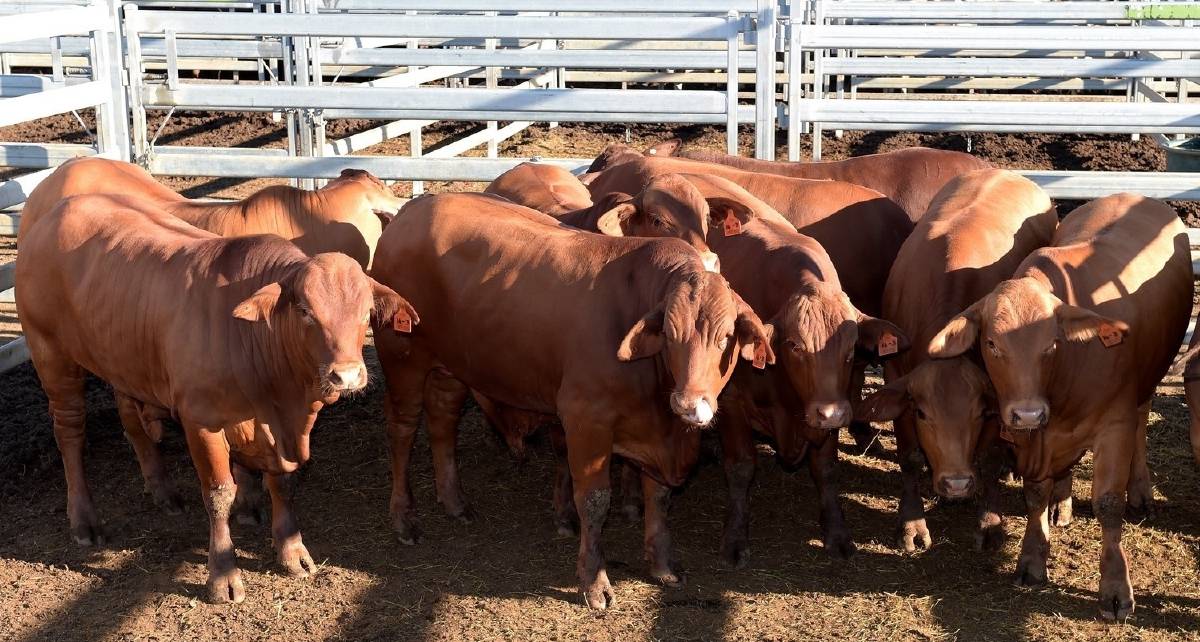 QUALITY CROSS: Joining a portion of their purebred Droughtmaster females to Simmental bulls has boosted vealer profits for the McKenzie family.

Simmental bulls go in for four months, and Mr McKenzie said he found them a very good terminal sire for producing vealers.

"The repeat buyer (of the calves) always says they are excellent carcass cattle and they have a good fat coverage for a European breed. He finds them that bit softer.

"This year we haven't sold any. We are going to background ourselves, just going to try growing them out a bit further. Will see how that goes."

Mr McKenzie said it was a low-maintenance operation, with good genetics and hybrid vigour doing most of the work in producing the prize-winning product.

"I buy the bulls middle of the road, he said. "I don't like them to have excessive size or bone for the vealer production. They have got to have good fleshing and length.

"I select mainly on phenotype, and because they are going over aged cows, calving isn't an issue.

"Simmental softness is a good attribute with the calves. I find them as good as anything you can have, and the fat cover is a bit better than other European breeds.

"I've been buying bulls from Meldon Park and Billa Park for years and just recently bought three off Lucrana at Texas, just to try a bit of different blood."

The realisation of how good the Simmental can be in crossbreeding operations has been spreading, Mr McKenzie said.

"In the past 10 years, the Simmental quality has improved and a lot more people are breeding them," he said. "They've definitely become more popular.

"There are definitely big opportunities in the industry for crossbreeding, especially with the European cattle. They are very good with the Bos Indicus type cattle.

"But it is horses for courses. When you get into those type of cattle the product is very good, and for marketing to feedlot operations they are very good, but you have to maintain the strength of the female herd to be able to produce under all conditions."

Mr McKenzie is considering himself lucky with the season this year, and said although his backgrounding country was fairly dry, they weren't supplementary feeding yet - which was better than a lot of producers across central Queensland.

"The national female numbers are down considerably, but if people can pull through this dry with their core breeders it will be a very exciting time," he said.

The story The Simmental Advantage: Yaralla's success continues first appeared on The Land.