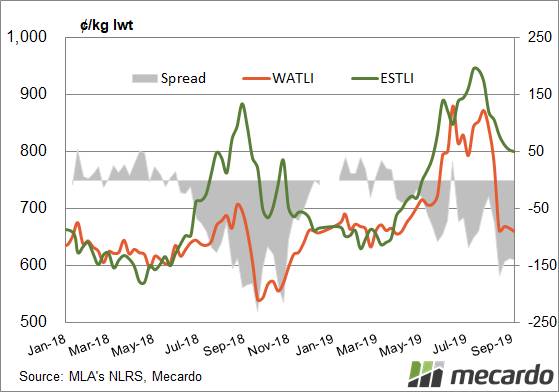 Figure 1: WATLI vs ESTLI. The extension of the moratorium coincided with a sharp drop in WA trade lamb prices during August, particularly when compared to east coast price movements. A similar dramatic widening of the discount occurred during the trade suspension last season.

The live sheep export moratorium during the northern hemisphere summer is nearing an end for the 2019 season writes Mecardo's Matt Dalgeish.

The live sheep export moratorium during the northern hemisphere summer is nearing an end for the 2019 season.

Although, an extension to the period of the ban announced by the Department of Agriculture in August 2019 saw prices react unfavourably in WA markets.

The fortnight that followed the announcement to extend the ban by a further three weeks saw WA trade lamb prices tumble from 840 to 662/kg cwt.

While prices for trade lamb in the east eased over the same period, the magnitude of the fall was far less. The Eastern States Trade Lamb Indicator (ESTLI) dropped just 4.6 per cent compared to a 21.2pc decline in the Western Australian Trade Lamb Indicator (WATLI), to see the spread between the two to widen from a 29 discount to a 167 discount (Figure 1).

Trade lamb markets in WA weren't the only categories to feel the impact of the trade suspension.

During the 2016 and 2017 season (when the live sheep trade was operating throughout the year), price spreads between WA mutton and the ESTLI generally remained within the 100-300 discount region (Figure 2).

In contrast, the last two seasons when the live sheep trade suspension has been in place for the northern hemisphere summer has seen this discount spread deteriorate significantly between June to September. The discount widened as much as 500 in 2019. 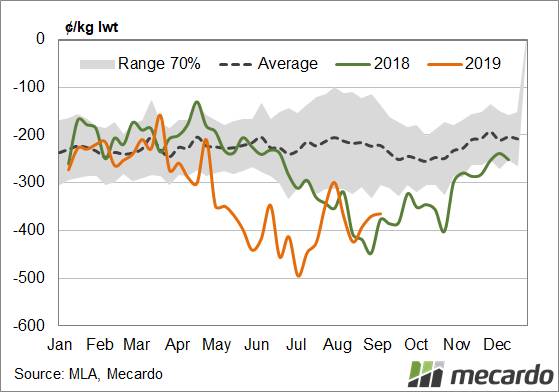 Anecdotal reports from Western Australian producers suggest that the heavy discounting of WA sheep and lamb during the live export trade suspension is the result of the lack of buyer competition.

What does it mean?

In worrying news last week, a spokesperson for Rural Export and Trading WA (RETWA) confirmed that their Kuwaiti live sheep importer had decided to source from South Africa instead of Australia.

This shows that Middle Eastern customers are prepared to source live sheep from alternative countries rather than switch to boxed product.

These alternative source countries don't require the stringent animal welfare standards that are required to be followed along the entire supply chain and insisted upon by Australian participants, as part of the Exporter Supply Chain Assurance System (ESCAS) and the Livestock Global Assurance Program (LGAP).

Bypassing Australia looks to be a lose-lose situation, both for our farmers and animal welfare standards across the live sheep export industry globally.

Sponsored by
A glut in the avocado market is causing pain for Queensland farmers.
Test
'Past practice of putting all the onus on agriculture to both limit our emissions at one end but also capture emissions from other sectors has been recognised as wildly unfair.'
Test
The summit is an opportunity for the fresh produce sector and supply chain to come together.
Test
Workers across the south-west face job loss for not choosing to take a COVID vaccine after the government made it compulsory.
Test
Senator Susan McDonald, guest speaker at Rural Press Club of Queensland, provides update on vegan food labels inquiry
Test
Queensland's premier has released a plan for opening borders by Christmas, but it relies on vaccination rates.
Test
Growcom is guiding the development of the horticultural industry's strategic plan, called Future Fields.
Test
The mobility of seasonal workers will be key to reducing farm costs and therefore farm profitability.
Test