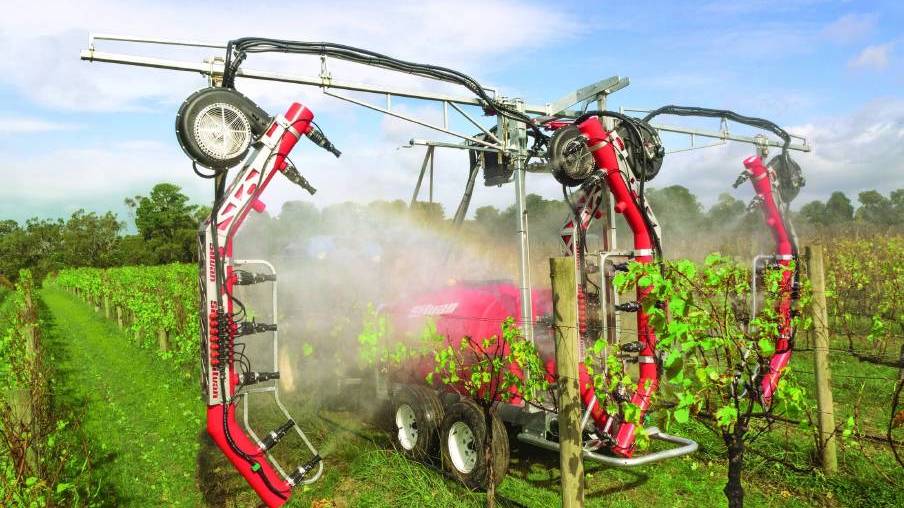 Wine and grape producers are moving their industry forward and remaining competitive through the adoption of new technology, particularly when it comes to crop protection.

Silvan Spraying general manager Gavin Wheatcroft was an exhibitor at the recent WineTech conference and trade exhibition held in Adelaide, showcasing Silvan's Turbo SCRAM sprayer, other models in the Turbomiser range and the Nobili vineyard mulchers.

"At the moment people still tend to spray the whole canopy," he said

Mr Wheatcroft said customers wanted to adjust the rate of chemical they apply while spraying depending on canopy size and density, reducing pesticide use while maintaining efficacy.

"We're working with suppliers on doing that. Most of the technology is available to do it right now. It's just making it user friendly and fit for a vineyard application," he said.

"We want to be able to push a button in the cabin to put more or less chemical on a particular zone.

"At the moment we're controlling it row by row. The next step for us is to control (applications in) different zones within the vine canopy, whether that means not spraying in certain zones or putting more or different chemicals in certain zones."

Mr Wheatcroft said Silvan was in a good position to act as its multi-row sprayers were designed with multiple outlets.

"That allows us to potentially spray at different rates on parts of the canopy with a higher dose in the middle of the head hitting the bud zone for example," he said.

"That's what we focus on: having a sprayer that's quite adaptable to whatever the customer needs.

"Having those multiple spray outlets from top to bottom and left to right allows the customer already to be quite targeted and gives us the opportunity to take it to another level again."

Mr Wheatcroft said because Silvan manufactured its sprayers in Australia, it allowed the company to build-to-order for larger viticulture enterprises.

"We essentially have a broad list of options to make a sprayer fit for purpose for a vineyard," he said.

He said the Turbo SCRAM also reduced the kilowatt power required at low application rates, resulting in a fuel saving.

"With other customers it's given them the flexibility to spray at higher application rates than a Turbomiser they've used in the past," he said.