A banana nutrient trial to find the best use of nitrogen fertiliser has begun its first harvest. 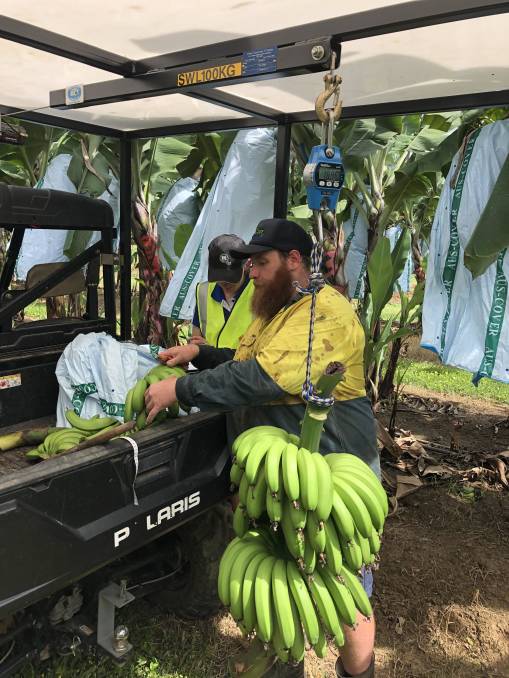 PICKING: DAF Development horticulturist Curtis Lanham with the first bunch of bananas from the trial.

A BANANA nutrient trial to determine the best use of nitrogen fertiliser has begun its first harvest in Far North Queensland.

The three year trial is being run by the Qld Department of Agriculture and Fisheries in partnership with the banana industry and saw its first bananas planted in January at the Centre for Wet Tropics Agriculture research station at South Johnstone, with three commercial operations also being used as trial sites.

The three year trial is looking at current nitrogen fertiliser use in commercial banana production systems and comparing this with new minimum standard application rates.

The trial will assess how these rates effect production, profitability and the environment.

The three commercial trial sites are located at Bartle-Frere, Tully and Innisfail and each have different soil types.

Each season 200 plants will be harvested from each site- 100 grown in accordance with the individual producer's usual practices and 100 using a fixed rate of fertiliser.

DAF Development horticulturist, Curtis Lanham, said that growers were pleased that the trial was taking place on commercial properties as this ensured that the everyday realities that growers face are built in.

"We've done quite a bit of nutrient research but this is about bringing it more in line with the commercial side of production," Mr Lanham said.

"Fertilising bananas is quite complex-some of our farmers apply fertiliser as often as once a week whereas other types of broadacre crops may only need one or two fertiliser applications.

Mr Lanham said about 10 per cent of South Johnstone crop had been harvested, with the Bartle-Frere harvest due to begin soon.

"We expect the harvest to be complete in about 10 weeks, depending on a number of factors," he said.

Meanwhile the first plantings at the Tully and Innisfail sites will be done over the coming months.

After harvest the crop will be assessed on site and again in the packing sheds.

The project team have developed a system called the 'bolt-on fertigation system' to deliver controlled amounts of fertiliser within commercial properties in the trial.

Mr Lanham said the system meant they could fertilise in conjunction with the commercial producers' practices, but adjust the nitrogen rates to suit their needs.

"Most of our growers are already using fertigation but developing this new system was a big step forward in running a trial like this and we hope it will benefit the broader horticulture industry who undertake similar trials in the future,'' he said.

Updates will be provided to the banana industry throughout the duration of the trials.

The trials will also investigate the impacts of fertiliser use strategies on reef water quality, which is important for long-term industry sustainability and the health of the Great Barrier Reef.

The first stage of the trial is expected to be completed in 2022.