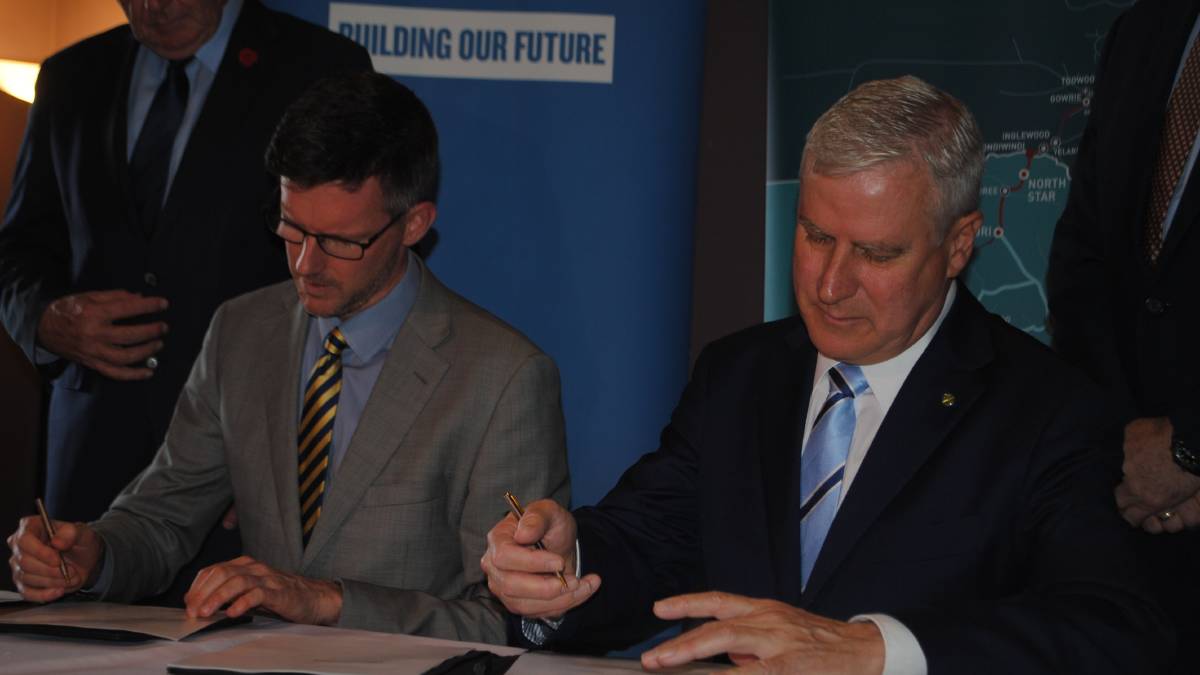 A bilateral agreement between the federal government and the Queensland government to deliver the Inland Rail project has been signed in Toowoomba.

A bilateral agreement between the federal government and the Queensland government to deliver the Inland Rail project has been signed in Tooowoomba this morning.

The 1700km freight route will link Melbourne and Brisbane via regional Victoria, New South Wales and Queensland but has caused controversy on the Darling Downs, where Millmerran farmers fear the impacts that could be caused by putting the rail line across the Condamine Floodplain.

Mr McCormack said the idea of the Inland Rail was first mooted back in the late 1890s, with plans first drawn up in the early 1900s.

"I can see the benefits already that Inland Rail has see for the Parkes to Narromine section, many hundreds of jobs, many hundreds of opportunities for those small businesses involved with procurement into the project and that's on a straight stretch of track," he said.

Mr McCormack said while final details needed to be worked through, he believed construction in Queensland should start in about 2022.

Inland Rail CEO Richard Wankmuller said international experts had been engaged to work through structural solutions regarding putting the line across the Condamine Floodplain.

"We want to make sure everything that comes across those flood plains is safe," he said.

"We're spending a lot of money and a lot of time getting the best in the world, not just in Australia but across the globe, to look at this and check and recheck everything that's been done.

"By the time we're done we'll have no less than three or four independent reviews of the work."

Mr Wankmuller said they were also working on concerns regarding the proximity of the line to Pittsworth.

"There's a train line that goes through there and we're trying to make sure that we don't make the situation worse," he said.

"We've been doing a lot of noise studies, a lot of air quality studies that look at dust, so we're trying to make sure the noise levels are acceptable."

Mr Wankmuller said they were tweaking the route to minimise impacts on landholders but "in the order of hundreds of metres rather than hundreds of kilometres".

The possibility of a passenger line from Brisbane to Toowoomba will also be investigated as part of the project.

Groom MP John McVeigh said he had been meeting individually with concerned landholders who will be impacted by the project.

"I will continue to do that because no individual landholder should bear the cost of a project that brings benefits to all Australians," he said.