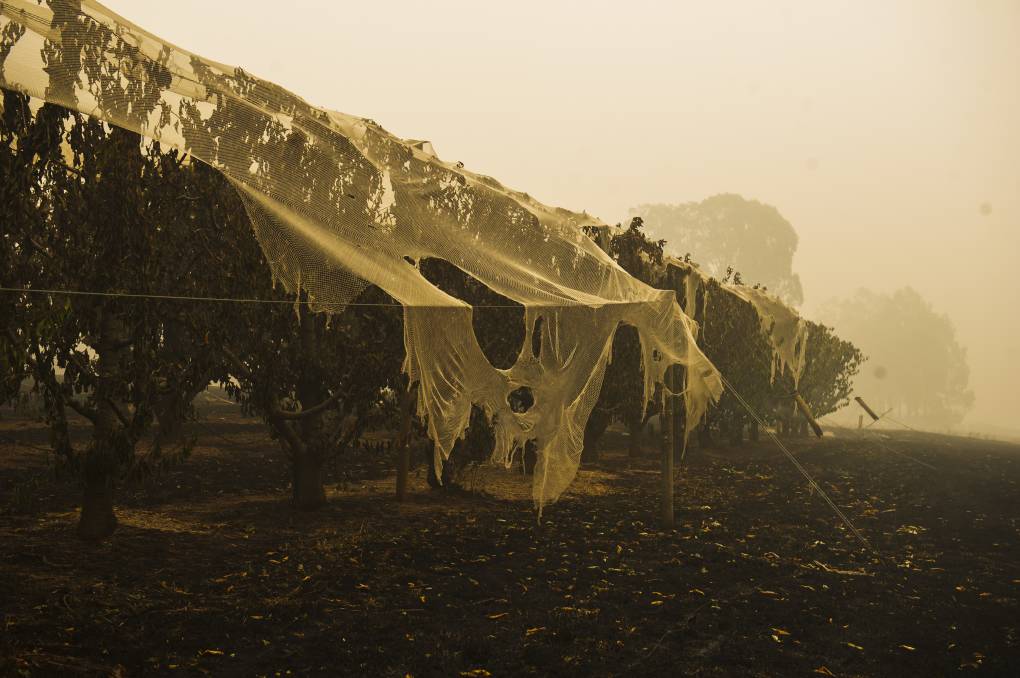 FROM the South Coast to Batlow and well beyond, the bushfires burning across south-eastern Australia have dealt a punishing blow to many of the region's primary producers.

"We haven't really made money out of growing apples for the last five years," Batlow orchardist Ralph Wilson said.

His daughters ask why he would work 12 or 14 hours a day, seven days a week, just to make enough to survive.

The answer is simple.

"To plant trees, to nurture them, train them, water them, fertilise them, grow them up and then pick fruit off them, it's a very rewarding profession."

Orcharding might be a rewarding profession, but it's also a tough one and there is no better example of that than the damage the Dunns Road bushfire left in and around Batlow, a town famous for apples.

Based on Mr Wilson's initial assessment of the aftermath at his property, Wilgro Orchards, he has suffered significant losses.

Firefighters have saved his house and roadside shop, but an estimated 10 to 15 per cent of trees - which could not be insured - have been lost.

A lengthy list of casualties at the orchard also includes the apple bin shed and contents worth about $60,000, irrigation equipment, last year's cider that was waiting to be bottled and a water tank.

Hail netting worth up to $50,000 and unable to be insured has also been destroyed.

Still, Mr Wilson has no plans to call it a day, and he and wife Judy intend to press on with a scaled-down operation.

Already, he's sorting out insurance claims and trying to re-equip his property before a harvest next month.

"It's going to take a long time [to recover from the fire]," he said.

"I'm nearly 70 and we really can't go and re-plant orchard at our age.

"The time lag is about seven to 10 years from when you plant to when you start to make money out of it, and the industry is not very lucrative anyway.

"But our future is still very much in Batlow, there's no doubt about that, albeit probably with a bit less orchard." While Mr Wilson came to orcharding as an adult, it has been in fellow Batlow man Greg Mouat's blood since birth.

The third-generation orchardist's property Mouats Farm, where he was born and raised, has been in the family since 1926.

That's why he was especially relieved to find the house still standing, along with his roadside stall.

Mr Mouat evacuated to Tumut ahead of the fire's arrival in Batlow and said it had been difficult to wait for news from afar.

"I fully expected not to have a house," he said. "The firefighters have done a huge job and we're forever grateful.

"You build up what is this emotional tie to the land, because it's been in the family and it becomes part of you.

"It's not like just buying a house in suburbia and having it for 20 years and then moving out and buying a more expensive one. This is your family. It's part and parcel of who you are.

"We've lost a shed and we've lost some trees, so we've had a little kick up the tail, but we're not down and out by any stretch of the imagination."

Mr Mouat said his early estimate was that the fire had claimed up to 15 per cent of his roughly 14,000 trees.

But he said he was in a positive frame of mind about bouncing back and urged tourists to come to Batlow and the surrounding area, and "make a weekend of it, drop some money in town", once things settled down.

"What we need is feet in the door," Mr Mouat said.

"If people are coming and buying our products directly from us, we do better off that than going through the system and sending it off to a supermarket."

Mr Mouat said he hoped Batlow and its importance in food production would make the town a priority for financial assistance from governments.

"It's not just the orchardists affected, it's the entire knock-on effect," he said.

"It's transport of the product out of the area. It's cool-storing and the packing, the administration, the distributors in the marketplace, the consumers ... everybody's affected by a lack of production one way or another, including the general public because if there's a lack of production there'll be higher prices.

"We've heard of the $2 billion over two years [as part of the new national bushfire recovery agency].

"It would be nice to think that will trickle through and that food production gets some priority."

The town's other big industry, forestry, has also been hit hard by the fire.

While Batlow is still very much in the early stages of recovery, Batlow Fruit Company general manager, Pernell Hartley, said the fruit industry had little time to waste.

He said the immediate priority for the growers' co-operative was securing crops that had not been burnt and sorting out orchard infrastructure like sheds, irrigation equipment and netting, with birds already starting to damage fruit.

"[The fire] is a major blow for the industry," Mr Hartley said.

"We don't quite know until we can do full assessments, but it could be anywhere from 10 to 20 per cent of total production that could be lost.

"It's quite imperative that we get on top of these issues because if we can't get on top of the problems created by the fire, it could be much worse than what the fire has already done in terms of damage.

"It will have a major impact to the local economy if we're not in a position to be able to supply fruit."

WINE lovers have been urged to head to a winery to buy a bottle as tourist income slumps.

"The best thing people can do is buy a bottle of Canberra region wine if they want to support the industry," said Angus Barnes of the wine industry association for New South Wales and the ACT. The output of the region's wineries was expected to be down substantially, cutting profits. Winemakers also fear smoke will taint their product, making it unsalable.

Visitor numbers are already being hit, and for small and medium wineries, that can be 40 per cent of income.

"The biggest impact that we are having is through tourism," the industry spokesman said.

"Our consumers have, possibly rightly, decided not to come to visit us in this time of fire and smoke.

"That has had a significant impact for small and medium winemakers who rely on the cellar door."

Mr Barnes was speaking after a crisis meeting at the Mount Majura Winery in Canberra of about 50 winery owners from across NSW and the ACT.

At the meeting, experts from the Australian Wine Research Industry advised on the impact of the smoke. They told the winemakers what the risks were as the summer progressed and what they could do to protect the vines and the product. 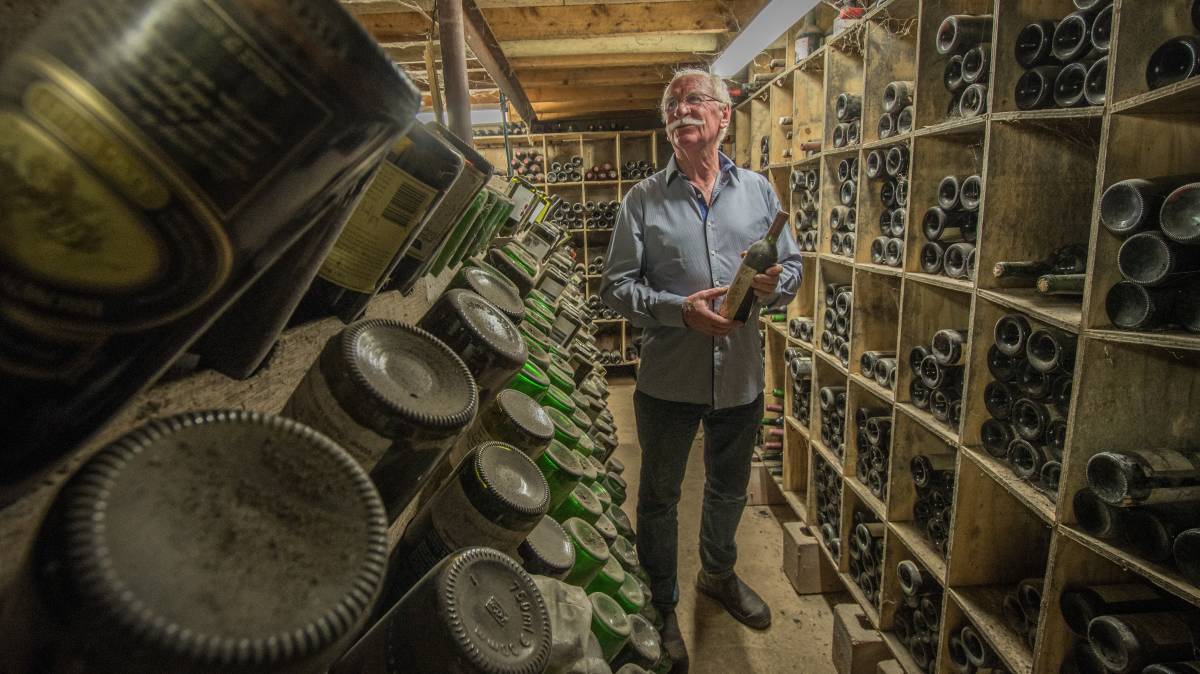 The crucial period for smoke damage will be from February onwards as the grapes become sweeter.

Smoke can taint a wine, according to Mount Majura winemaker Frank van de Loo. Drinkers might not know exactly what the problem was, he said, "but they would know that something had changed and see it for a negative".

Mr van de Loo said winemakers in the Canberra region would co-operate to get grapes and batches tested to ascertain whether smoke had tainted the product.

"This has or will tax the water resources of many vineyards and many growers are constantly watching forecasts for meaningful rain, with concerns mounting for the quality of the harvest.

"Record high December temperatures and the smoke have added to the grape-growers' worries."

The story How the bushfires affected our food producers first appeared on The Land.