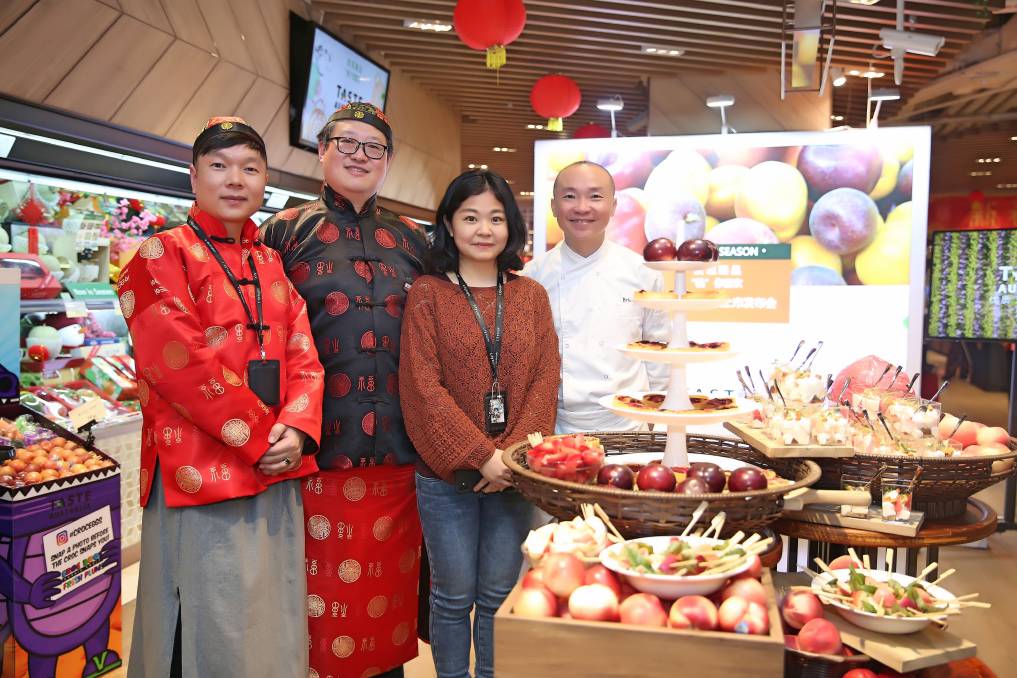 ON SHOW: Part of the Australian stonefruit promotional team at retail chain, City Super, in China, showing off fruit and giving away samples.

THE Australian stonefruit industry is painting a positive portrait of its fortunes both here and overseas this summer.

Drought conditions have led to more smaller size fruit than previous years but according to Summerfruit Australia chair and stonefruit grower Andrew Finlay, the crop will be sweeter than ever.

"All major growing regions are in the middle of a severe drought. Water is extremely hard to come by and is very expensive," he said.

"While this does mean that there is more smaller fruit than usual early in the season, it's made for amazing eating as the sugars are more intense.

"Growers have worked really hard despite the ongoing impacts of the weather and the best way Aussies can support the industry is to head in store and enjoy the beautiful stonefruit that's on shelves.

"Don't worry about the size."

The industry predicted a crop of more than 100,000 tonnes which will be similar to last year.

Beyond the homefront, Aussie stonefruit was in high demand in the lead up to Chinese New Year on January 25. Spurred by a targeted campaign being delivered with growers through the Hort InnovationTaste Australia initiative, product launches saw consumers lining up to get a taste of Australian produce.

In Thailand, a Bangkok Tesco store showcased the produce with a wall of stone fruit and red lanterns to mark the lead up to Chinese New Year.

"Australian produce is good quality with a good taste," she said.

"We do sampling to let our customers try it, and they love it. These promotions have proven really successful."

READY: One of the dishes served up to entice South East Asian customers to purchase Australian stonefruit.

"The Chinese New Year event we held for Australian stonefruit has received a massive welcome from our elite shoppers and members," he said.

"Premium Australian fruits are very popular in China, so we are thrilled to be a long-term retail partner with Taste Australia."

The Aussie stonefruit campaign will continue in Chinese retail outlets until March with regular sampling in supermarkets across Beijing and Shanghai, livestreaming, promotions and We-Chat.

At the same time, Australian growers and exporters - Montague, T&G Global, LPG Cutri Fruit Global and Nutrafruit for the Queen Garnet plum variety - will participate in industry co-promotions in various areas of China including tailored events at wholesale markets.

Senior manager perishable and dairy division Irene Khor Kim Ean said their campaign, which runs till March, is all about a Celebration of Flavours ushering in a prosperous Chinese New Year.

"Australia has a good reputation for supplying quality premium products and our customers love them," she said.

"A large portion of our produce originates from Australia and we are committed to selling more Australian produce in future." TAILORED: The fruit was used in a variety of ways and specially catered to Asian tastes.

"The growth of stone fruit exports to South East Asia has been phenomenal," she said.

"The success of the Taste Australia initiative can be attributed to the dedication and support from Australian growers, and exporters, retailers and delivery partners in each key market, and Austrade who act as official representatives in-country, providing valuable support.

"Hort Innovation looks forward to continuing to work with our stakeholders to strengthen our relationships and reputation across our key trading markets, and build new links for the benefit of growers."

There are more than 1200 stonefruit growers from 26 regions nation-wide.