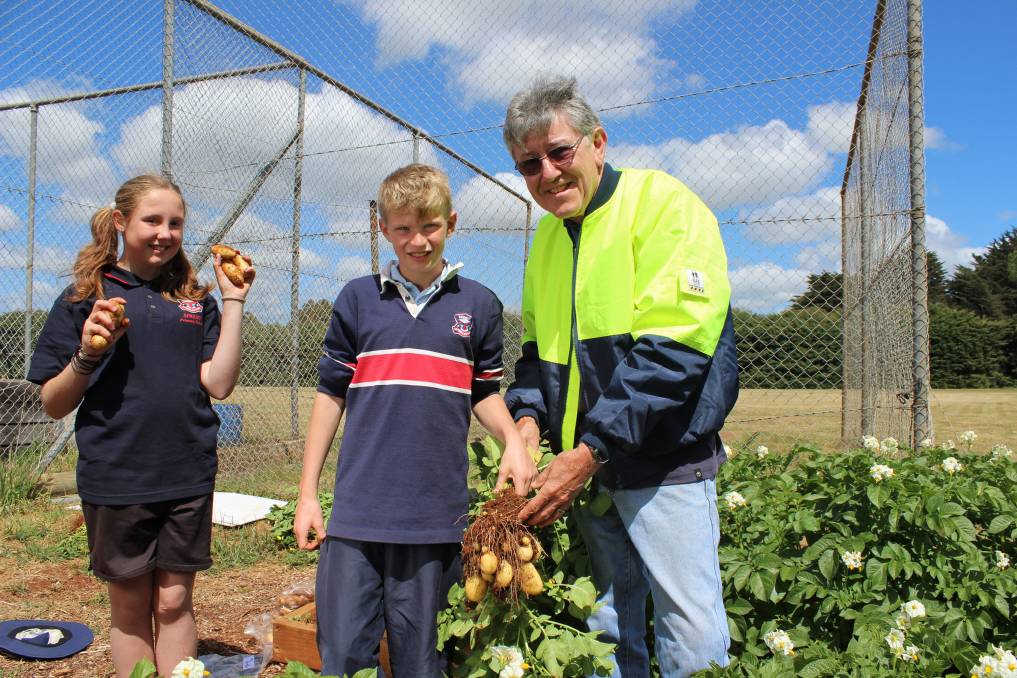 IT doesn'T seem that all those years have passed since I had a very pleasant lunch with Tony Biggs, who was mulling over how to get this magazine going.

But they obviously have.

He was the first editor.

It was a few years before I began a long and constructive relationship with a new editor, a bloke called Ashley Walmsley.

I can't overemphasise how pleasant and constructive this has been. In preparing for the anniversary edition, Ash asked if I:

"Wanted to do a reflective piece on your time writing for the magazine, maybe some of the issues covered, or your thoughts on Australian horticulture in general."

I've started on the former, as you can see.

Now the dust has settled, I want to reflect on two totally different issues I've covered, namely seaweed in agriculture and climate change.

SEAWEED in agriculture has interested me since I was a kid.

My father used Maxicrop, the first liquid seaweed product when it was launched in 1949. 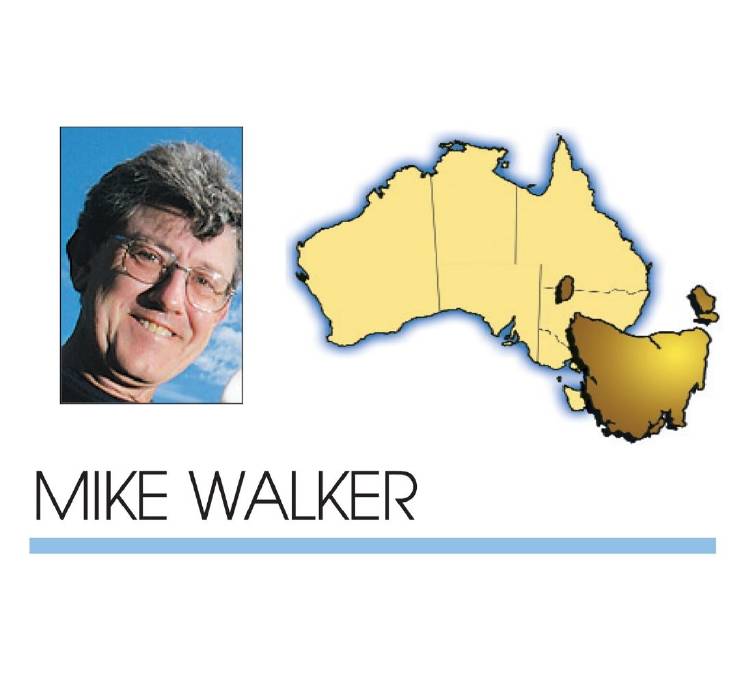 Seaweed had, for centuries, been collected from the beach and used on farms close by, so it was popular in the Channel Islands.

When we settled in Tasmania in 1979, we were told to buy a seaweed scavenging permit from the local police station for $2 before we did this, which we did.

Ours was numbered "00002" so obviously no one took this seriously.

I raised the topic of Maxicrop in 1964 with my PhD supervisor at the National Vegetable Research Station in England, who snorted and said "bloody expensive sea water".

But then, his department was reliant on large capital injections from agricultural chemical companies.

When this magazine began in 1990, there were very clear distinctions between those chemicals and "organics".

Thankfully, there is now much more integration, probably because the "seaweed organics" are packed and labelled in the same way as the "chemicals", and have indeed been shown to increase the chemical's effectiveness.

CLIMATE change and global warming are issues which frustrate me but they can't be ignored in the context of good fruit and vegetable production.

As I've written previously (and many others), the climate has always changed and always will.

As to global warming, we kids in a tiny school in a cold valley in the Cotswold Hills were taken to a terrace close by and told that it had been a vineyard in the sixteenth century. 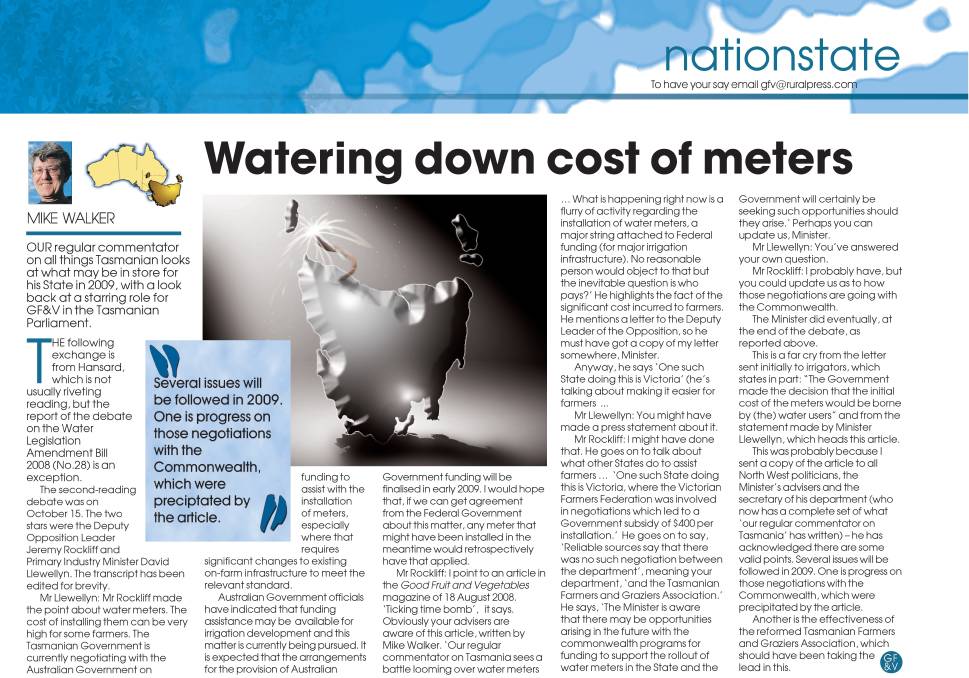 DEEP: One of Dr Walker's earlier columns, reviewing the cut and thrust of the Water Legislation Amendment Bill 2008 (No.28).

It wasn't possible to establish another one until the 20th.

"We've got to get rid of the mediaeval warming," is something which the activist Professor Phil Jones now wishes he'd never said

Yes, global warming is due mainly to increasing atmospheric carbon dioxide levels, but as I wrote in a previous article, these are nowhere near the optimum for fruit and vegetable growth and market gardeners routinely raise the level in their greenhouses.

This increase is global.

Think about it; all plant production is increasing because of this - for free. 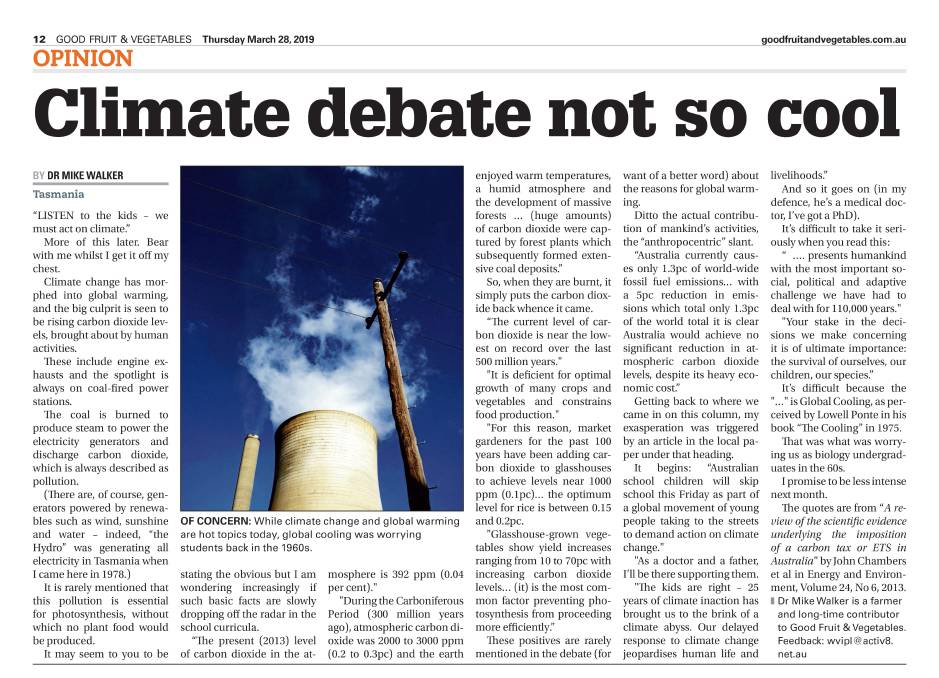 CHANGE: Climate change has been an ongoing topic of interest for Dr Walker throughout his columns, including this one from March 2019.

A one per cent yield increase is worth hundreds of millions of dollars.

I won't be around, but it will be interesting to see what the next 30 years bring.

NOTE: Good Fruit & Vegetables would like to take this opportunity to thank Mike for his contribution to the magazine over an extended period of time. His willingness to research a topic, combined with his insight into so many aspects of horticulture make him truly one of Tassie's brightest advocates.