In some ways, there are similarities between farming and journalism.

COVERED: Just some of the covers from Good Fruit & Vegetables from the past 30 years.

IT'S dangerous to talk about hard work to farmers.

They are, after all, some of the hardest working professionals in Australia. Long hours, mostly working solo, continually solving problems and meeting deadlines.

That said, putting this magazine together is hard work.

In a curious way, writing and editing a magazine is somewhat reflective of agriculture, albeit it with a lot less dirt and sun exposure. ("Screen burn" probably doesn't count.)

That "team" basically consists of two people (a sales manager and an editor).

It continues to tread that fine line of being outside the industry enough to report on and analyse, but inside the industry to be an advocate for it. It was launched at a time when there was nothing like it around.

These days it seems just about every crop under the horticulture umbrella has its own digital newsletter and printed magazine.

So why would anyone read "GFV"?

There is a difference to what we do. There is no organisation underwriting the publication here.

No grower levies channeled into it, no RDC or government department requiring mandatory acknowledgement at the end of every article.

It gives us the freedom, and responsibility, to report on such organisations, to ask questions of them if needed and to critique where required. 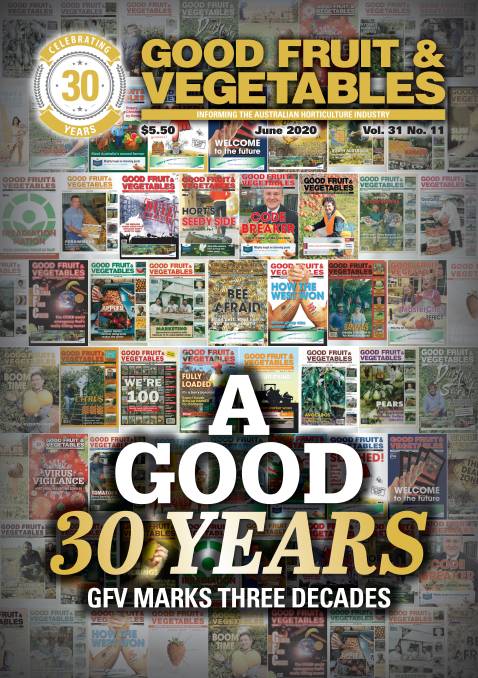 Slightly different wording but a common theme: being there for the industry.

It's not perfect - we know that. Sometimes names in captions are spelt wrong, issues aren't covered as in depth as they should be and not every commodity or region gets a fair mention but we do our best to be there for the industry.

In the current Australian media landscape where printed publications are falling by the wayside, 30 years is a milestone that should be acknowledged.

Like agriculture itself, we keep on going, grinding away, finding a way to bring the news to you. Like farming past or present, it's still hard work.

So, to the team behind it, the advertisers who support it, the subscribers who get it, the contributors to it and the readers who read it, on behalf of Good Fruit & Vegetables, thank you for a solid 30 years.

May we continue to inform for another 30.

Sponsored by
A glut in the avocado market is causing pain for Queensland farmers.
Test
'Past practice of putting all the onus on agriculture to both limit our emissions at one end but also capture emissions from other sectors has been recognised as wildly unfair.'
Test
The summit is an opportunity for the fresh produce sector and supply chain to come together.
Test
Workers across the south-west face job loss for not choosing to take a COVID vaccine after the government made it compulsory.
Test
Senator Susan McDonald, guest speaker at Rural Press Club of Queensland, provides update on vegan food labels inquiry
Test
Queensland's premier has released a plan for opening borders by Christmas, but it relies on vaccination rates.
Test
Growcom is guiding the development of the horticultural industry's strategic plan, called Future Fields.
Test
The mobility of seasonal workers will be key to reducing farm costs and therefore farm profitability.
Test