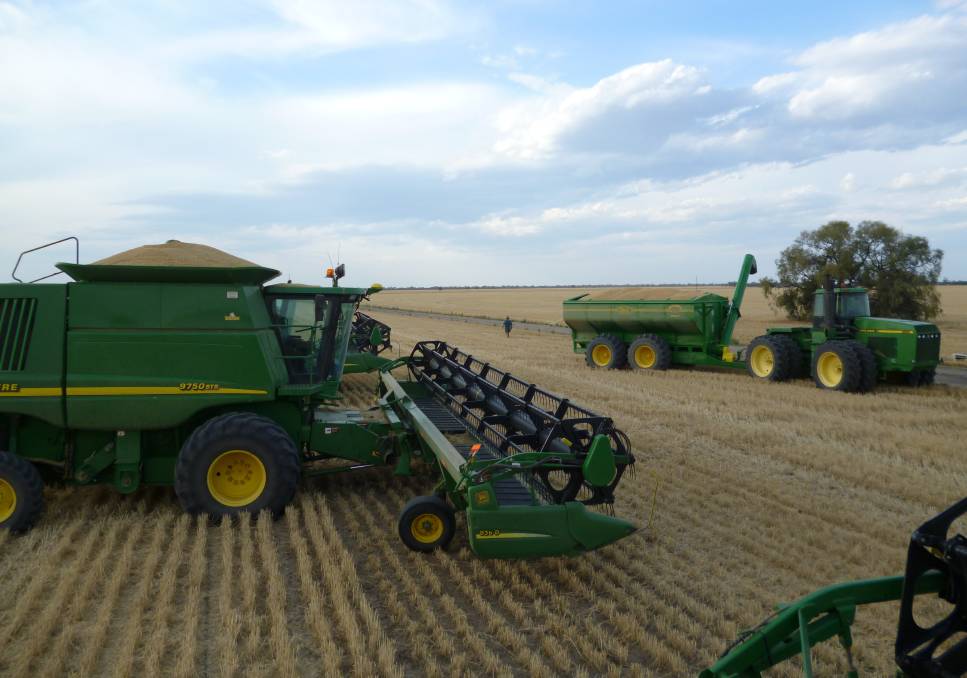 CONTRACTOR STUCK: Mercon contracting's Mick Findlay, Mitamo, is stuck on the Victorian side of the border, despite having a long term contract to harvest in Walgett, NSW.

There's been a renewed call for a national Agricultural Workforce Code, after more instances of travel restrictions on contractors and farmers have come to light.

While the recent announcements, expanding access to cross border communities, were a positive first step, Mr Fraser said a code would facilitate the safe and efficient movement of skilled workers, machinery and freight.

"I really welcome going back to the looser restrictions, for border residents," Mr Fraser said.

'That makes life ever so much easier for those who live right on the border.

"But that doesn't address the need for general agriculture to move workers and equipment in time for harvest."

He said a national code needed to be implemented as quickly as possbile.

"I don't think the states are communicating well enough with one another, it's just taking an unduly long time.

"This discussion has now been going on for three to four weeks, and we need to get some action, otherwise you risk a catastrophic failure, if the crop is not taken off."

He said it was up to the states to sign off on a national code.

"There will be certain conditions around it, but they are not conditions that can't be met," he said

"We aren't asking for agriculture to have an absolute 'free-for-all', we are just asking for a bit of common sense.

"It's just a mechanism whereby we can get machinery and workers to where they are needed to get the crop off - it sounds really simple, because it is."

Mick Findlay, Mercon, said he had seven headers, fuel tankers, maintenance trailers, vehicles, cooks and other staff, ready to go, but had not been issued a permit to enter NSW.

"We've spoken with Services NSW 16 times, regarding the issue of getting our harvesting machinery across the border," Mr Findlay said.

"Finally, they got back to us and told us that we would need to submit a special circumstances application, with all the associated proof of where we are staying and a letter from our clients verifying that we are desperately needed as a critical service."

NSW deputy premier John Barilaro has announced his government would shift the current two-and-half kilometre border zone with Victoria, back to 50-kilometres.

Mr Barilaro said quarantine hubs would be set up along the border to house agriculture workers crossing into NSW to work.

Mr Findlay said he had been harvesting in the Walgett area for 15 years, and was contracted to cut nearly 11,500 hectares of crops, this year.

Mercon had a COVID-Safe plan, as did all the farms where staff were going.

Mr Findlay said when he didn't hear back, after another seven phone calls and 575 e-mails, Services NSW contacted him again and asked him to resubmit all the paperwork that he'd already sent.

"And they then went on to say it was up to their discretion if they even got back to us at all,' he said.

When Mercon tried to get a permit to move the machinery on the back of trucks, the company was told it would have to commercially register all its equipment.

That included 30 metre comb trailers, which would have cost $22,000, and can only be carried on trucks.

"We would have to have roadworthies done on all of them, even though you can't register the trailers, as they are agricultural implements and are too long to be freighted."

He said he had been doing the harvest around Walgett for 15 years.

Mercon was also among Victorian contractors and farmers who were told they could only enter NSW, through Sydney airport.

Mr Findlay said his team had been booked to cut a significant amount of cereals, oilseed and pulses.

"We might lose a few hundred thousand dollars, but our clients are going to lose millions," Mr Findlay said.

"They've had six years of drought, now they can't get their contractors up there."

He said he had tried to explain the situation to staff at Service NSW, but they had responded by telling him the farmers would have to get someone else to do the job.

"I said, am I supposed to sack all my guys and hire NSW workers?

"They don't know how hard it is find a contractor with that many machines - there are only a handful of us big enough, to do the job."

Mr Findlay said all he wanted was a special services permit, to allow him to take his equipment across the border.

"We are just banging our head against the wall."

Went to Bordertown this morning. Happy to report it was a seamless process. Pleasant and efficient police and covid testers. Be interesting to see what happens after rules change tonight. pic.twitter.com/PCnns4W9p5

While he was recently able to get across to South Australia, because his address was 43km from the border, he said he was concerned about being stopped, in future.

"We have bought specific pieces of machinery from dealers in Bordertown, SA, that are under warranty." Mr Bennett said.

Dealers at Horsham, Victoria, were not able to service that machinery.

"There is quite a group of people, further out from the border communities, that still have machinery serviced in Bordertown.

"I'm hoping some common sense prevails, especially as numbers of Victorian coronavirus cases are declining - you would hope there was some flexibility, built into the system."

Meanwhile, Netherby grain and hay grower, Chris Schnaars, has been granted a permit, to get into South Australia.

He was prevented from taking a tractor, he wanted a Bordertown agricultural and equipment dealer to modify, 100 metres into South Australia, as he didn't have the appropriate permit.

And police stopped the agricultural dealer's staff from picking up the tractor, on the Victorian side of the border, as they didn't have a permit either.

Well what a stuffed up country we live in cant get tractor across border coz i from further than 40klm. Ag dealership cant walk 20 metre into Vic to drive it to dealership how bloody rediculous people in power need pull heads out there arse and understand how ag works.#numbskullspic.twitter.com/xxfRmWdtIQ

A spokesman for South Australia Police said some border checkpoints were initially inundated with people meeting at the border for the purpose of transferring sold items such as cars, bikes and trailers that were purchased on line or via phone call arrangements.

"This practice has been stopped due to the ongoing demand as well as the risk of COVID spread through contact points,' the spokesman said.

"Border staff have however been advised that if a person has an exemption as an essential traveller they are cleared to enter SA as per normal.

"While we won't comment on specific circumstances, if the receiving party has the relevant exemption, they would be clear to enter Victoria and return with the equipment."