INCREASING sustainability on farms is essential to ensure they remain viable into the future.

This is just what the Murphy family is doing on their Dunnstown potato farm in Victoria .

The Murphy family migrated to Victoria from Ireland in 1874. Patrick Murphy settled in Millbrook originally, with his son and his family moving to Dunnstown - renting Killarney mansion- in 1926.

Every generation of the Murphy family has grown potatoes in some capacity, including Leo (now 89), his son Greg and grandson Callum - who farm land purchased by Leo's father just up the road from where Patrick lived almost 100 years ago.

While their farm has steadily expanded over the years, there are many challenges facing potato farmers - from cheap imports, rising costs of production and a changing climate - that have required the Murphy family to make some changes to their moderately sized potato farming operation. 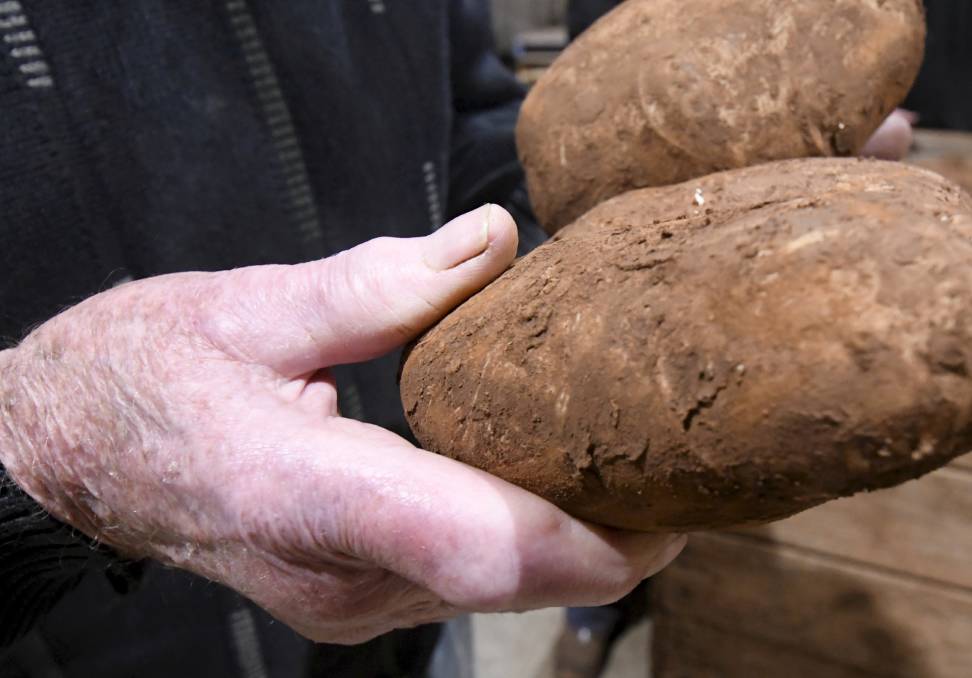 TYPE: The Murphy family grows about six varieties of potatoes, but it depends on how many they are trialling for McCain at any one time.

When Leo retired in 2000, he passed the farm on to his son Greg, who now runs it with his son Callum.

Together, they have been working to increase sustainability under the AP Murphy and Sons name.

This has included looking to agtech innovations to increase sustainability on the farm.

Faced with drought, Callum made the decision to revolutionise water use on the farm, through installing lateral irrigation.

This involves large machines travelling across the paddock to spray crops with water in a more efficient and sustainable way.

By using more efficient pumps, the technology saves a lot of water - about 20 to 30 per cent each year - in addition to about 15 to 20 per cent in fuel costs.

While costly, the Murphys have also purchased more efficient machinery.

Purchasing a new harvester, for example, has provided huge benefits and has allowed them to dig up 70 per cent more with the same amount of people.

"We are always looking at how we can cut costs some way or another," Greg said.

Leo's first potato season was in 1945, when he left school. In 1980, he made the financial decision to sign a contract with McCain Foods Ballarat as demand for potatoes was decreasing at local fresh markets.

The relationship with McCain has continued since then and now spans three generations.

AP Murphy and Sons currently grow about 180 acres of potatoes to be made into French fries each year.

The family has been working with McCain to trial new varieties of potatoes in order to identify crops that produce the highest yield, while requiring a reduced input. TOGETHER: They have been working with Agricultural Manager at McCain Foods Josh Opas to increase sustainability. Photo: Lachlan Bence

They grow about six varieties of potatoes, but it depends on how many they are trialling for McCain at any one time.

This year they have trialled two varieties in addition to growing the 'innovator' potato and a couple of wedge varieties.

McCain Foods agriculture manager Australia, Josh Opas, said potatoes were being trialled in an effort to find the ultimate variety that reduces the high grower costs in Australia while providing a higher yield.

Reducing grower costs will also reduce costs for McCain, so it can be more competitive in a marketplace filled with cheaper imports.

"It's so important now that we produce more for less," Mr Opas said.

From the traditional Russet Burbank potato that takes between 150 to 160 days from the time the seeds are planted until they are harvested, newer varieties can take up to 130 days.

But McCain thinks it can do better. It is trialling potatoes that have a shorter growing season so they are more environmentally friendly, but also so the yield can be harvested and driven to the factory quicker.

"And of course, if it makes golden, crunchy chips."

While over the years many of the region's small potato farmers have moved on to other ventures as they have been unable to make ends meet, the Murphys hope that by continuing to adapt to changes, potatoes will continue to be grown on their land for generations to come.

And the viability of their farm isn't just important for the family, but McCain too - as without local growers, McCain will have no potatoes to package and sell.

It's something I enjoy doing. I like watching the crop from start to finish and knowing that you've worked pretty hard to get it to where it is when you see a good quality crop driven out the gates. - Callum Murphy, potato grower, Dunnstown, Vic

Mr Opas said that while a few years ago McCain was worried about how many older potato farmers were stepping away from the business, many of their sons have since stepped up to take over.

"They really like the innovation and the precision agriculture like using satellite imagery and all the other tools that we have now," he said.

"It really keeps them interested so there is a lot more confidence now that younger farmers are stepping in."

He enjoys being a potato farmer and hopes to continue doing it for the rest of his life.

"It's something I enjoy doing. I like watching the crop from start to finish and knowing that you've worked pretty hard to get it to where it is when you see a good quality crop driven out the gates," he said.

"It's something to be proud of. It's not really a job for me, it's just something I enjoy doing."

Both growers and McCain are keeping a close eye on new innovations and equipment that is being developed overseas, to see if it can be introduced here.

The story Why these farmers are increasing sustainability on their farm first appeared on The Courier.