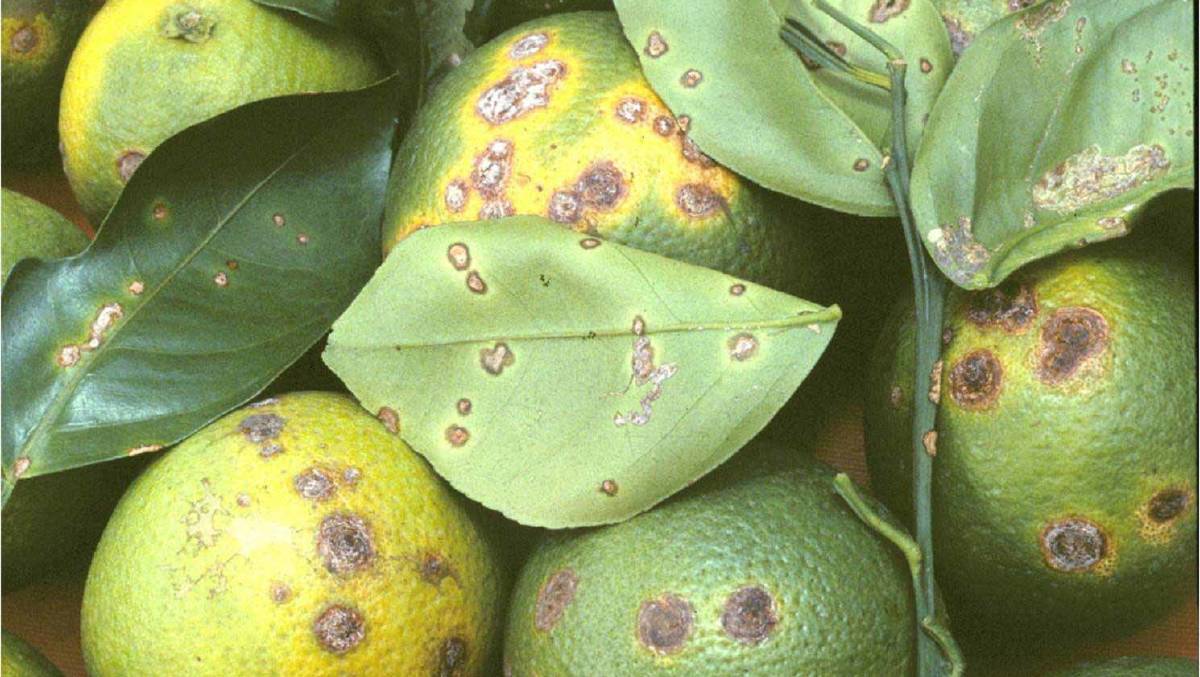 FREEDOM: The effects of citrus canker on fruit. The Northern Territory is on track to prove it is now free of the disease.

The NT is claiming the eradication of citrus canker as a success story.

THE Northern Territory citrus industry is determined to prove it remains free from from citrus canker.

The Northern Territory Government implemented the National Response Plan version five, which was developed and implemented this year.

This version is focused on verification of absence and proving freedom in the NT by the end of 2020 with the overall aim and outcome to remove regulatory measures across Australia and return to baseline surveillance.

Apart from outlining the plans for continued surveillance, the document also details the work that has gone into bringing the dreaded citrus disease under control.

Delimitation and surveillance activities to support the eradication efforts were completed at the end of 2019.

During this phase of the program, 16 infected premises (IPs) were confirmed in the NT from 532 samples (32 positive) and more than 15,000 plant inspections.

This resulted in the establishment of 13 restricted areas (RAs), consisting of a declared quarantine area within a 600m radius of an infected plant, and two larger control areas.

Within these RAs there were 3942 premises (property lots) and 5102 residences (including multiple unit blocks in urban areas).

Surveillance was completed at all premises within RAs by September 2019. A total of 1570 properties (39 per cent) were identified with host plants.

A total of 6192 host plants were removed in the RAs by December 2019 (via cut-stump method and herbicide application of Garlon in-ground, and completely removed if in a pot).

Not all property owners were cooperative to the control measures it seems, but the document shows that the program successfully resolved access to 240 properties for completion of surveillance and removal activities, where entry was initially refused.

All properties where host plants were removed via cut-stump method (not potted plants) have undergone two rounds of re-growth surveillance.

Of the 4626 plants surveyed, 10pc (465) of plants showed signs of non-symptomatic regrowth. In these cases, regrowth material was removed and the stump treated with a further herbicide application.

Following removals, a host free or fallow period was established in all RAs. The host free period was lifted in Katherine on November 20, 2019, and in the greater Darwin rural area (GDRA) on March 20, 2020, removing all RAs and associated restrictions.

The two control areas will remain in place until area freedom is declared for the NT.

A further 6939 plants were surveyed in Darwin and 1047 surveyed in remote locations as part of the Areas of Interest surveillance.

"The program transitioned into gathering evidence of absence from citrus canker in early 2020 to support the NT's claim of successful eradication," the document said.

"This evidence will be collated into a 'proof of freedom' report which will be submitted to the national committees for consideration by the end of December 2020.

"On acceptance of this claim, the remaining restrictions and controls on citrus host plants in the NT, as well as the other states and territories will be lifted, and there will be a return to normal trade and surveillance across Australia."

In a positive tick for program managers, the program realised significant savings during 2019 which enabled the resourcing of the final phase of the response within the overall agreed budget.

This meant no additional funding was required to support the indicative budget for the National Response Plan version five.

"The program has continued to track under budget during 2020 and is expected to achieve significant savings against the indicative budget due to ongoing efficiencies," the document said.