Wool growers are being encouraged to put fleeces aside after this year's spring shearing to enter into the 2021 Australian Fleece Competition. 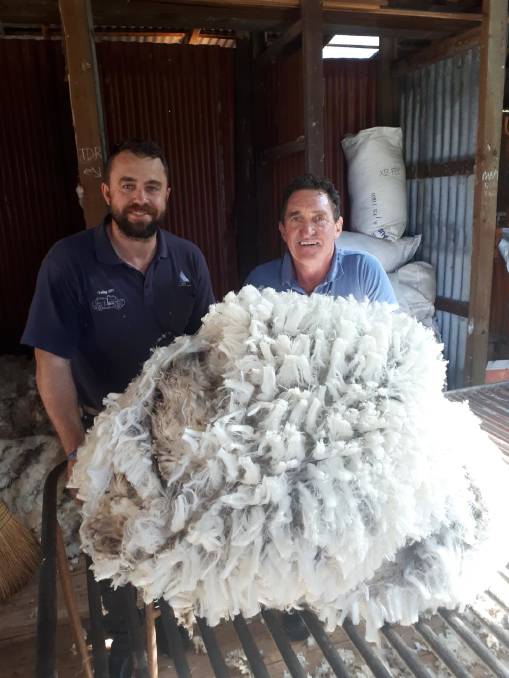 The son and brother of Dennis Gleeson - who passed away in 2018 after being diagnosed with MND - Tim and Butch Gleeson in their wool shed at Costerfield, Vic. Dennis Gleeson was the reason MND Australia was nominated as the supported charity of the Australian Fleece Competition.

Wool growers are being encouraged to put fleeces aside after this year's spring shearing to enter into the 2021 Australian Fleece Competition.

The competition was meant to be held for the 20th time in July this year at the Australian Sheep & Wool Show (ASWS) in Bendigo, Victoria, but was cancelled as a result of COVID-19 lockdowns.

Instead, the 20th anniversary event will be held next year and the committee has set an ambitious target of displaying 500 fleeces, to break the previous record and cement the competition's place as the largest fully measured fleece competition in the world.

Competition convener and Nutrien Bendigo wool account manager Candice Cordy encouraged anyone who had ever entered the competition before to put a fleece aside for next year's competition to help make it the biggest and best yet.

"The competition provides a fantastic opportunity for exhibitors to showcase their fleeces in the largest fully measured fleece competition in the world and receive feedback and benchmarking data on the processing performance of their wool," Ms Cordy said.

"The competition showcases all major wool types, from ultrafine Merinos through to every type of British breed.

"The performance class caters for growers who shear at 6-8-month intervals and provides really interesting results, including the length and value of wool grown on a per week basis."

"When it began 20 years ago it was one of the first objective measurement fleece competitions and whilst there are more now, this is one of only a very few to benchmark the commercial processing performance of fleeces," Ms Falconer said.

The nominated charity for next year's event is Motor Neurone Disease Australia, which will receive funds from selected fleece sales once the competition is over.

Daniel Woodrow from MND Australia said it was "a special outcome" to be nominated by the wool industry.

"The Australian Fleece Competition is a major event on the calendar and we are thrilled that significant awareness will be shone on this disease and the critical support our association provides to people living with MND," Mr Woodrow said.

He said MND Australia's mission was to provide and promote the best possible care and support for people living with MND.

"One of the most significant services and one that will benefit greatly from this event is our equipment service which acts as a specialised library with an extensive range of aids and assistive equipment that is loaned out at no cost to the person with MND and allows people living with MND to stay safe, independent and engaged with their communities for as long as possible," he said.

"The association is set up to provide the best possible care and support to people living with MND no matter where someone lives.

"We help people live better for longer and that rings true equally to those in regional areas.

"As soon as someone is diagnosed with MND, no matter their location, they will become registered with the association and begin receiving the required care and support at absolutely no cost to them."

Koole Vale Merino and Poll Merino stud principal Alan Harris, Costerfield, Vic, nominated MND Australia to be the chosen charity for the competition, after the death of a close friend and client to the disease a couple of years ago.

"Our good friend, neighbour and ram client Dennis Gleeson, who got MND a few years ago, passed away two years ago," Mr Harris said.

"He was a really good mate, and was the first person to buy a ram off me.

He said the Australian Fleece Competition was a great way to benchmark your stud against the best of the best.

He has entered it for 20 years and taken home champion and reserve champion ribbons in that time.

But the most rewarding part of his experience with the competition so far was his parents and also Mr Gleeson's family winning commercial ribbons in the past with fleeces that had been bred using his rams.

Mr Harris has been supporting MND Australia for some time now.

"At our ram sale last year, we offered anyone the option to have their rams shorn and the proceeds donated to the charity," he said.

The story Set a fleece aside for world's biggest fleece competition first appeared on Farm Online.