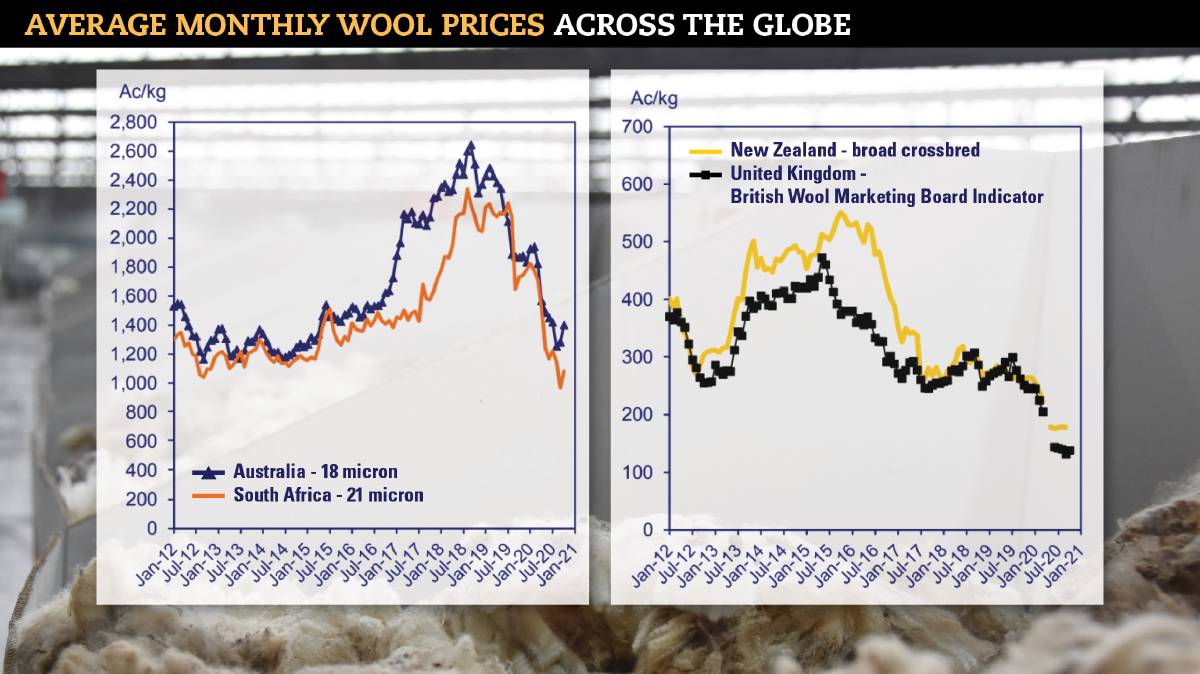 Wool prices in other major wool producing countries have been hit hard as a result of COVID-19, just like Australia. All prices in the graph are in clean basis. Source: NCWSBA, AWEX, Capewools, BWMB, NZ Wool Services

Have Australia's price declines also been seen in other major wool producing countries?

Despite slight rises in the last four weeks, the Australian wool market has fallen dramatically in the last six months as a result of the COVID-19 pandemic and its associated lockdown measures.

But have these price declines also been seen in other major wool producing countries such as South Africa, New Zealand and the United Kingdom?

"In South Africa, which produces mainly Merino wool of 21 micron and finer, prices have followed a similar trend to that seen for Australia," Mr Wilcox said.

"For example, since March, the South African 21-micron wool has declined by 37 per cent.

"By comparison, the Australian 21-micron price guide has fallen by 39pc."

He said the NZ and UK market trends had been similar.

"Prices for broad Crossbred wool - 32 micron and broader - in NZ and the UK had remained flat at low levels for three years before the start of 2020, while finer Merino wool and medium wool prices saw a significant lift in 2018 and 2019, particularly for Merino wool," he said.

"For NZ and UK growers, they thought it couldn't get much worse.

"Unfortunately, the impact of the COVID-19 pandemic has seen prices tumble yet again."

Mr Wilcox said of the two countries, prices in the UK had fallen back more dramatically.

"Since March, the British Wool Marketing Board Market Indicator has fallen by a further 33pc in Australian dollar terms, and is down by 26pc in pound sterling," he said.

"The indicator in September was the lowest for 20 years or more, at just 132 Australian cents a kilogram or 74 pence a kilogram.

"In NZ, the strong wool indicator has fallen by 20pc since March, a smaller decline than seen for UK wool.

On the export side of things, new data from the Australian Bureau of Statistics indicated that Australia exported 12 million kilograms of wool valued at $91 million in August, taking the progressive totals to 32mkg - up 7.4pc - and $245 million - down 29.3pc.

Exports to China were up by 70.9pc in August and up by 23.5pc in the July to August period.

They accounted for 81.4pc of Australia's exports in August and for 85.2pc in the year to date.

A total of 93.1pc of Australia's exports of wool of 19 micron and finer went to China and 2.4pc went to Italy.

The story How does Australia's wool decline compare to other countries? first appeared on Farm Online.