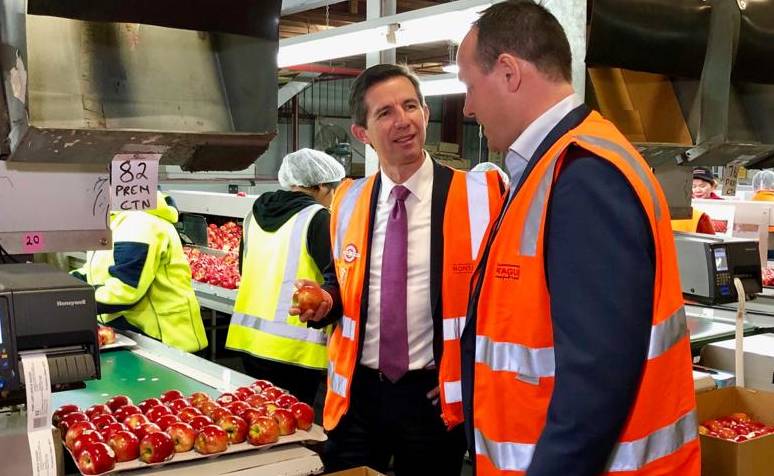 Farmers will have to weigh up the risks of doing business with China.

"This is going to be a challenge that is with us for a very long time - long after my time in this office," he told an Agribusiness Australia presentation.

He urged agribusinesses and exporters to assess their own potential exposure to any possible arbitrary policy risks from Beijing, and "potentially look elsewhere to develop markets" if they felt the need.

Australia had enjoyed a long and mutually beneficial relationship with global economic powerhouses China and the USA.

It was a keen supporter of Chinese economic growth and the trade benefits and life saving prosperity its market reforms had brought to the Asian region.

Australia must stay true to our goals while acting to protect our interests and our security - Simon Birmingham, Trade Minister

However, our two nations had distinctly different government systems and values and "there are always going to be tests and stresses in that relationship".

Importantly, decades of exceptional trade growth and relationship building between the two had triumphed previously, despite points of tension.

UNFORTUNATELY, recent "assertive" Chinese behaviour had created new pressure points, and revived some old ones, for our $13 billion agricultural market in China.

While Australia would not deviate from its values and policies and from "protecting our interests", Australians still respected China's role as our biggest trade partner and a strong regional economic partner.

At the same time, the US was clearly our biggest investment partner, a close ally and the world's biggest economy.

"Australia must stay true to our goals while acting to protect our interests and our security," Senator Birmingham said.

"Our intention is to engage (with China) and assist our respective interests as much as we can."

He acknowledged Australia's position in the Asia-Pacific and trade loyalty to two different economic powers presented new challenges and lingering tensions which farmers and agribusinesses were feeling first hand.

New 80 per cent tariffs were imposed on barley exports to China this year, some beef export certifications revoked, and wine exports are now under anti-dumping scrutiny, while subtle challenges have also been mentioned against other commodity sectors.

However, these tensions had to be "navigated with a steady course and resolve".

Senator Birmingham said all parties and allies had to see Australia as a country that would not deviate.

We want the whole region to prosper - Simon Birmingham

"We wish to see China's economic growth continue," he said.

"We want the whole region to prosper and it needs to be done in an environment of mutual respect, and respect for international laws, and respect for the sovereignty of the region - a wish that applies to all partners in our region."

Forum host and Agribusiness Australia chairman Mark Allison was heartened to hear the Trade Minister's "calm, pragmatic approach to the China trade situation", but queried what was being achieved practically and diplomatically to accelerate alternative trade achievements.

SENATOR Birmingham said while China still offered significant economic growth opportunities, Asia in general would be invaluable in driving a rebound from the COVID-19 recession.

Indonesia, India and Vietnam were examples of valuable emerging economies where exporters could seek far out greater value chain opportunities.

The newly-minted free trade agreement with Indonesia meant more than 99 per cent of Australian exports could now arrive in the 260 million-strong marketplace duty-free or under significant preferential market conditions - a boon for new trade openings.

By November he expected the Regional Economic Co-operation Partnership with 15 other countries in the Asia-Pacific would enhance supply chain integration with ASEAN members and other neighbours, and he was in talks with his Indian trade counterpart to activate economic co-operation discussions following the recent strategic partnership agreement signed by both countries.

Negotiating the removal of non-tariff barriers such as shelf life restrictions on vacuum-packed red meat in the Middle East had saved exporters $60m in the United Arab Emirates alone.

FURTHER afield a free trade deal with the high income European Union, which already bought $1.6b in Australian food and agricultural goods a year, was on the horizon, and another with the UK was likely to conclude this year.

Other potential free trade talks were being accelerated if possible, but too much speed created the risk of a poor deal with inadequate trade gains.

Meanwhile, in response to China's dumping decision against Australian barley imports, new markets for malt barley were being pursued in the Middle East and South East Asia.

"We don't believe the Chinese investigation results were justified, but we want to respect that decision and give time for it to be reviewed and re-assessed in a way that is more evidence based," Senator Birmingham said.

If Chinese authorities maintained their verdict Australia would take its case to the World Trade Organisation.