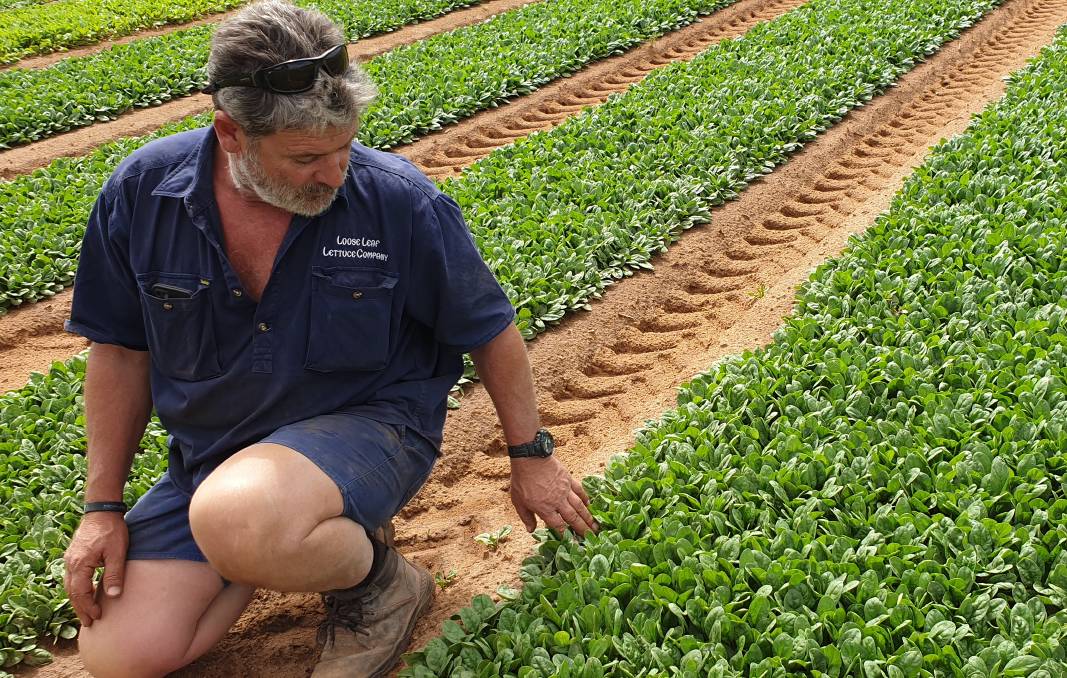 MASSIVE SAVINGS: After using Sabel-X on his spinach, Kevin Dorba was able to increase the survival rate of his crop. He went from losing 80pc of his crop to losing only about 2pc.

It's important to get the best possible performance out of your crops. That's why Sabel-X Endophytic Trichoderma is such a game changer.

Regardless of the season, it is important to get the best possible performance out of your crops.

Growers understand the value of good soil health for their operation to be sustainable. So, it's little wonder producers spend a significant amount of money each year on inputs to improve their soils.

However, new research has shown that the genetic interaction between the plant and the soil microbes is just as important as what's in the soil.

For this reason, many producers across the country are embracing a ground breaking new product that enhances this interaction between the plant and the soil microbes. Sabel-X Endophytic Trichoderma is more than 30 years in the making and has been proven to be effective, time and again, in multiple field trials across the country.

As its name suggests, this Trichoderma is Endophytic - meaning it lives inside the plant - and helps the plants to switch on gene sets that trigger and activate microbes within the rhizosphere (root zone).

"This is very important", Sustainable Farming Solutions' Neil Innes says, "because through scientific experiments we know microbes in the rhizosphere induce genes and metabolic pathways within the plant to improve productivity".

Up until now, producers have taken advantage of the positive impact of rhizosphere microbes by improving soil health to increase their numbers or by adding one or a group of microbes to the soil.

"Sabel-X is a game changer because it triggers the genes within the plant to work more effectively with these rhizosphere microbes," Mr Innes explained.

"When you use Sabel-X Trichoderma, it essentially coordinates the activity of the beneficial rhizosphere microbes and acts like a coach to amass the best 'A Team' of microbes at any given point in time," he continued.

"Research shows the Sabel-X Trichoderma switch on more genes, literally hundreds of them, which means more rhizosphere microbes are activated.

"We know the Sabel-X Trichoderma create signals to attract microbes in the root zone involved in critical processes including improving utilisation of nutrients, uptake and utilisation of moisture, stress and disease resistance and improved photosynthesis."

Sustainable Farming Solutions has been working in the sustainable ag space for more than 25 years and say Sabel-X Endophytic Trichoderma is one of the most impressive products they have come across.

They are the exclusive importer and distributor of the product in Australia. They're also conducting ongoing field studies, which have resulted in some stunning success stories.

In another trial, conducted on a crop of field tomatoes in Bundaberg where first plantings had historically low yields caused by adverse growing conditions, the tomatoes treated with the standard biological program increased typical yields by 29pc above the long term average. However, adding Sabel-X Hort increased yields by a further 38pc (ROI - 109:1) above the standard biological program.

The same trial found that adding both Sabel-X Hort and Mycogel (liquid mycorrhizae) increased the yields by a further 50pc (ROI - 67:1) above the standard biological program in these difficult growing conditions.

This is not a unique story, a Victorian trial treating onions with Sabel-X Hort returned an exceptional $8 for every $1 spent on Sabel-X Hort.

Meanwhile, in WA a producer who was losing up to 80pc of his spinach crop every summer, was able to increase his survival rate to 98pc, whilst a soybean producer in Bundaberg increased his crop yield by 26pc.

Another great success story comes from an Avocado producer who put Sabel-X on some sad looking trees to see if he could revive them.

Within six weeks, they had bounced back, so much so that they not only looked visually healthy but almost indistinguishable from his others. At that point, he decided to end the trial early and treat his entire orchard with it.