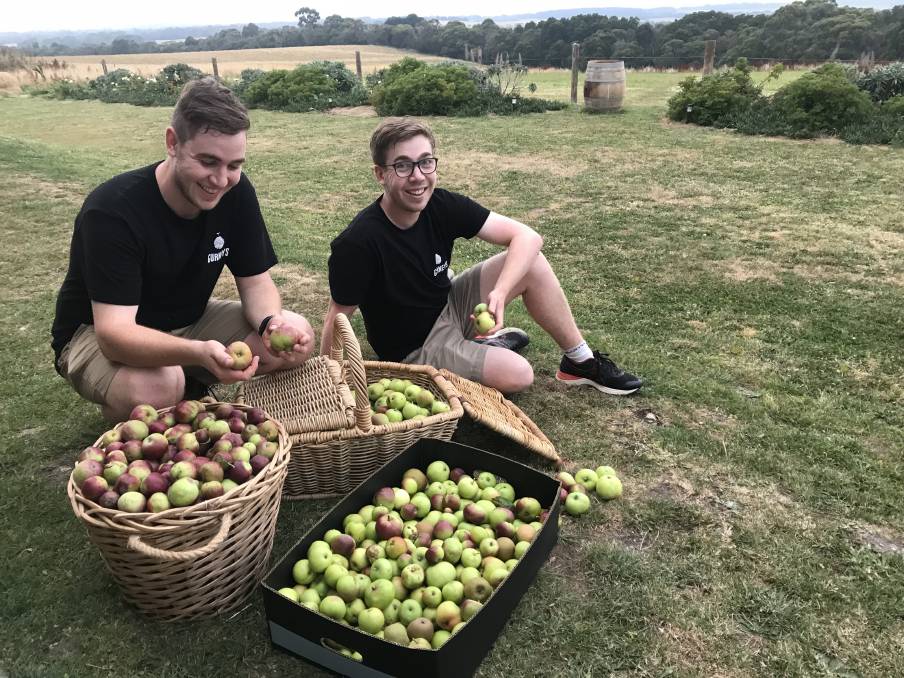 APPLE PICKERS: Tom and James Gurnett with a haul of apples, ready for turning into cider.

Heritage cider, with a twist, at one Gippsland orchard and cidery.

ONE Gippsland family is honoring its English heritage, by producing cider - but with a twist.

"Apples are an important part of where we grew up," James Gurnett said.

But having started with more conventional varieties, the family is now branching out into making cider from many of the wild apples that grow in the area.

"There is a local pear orchard, but we are probably the only commercial apple orchard within an 80-kilometre radius," he said.

"But driving around the area, there are tonnes and tonnes of wild apple trees."

Every autumn James said he and his brother Tom drive around the district, to try and find the best trees.

There was one lane in the area, which he likened to "an apple supermarket," due to the number of wild trees growing there.

"You try and drive up and find the one that continuously produces good crops and from which we are able to take cuttings. We have no idea what they are, they are all unique," Mr Gurnett said.

Wild apples were used in "scrumpy" cider, a dialect word for a "rough" product, made from unselected apples.

"I am the monkey of the family, I go up the tree and shake all the apples down," Mr Gurnett said.

"The idea is that, one day, we won't have to drive around, and we will be able to produce the scrumpy from our orchard."

The idea is that, one day, we won't have to drive around, and we will be able to produce the scrumpy from our orchard. - James Gurnett, Gurney's Cidery

They've even named some of the varieties.

"We have got a Railway's Crab Apple, which we found along the old railway line," he said.

"Someone has thrown an apple out of a train, 50 years ago, and we also have a Toora Stoneblock, we found around the hills around Toora."

The other technique Gurney's uses is wild fermentation of the apples, a "hands-off" technique, which had some interesting results.

"You juice the fruit and let it turn into cider, by itself, there is yeast on the skin of the fruit, which is used to ferment the fruit," Mr Gurney said.

"It's a pretty risky method, because each time you do it, it's different.

"We embrace the fact that every single batch is different."

After emigrating to Australia, James said the family started looking for a way to honor their heritage.

"We come from cider country, in the UK, Somerset,and we have always wanted to do something agriculturally based," he said.

We planted as many different varieties as we could, to see which ones grew well, and which didn't, because we are so reliant on 'chill hours'. - James Gurnett, Gurney's Cidery

"We looked at getting into wine, but there wasn't really a connection to our history."

Mr Gurnett's father, Bill, was a park ranger, who spent a year on exchange at Wilson's Promontory, prompting the family move to Australia.

"It's all self taught - although my brother Tom studied at the Cider and Perry Academy (Hartpury, Gloucestershire). We do a lot of learning, on the job," he said.

In the past five or six years they've put in, between 2000 and 3000 trees, with the aim of putting in another 1000 a year "just to keep it manageable, as we do all the grafting and orchard development work.

"We planted as many different varieties as we could, to see which ones grew well, and which didn't, because we are so reliant on 'chill hours'," Mr Gurnett said.

"We put in a lot of the French varieties, that have done very well."

The Gurnett's were also moving away from growing traditional cider apples, and towards regionally specific varieties, partly due to climate change.

Local apples had adapted to the area and were likely to be more robust.

"If you go to Somerset, or Devon, northern Spain or Normandy (France) you have all these apple varieties that are unique to the actual region, you can't find them anywhere else in the world," he said.

"We really highlight the importance of trying to bring the culture to cider making."

"You can try and make English style cider, but there really isn't and Australian style of cider,

As part of the Prom Coast Food Collective, they have managed to weather the coronavirus pandemic, through home deliveries.

Mr Gurnett said Gurneys was now seeking to create its own traditions.

"I think its really cool, when you go back home, and you go to a local pub and see an old guy drinking a pint of cider. It's that culture we are trying to create.

"One day, I would love to see an old guy drinking a pint of Gurney's cider, at the Foster pub."

The story Nod to a cider heritage first appeared on Stock & Land.