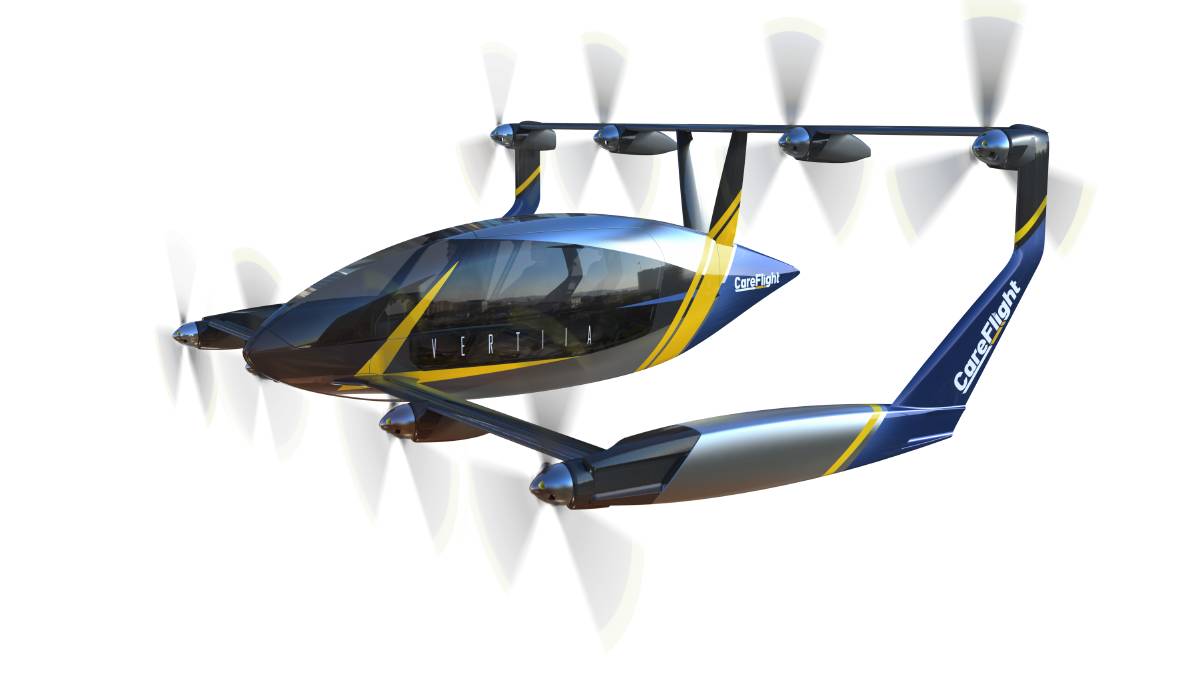 VERTIIA: Welcome to the future of air transport, an electric vertical take off and landing aircraft.

Welcome to the future of air transport, an emissions free, electric vertical take off and landing aircraft.

WELCOME to the future of air transport, an electric vertical take off and landing aircraft powered by eight electric motors and capable of cruising at a speed of 300km /hour.

Set to be in the air by as early as 2023, Vertiia will have an initial range will be 250km on battery and 800km-plus on future hydrogen power.

The aircraft is claimed to be far safer than helicopters, and is significantly quieter than combustion engine aircraft like helicopters.

An air-ambulance version of the incredible new aircraft was officially launched by its developer AMSL Aero in partnership with aeromedical organisation, CareFlight, in Sydney this week to tackle rural and regional healthcare.

Vertiia is currently being built at AMSL's aerodrome at Bankstown Airport, with test flights to take place at its facility in Narromine, NSW.

A model for a pilot and four passengers for commercial transport services is also being developed. "Unlike aeromedical planes that require a runway, Vertiia will carry patients directly from any location straight to the hospital, significantly reducing the complexity and time transporting vulnerable patients," Mr Moore said.

"Australia's expansive geography and low population density makes this technology especially valuable, with other crucial applications including airlifting people during bushfires, or transporting rural patients for preventative healthcare and testing, instead of waiting until the point of critical illness, injury, or risk of death."

CareFlight medical director Dr Toby Fogg said the long range, flying speed and ability to land and take off and land like a helicopter meant regional patients could be taken directly for treatment. "Initial scoping and modelling suggest that with Vertiia we would be able to reach more Australians," Dr Fogg said.

"For example, the price point of operating Vertiia versus helicopters and fixed wing aircraft would mean we can purchase a much larger fleet aircraft, by several multiples.

"The lower operational costs would allow us to hire more doctors, nurses and paramedics."