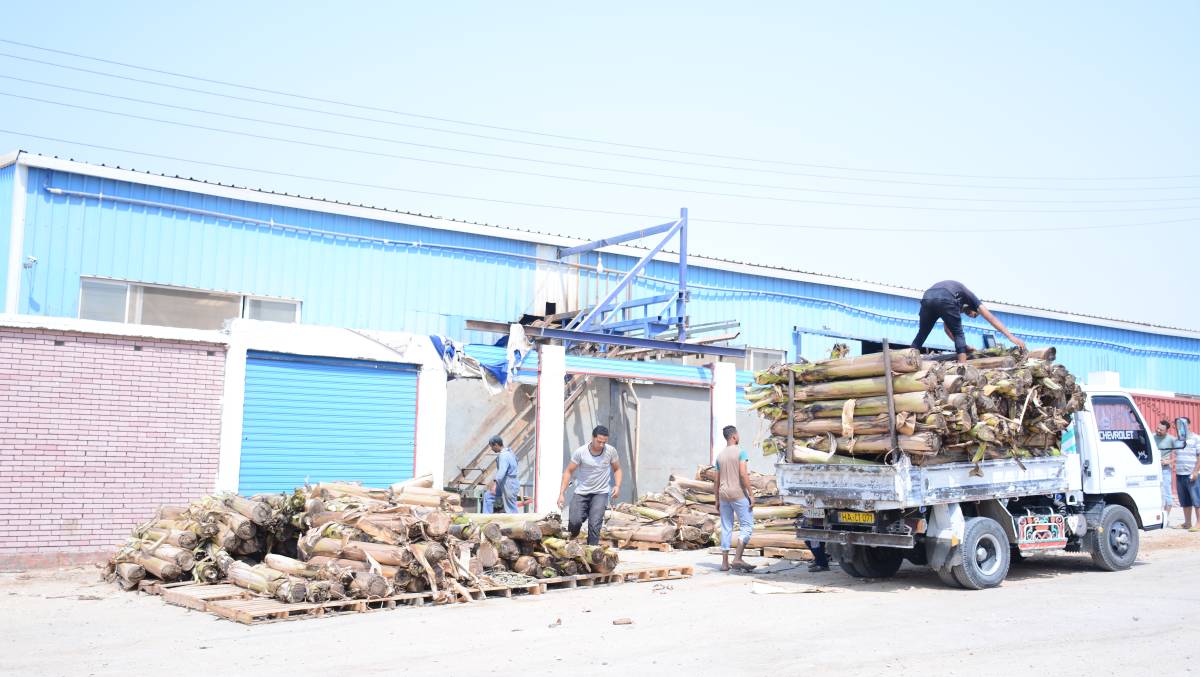 LOADED: Workers unload waste banana trees at the factory in Egypt where it is turned into wood and paper products.

An Adelaide business is making paper and cardboard products from banana plants.

A PUBLICLY-listed company that has spent more than two decades perfecting its system of turning banana plantation waste into wood and paper products says it has proven the profitability of the technology and is preparing for a global expansion.

Papyrus Australia, which is based in Adelaide, South Australia, watched its share price triple last November after announcing L39 as a cornerstone investor and reporting that its Egyptian factory has become profitable for the first time.

The company has developed technology to process banana waste into a range of products including veneer for furniture and musical instrument manufacture, moulded products such as food containers and plates, liquid fertiliser and garden peat.

It now aims to increase production in the Sohag factory, hire key staff and embark on a significant capital raise with the help of L39 Capital, which will allow it to manufacture 'turn-key factories' and sell them to banana plantations in developing countries around the world. 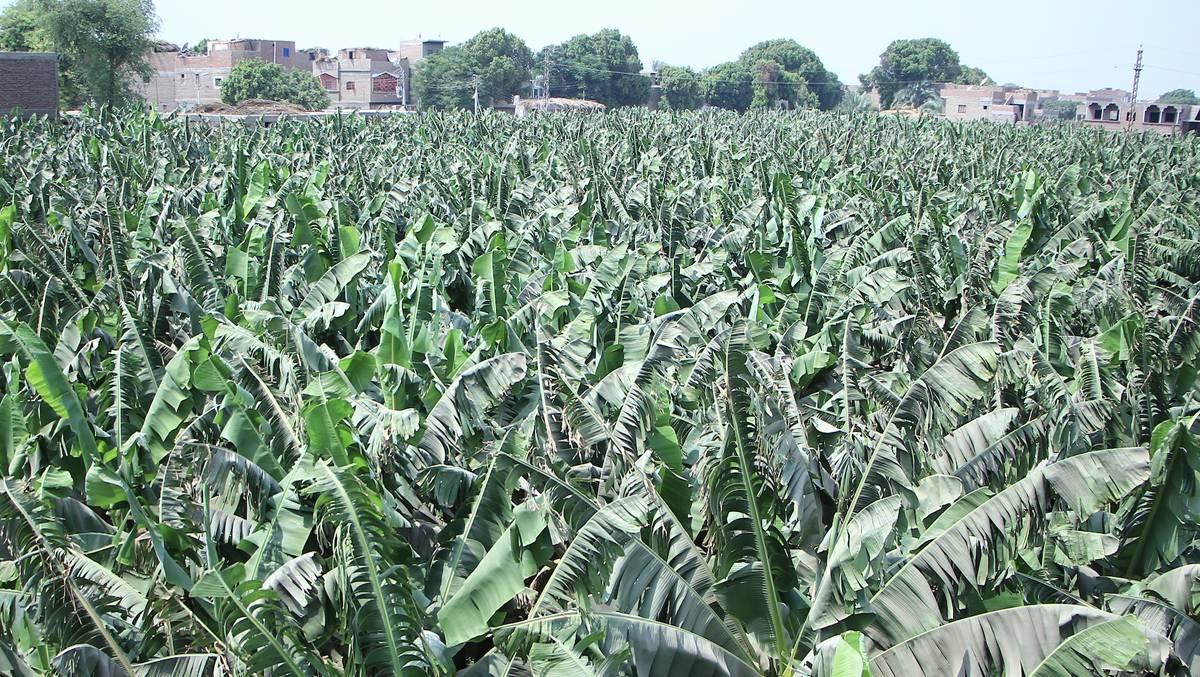 Papyrus Australia was founded in Adelaide in the mid-1990s after Ramy Azer moved to Australia with his Adelaide-born wife Phoebe to complete a Masters in Mechanical Engineering at the University of Adelaide.

He soon developed a technique for producing veneer from banana tree trunks and has since expanded the technology to include all parts of the waste banana plant.

"The question is always asked 'what is an Adelaidean company doing in banana land'?" Mr Azer, the company's managing director said.

"But we are not banana processors, we are machine builders and technology makers so what the Adelaide company is actually doing is designing and building machines for export and commissioning in banana producing countries."

Unlike other fruit trees such as apples and oranges, a banana palm takes six to eight months to grow to maturity, producing one large bunch.

The tree is then cut down and left to rot and a new shoot is grown in its place.

This creates a lot of waste but Mr Azer said it also created a lot of opportunity as it provided a constant supply of fresh feedstock.

"There is plantation waste ready to be taken away from the farm every day of the year so when we set up our factory next to the banana plantation we are guaranteed to have a quality and quantity of raw materials coming to us all year round, which is a massive advantage compared to any other residual crop," he said.

The company listed on the Australian Securities Exchange in 2005 and spent the next five years building two prototype machines.

A machine was initially set up on a banana plantation at Walkamin near Mareeba in Far North Queensland. 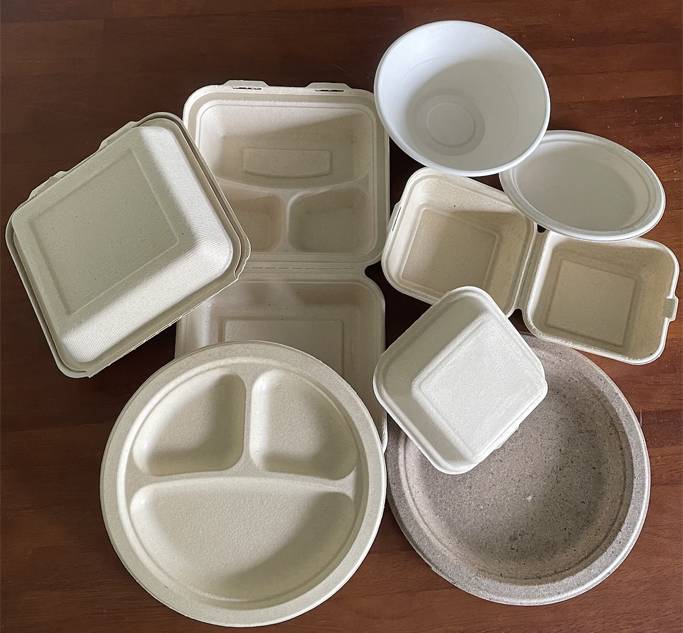 USE: Food containers made from the banana waste.

However, Mr Azer said the remote location on the Atherton Tablelands, an unreliable backpacker workforce and huge transport costs made that project unsustainable.

"We also needed to demonstrate that it was a viable industry and technology to operate in developing countries that produce 99 per cent of the bananas."

More than 160 countries in the world produce bananas commercially, with Australia one of the very few developed nations among them.

The company began setting up Papyrus Egypt, a joint venture with the Egypt Banana Fibre Company, in 2011 but political unrest in the region meant it could not commission its machines until 2017.

Mr Azer spent most of this year in Egypt, producing commercial products at its factory in Sohag, adjacent to a 500-acre banana plantation. SUPPLY: Some of the raw product within the production process.

In a statement to the ASX this month, Papyrus Australia reported its September sales increased by 43 per cent on August and a further 34 per cent in October to about $A22,500 (256,000 Egyptian pounds).

"We can't keep up - we have no issue with selling, no issue with pricing, our issue is just producing enough. We need more machines and more trained people," Mr Azer said.

Chairman Ted Byrt said the corporate focus now and for 2021 was to build a second factory in Sohag to produce moulded products and improve the productive capability of the existing banana tree fibre factory.

The second Egyptian factory will use fibre produced by Papyrus Egypt to make about 20 million lunch boxes and moulded trays such as egg cartons and pizza boxes a year.

"It will take about six to 12 months to complete the model in Egypt and have all of the financial verification of it done and audit it properly so its profitability is known and can be proven," Mr Byrt said.

"In the meantime we'll start gearing up for 2022, which will be the year of design and assembly of the new machines here that will go off to fill the orders we are getting." WORKERS: Staff at the Papyrus Egypt factory in Sohag.

Mr Azer said despite the difficulties posed by COVID-19, 2020 crystalised 25 years of work.

He said the next phase of capital raising was now a priority.

"To convert science into technology and convert it into a production line involving real people in the real world takes time and there are lots of issues that needed to be resolved," he said.

"We've been running production trials at other people's factories using our fibre and our technology but now it's time for us to build our own factory next to our existing factory so that when we sell the model, we sell the complete model of bringing in the waste and producing liquid fertiliser, soil conditioner, food packaging and veneer.

"We want to sell this complete model so people can take the banana waste and very quickly produce millions of food packaging products to displace a lot of the plastic that's killing this planet.

"Our company needs good strong relationships and joint ventures with big companies - strategic alliances with machine builders who can really produce lots of machines, install and commission them and train people, move products from place to place and introduce them to global markets."

Mr Azer said while much of the manufacturing would take place overseas, the control modules for the technology involving the intellectual property and the assembly would likely be done in Adelaide.

"I think we will leave the heavy lifting to bigger manufacturers like China and we will do the clever bits," he said.

The first Egyptian factory already employs about 30 people directly and many more indirectly through the harvesting and transportation of the banana waste.

However, he said there were also huge opportunities just in Egypt.

"We only collect raw material from less than 500 acres of banana plantations around the factory - this is about 300,000 trees that are harvested every 7-8 months," Mr Azer said.

ENROUTE: A truck loaded with more banana plants ready to head to the factory.

"The state we are in has more than 10,000 acres of banana and Egypt as a whole has about 100,000 acres of plantations so if we just stay in Egypt there is a potential to put in up to 200 factories and Egypt is not even in the top 10 banana producing countries.

"The old European idea of knocking down forests to produce fibre on a large scale to produce paper, timber, wood, packaging and everything else doesn't have a place in our existence anymore.

"Now we value the forests for producing oxygen and providing natural habitat for wildlife and catchment areas to regulate rain yet our appetite for packaging is increasing."