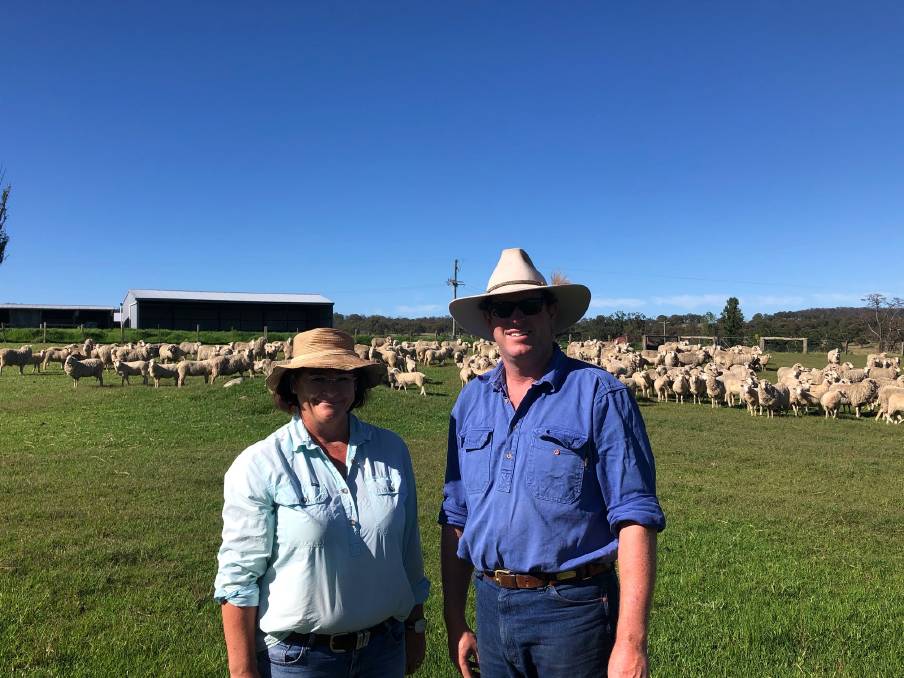 Ben and Felicity Foster are committed to the prime lamb sector, focusing on White Suffolks.

From the ground up, Castle Doyle growers Ben and Felicity Foster are making improvements to boost sheep numbers for prime lamb production and grow their livestock business.

Their flock expansion plans are dependent on being able to lift pasture productivity to enable higher stocking rates.

This is being tackled with a strategic approach to re-sowing rundown native pastures with annual ryegrass, followed by planting perennial species across about 110 hectares each year.

The Fosters have a combination of owned and leased land covering 1740ha in the Armidale area, where the family has a long-established background in growing top quality superfine Merino wool.

Today they produce about 60 bales of 17.5-micron wool from their 2600-head purebred Merino flock and sell this directly to Italian processors through New England Wool's Reda Future Project Group.

The Fosters also run 400 head of cattle for breeding and steer trading, and grow fodder crops to provide finishing feed through the winter months.

He said this would provide diversity of income and flexibility in marketing to optimise returns and reduce business risks. 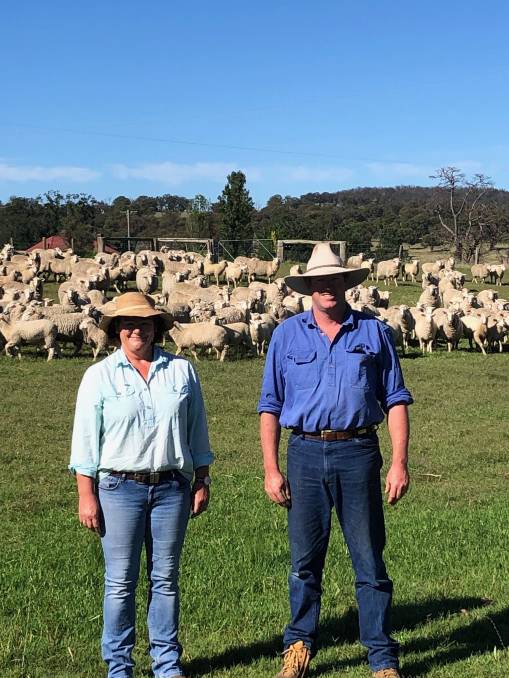 The Fosters join Merino-Border Leicester first-cross ewes to White Suffolk rams for ease of lambing and high growth rates in their flock.

The Fosters currently have 500 Merino-Border Leicester first-cross ewes that are mated to White Suffolk rams, and the plan is to triple the size of this flock in coming years.

"We want to get to 1500 crossbred ewes, while retaining the same Merino wool flock and cattle numbers," Mr Foster said.

"Like for many of us along the east coast, current high sheep prices are slowing our restocking progress.

"We have been buying sheep from across the state when we see an opportunity, but it is going to be a slow process."

The Fosters mate their first-cross Merino-Border Leicester ewes to White Suffolk sires that they have been sourcing for many years from Rick Gates' Gates Performance Genetics. They also use his Angus bulls.

Mr Foster said last year, they mated some purebred Merino ewes to the White Suffolks to get more prime lambs on the ground while wool prices were subdued, and meat prices were high.

"Using the White Suffolk cross gives us flexibility," he said.

"The lambs are a lower birthweight, but grow quickly to get to 55-60 kilograms liveweight by time of sale in a typical year."

The Fosters predominantly aim for this weight range to meet specifications for both the export and domestic markets.

This year, while Australia's lamb exports are experiencing a slight slump due to implications of COVID-19 on overseas restaurant and retail sales, they will sell lambs at slightly lighter weights of 45-50kg/head for domestic customers.

As red meat prices are so strong, their marketing will start in February, when they plan to sell weaner lambs straight from their mothers at weights of 45-50kg/head.

"We sell through an agent to the bigger processors, or through the saleyards as store lambs if prices are 'hot'," Mr Foster said.

He said their prime lamb system was set up for joining in April to lamb when pastures were in the maximum growth phase in spring.

Lamb growth rates of 200-300 grams per head per day could be achieved on pastures at that time of the year, depending on rainfall at the time.

If finishing lambs to higher weights, growth rates of 300-400g/head/day were made by grazing on improved annual ryegrass and fodder crops and supplementary feeding with cereal grain.

The Fosters are working to improve the total farm feed base for their sheep flock by incrementally sowing perennial varieties - covering about 110ha of their properties each year. 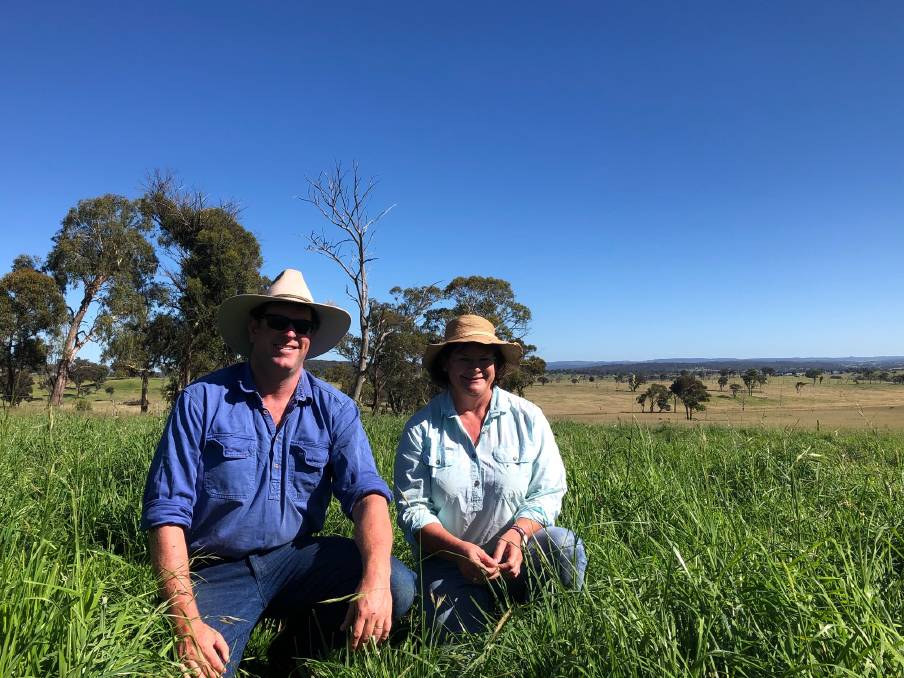 Ben and Felicity Foster are using perennial pastures after re-sowing rundown native pastures with annual ryegrass to increase their livestock feed base.

"When we have increased the value of our feed base, we can grow our sheep numbers and push stocking rates a bit harder to lift the overall performance of our farm business," Mr Foster said.

He said genetic performance was the other main profit-driving factor in a livestock enterprise.

He knew he was making good gains in key traits by using the Gates Performance Genetics' rams because he always selected in the stud's top 10 per cent of its annual sale draft.

"The Gates are located in our environment and we know their White Suffolks will have easy lambing for higher ewe and lamb survival and fast growth to post-weaning - leading to faster lamb turnoff and higher returns," he said.

Gates Performance Genetics measures every commercially-relevant trait, starting with weighing and tagging every lamb at birth and then recording weaning, early post-weaning and post-weaning weights, fat and muscle scan results.

This data is entered into Lambplan for analysis and performance information.

Mr Foster said at the top of their family's requirements from the stud were White Suffolk Australian Sheep Breeding Values (ASBVs) for low birthweight, fast early growth and eye muscle depth - which he said was a good indicator of growth and yield.

"We like the Gates' use of measurements and indexes and we always chose rams from the top of the values so we know we are getting similar performance in our commercial flock," he said.

"We let the stud do the work in genetic selection and we reap the rewards."

In recent years, the Fosters have recorded a significant increase in the fertility of their prime lamb flock - through higher twinning and lamb survival rates - and were trending up on lamb growth rates.

In the immediate future, their plans are to continue building-up the sheep and cattle enterprises post-drought and to carry on with pasture improvements.

"We had the worst ever rainfall on record in 2017-19 and then 2020 was a remarkable turnaround, so we are quietly confident going into 2021," Mr Foster said.