Its all in the family for the Zerks, who produce Angus on dryland pasture in SA.

Five generations of the Zerk family successfully carried out a range of farm business enterprises in the Barossa Valley before the latest at the helm settled on beef and wine grapes.

Jordan Zerk currently manages the 200-hectare property that was settled by his ancestors Joachim and Caroline Zerk in 1846 at Altona, near Lyndoch.

He and his wife Megan are continuing the Angus cattle operation set up by his parents Robert and Janine, who started as grape growers and dairy farmers before shifting into beef cattle in 1998.

The family's vineyard is also still set up on 64ha for production of grape varieties that are hand-pruned and used for premium wines.

Situated about 280 metres above sea level, and with a northerly aspect, this is an ideal area to grow top quality wine grapes without the need to irrigate vines.

With their children Ike (now in heaven), Amaya, Francie and Greta - and help from Mr Zerk's father - the family runs 50 Black Angus cows and a Black Angus bull from Rosleigh Black Angus Stud on 140ha of dryland pasture area.

Pasture improvements are ongoing and hay is grown for cattle feed.

Mr Zerk said their Angus cows were crossed with Friesians before being put back to the Angus bull as first-crosses.

"Ten of these excellent mothers were reared by my son Ike, who showed a keen interest in cattle from a young age," he said.

"All of us are passionate about our Angus operation."

It was a whole family affair - including Uncle Carmy - when the Zerks visited Pinnaroo-based Roseleigh Angus Stud in the Mallee in 2012 to choose their first Angus bull.

"We have been buying bulls from the stud - which is one of the oldest Angus breeding operations in South Australia - ever since," Mr Zerk said.

"The stud principals, Ron and Matt Cowley, make it easy for us because they deliver to the farm.

"We love Angus cattle, after switching from Murray Greys in the late 1990s, because they seem to be the best performing breed in our local environment."

The Zerks join cows in May, which is soon after the annual bull sales, and calve during the grape vintage in February and March.

"We select bulls with low Estimated Breeding Values (EBV) figures for birthweight and find our cows and heifers have very few problems with calving during our busiest time of the year," Mr Zerk said.

"We are also selecting on EBVs for growth to achieve progeny with fast weight gains."

The aim is to produce vealer steers weighing more than 400 kilograms at 10-months-old, ready to be sold in December.

The family mostly sells stock through the Dublin market to feedlotters. PERFORMERS: The Zerks are happy their Roseleigh bulls provide the fertility and growth they are seeking, as well as optimium feed efficiency with the available feed they have.

Mr Zerk said he was confident his herd's genetic progress in growth traits was tracking alongside that of the Roseleigh stud herd, which fed wide-ranging data into Breedplan.

"The Cowley's know that we deal with many tough seasons in this region and they don't focus on high marbling and too much minus on rib and rump fat, which can lead to fertility and 'doing ability' problems," he said.

"Roseleigh bulls are giving us the fertility and growth we are seeking, as well as optimium feed efficiency with the available feed we have.

"Frame size is also important to make sure that what we feed the cattle is contributing to maximum liveweights.

"After all, we are paid in dollars per kilogram of beef produced."

The Zerks rotationally graze their dryland, native pasture paddocks every 21 days and choose the best paddocks for cutting hay - which is done by their neighbor.

Peak periods for feed are in spring and, in a typical year, the Zerks start feeding hay towards the end of February - just prior to cows starting calving.

In 2011, the family successfully trialed the use of the Outback oat variety for grazing.

That first plot was about 10ha, sown in May, and it provided valuable grazing for 60-head of breeders and calves for four time periods that year.

Grazing started in August and stock were then rotated every three weeks.

Mr Zerk said it was a great learning opportunity and had led to expanded plantings now covering an area of about 20ha of outback oats and a further 20ha is sowed to pastures. We are also using moby forage barley.

"Outback oats have delayed heading, so are able to provide more feed over a longer time period under good seasonal conditions," he said.

"After several grazing sessions, they still regenerate and can be up to 30 centimetres tall going into the hotter months."

The Zerks now sow the oats opportunistically as part of their long-term pasture establishment program to boost the cattle grazing feed base at the end of spring and into summer. 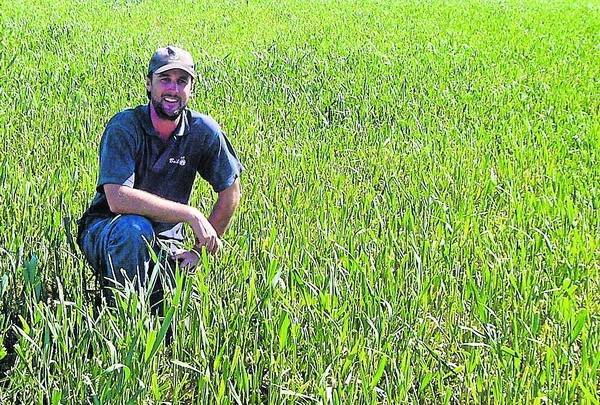 POSITIVE SEASON: There was an excellent turnaround in 2020 due to high rainfall of about 550mm by mid-December.

It is planted at a rate of about 50 kilograms per hectare and fertilised with some DAP and ProGibb (after the second grazing) to assist crop development.

Mr Zerk said, in his experience, achieving success with the oats started with good soil preparation and weed control.

"Another benefit is the oats provide an efficient 'break' to clean-up problem weeds, such as soursobs and Salvation Jane," he said.

Mr Zerk said the past few years in the region had been challenging for graziers, with wide seasonal variability.

"During the 2019 season, the rain cut out in September and we had very little feed over summer," he said.

"Our rainfall was only 375 millimetres - down from the long-term average of 500mm.

"We were pumping water non-stop, so our cattle had plenty to drink - but it was a stressful time for anyone in agriculture."

The 2020 season was a complete turnaround, due to high rainfall of about 550mm by mid-December.

"We have so much more dry feed in the past 12 months and may get away with not using any hay at all this summer," Mr Zerk said.

The family's philosphy for the future is to continue developing their beef genetics and production gains through the good business relationships they have established with their stud.

"We plan to keep buying bulls from the Roseleigh 'legends of the Mallee'," Mr Zerk said.

"We will always be looking for that next great bull to keep improving our herd."

The story Cattle and vineyard are a family affair for the Zerks first appeared on Stock Journal.