The Local Hero nominees include Dr Kirby White, left (with Dr Nicole Townsend holding up a gown) from Victoria.

They provide a helping hand wherever it is needed, be it drought, COVID-19, finances or family violence.

Two weeks into this year's COVID-19 outbreak Bendigo doctor Kirby White realised there was a problem - regional and rural Victoria doctors could not get access to disposable gowns due to hospitals "sucking up the supply".

Her response? She helped co-found Gowns for Doctors, which has provided thousands of re-usable gowns to doctors during the pandemic.

Dr White, who works at The Bendigo GP Clinic, trialled several homemade gowns with her colleague, Dr Nicole Townsend, before finding a design that was "suitable and practical" and looked for support from other GPs. The initial aim was to produce 1000 gowns for the Bendigo area. 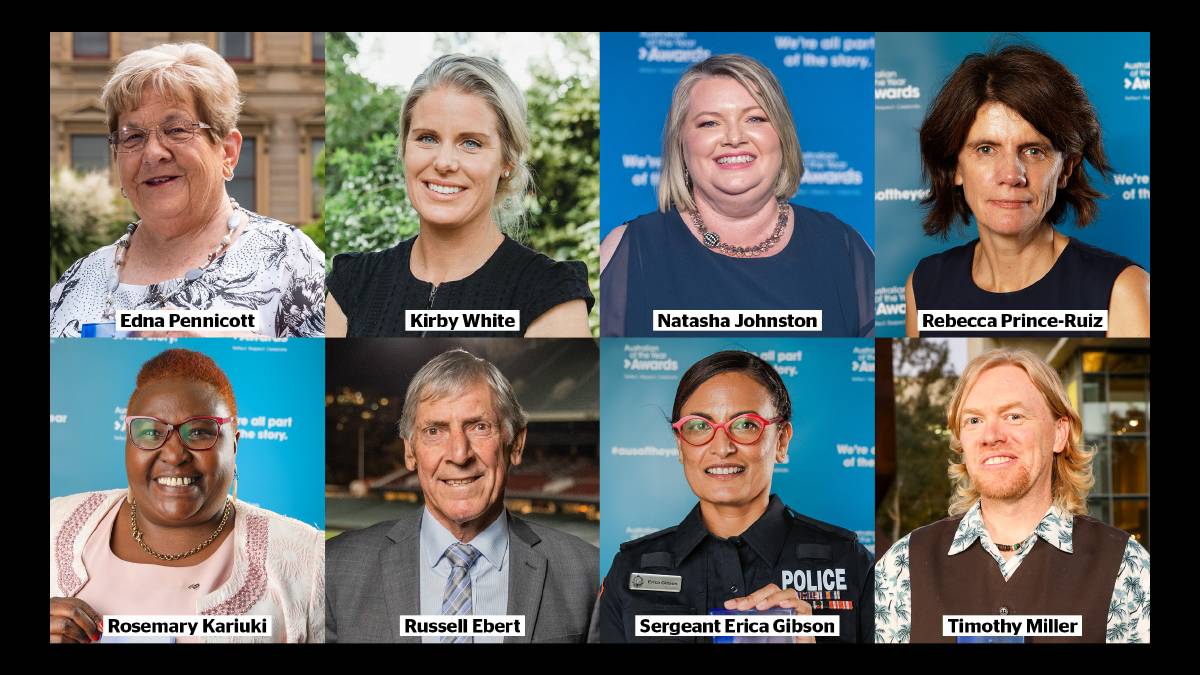 "It blew out of proportion in the first month, so we started a GoFundMe, lobbying not-for-profit organisations, government and businesses to support us. Never in my wildest dream think be as big as it is," Dr White told ACM's Bendigo Advertiser

"... I often think the true heroes (of Gowns for Doctors) has been the local community, the volunteers sewing and the small businesses who have donated time and effort in supporting the project," she said.

Dr Kirby, representing Victoria, is now in the running to be named Australia's Local Hero of 2021 as part of the Australian of the Year Awards, which will be announced in Canberra on January 25.

She is grateful that the honour might help "shine a light on this insidious issue of domestic violence".

"If I can be a voice for that, then I'm very happy," she told ACM's Katherine Times.

GET TO KNOW THE FINALISTS

The following biographies of the 2021 Australia's Local Hero finalists have been supplied by the organisers of the annual Australian of the Year Awards, the National Australia Day Council. ACM, publisher of this masthead, is media partner for the awards. 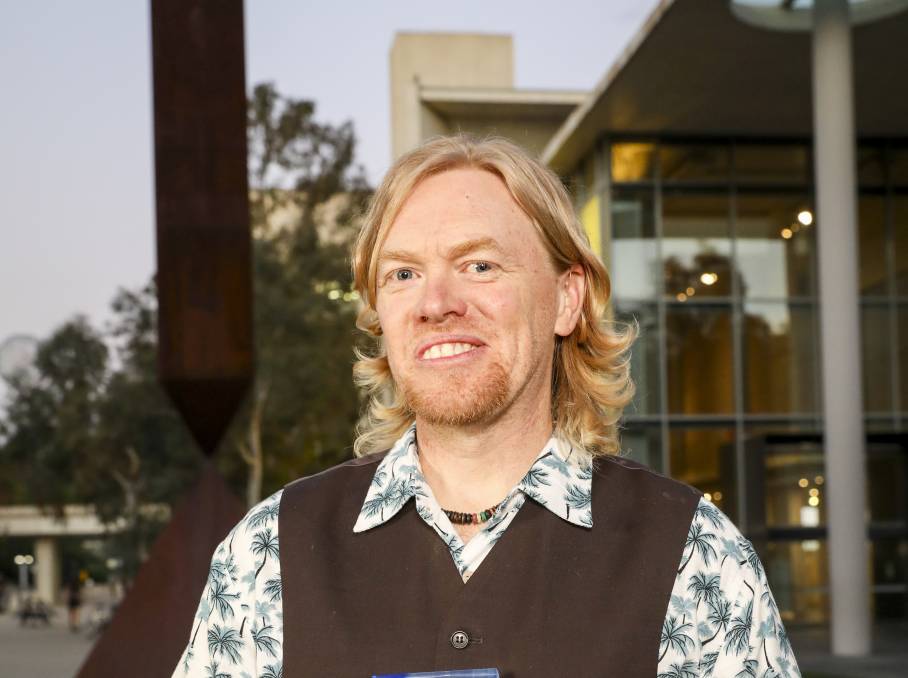 Timothy Miller runs Lids4Kids, a national organisation which encourages households, schools, businesses, and organisations to collect plastic lids to be recycled into sustainable products for children.

He has also used his passion for cars to take part in outback rallies to fundraise for various charities that help sick, disadvantaged, or disabled children.

Lids4Kids now has over 25,000 participants across Australia. Tim coordinates leaders from all states to spread the message about Lids4Kids in their communities and collect, clean and sort lids from drop off points around towns and cities. His efforts have saved millions of lids from landfill, while educating children about the issue of plastic waste and empowering them to take action. 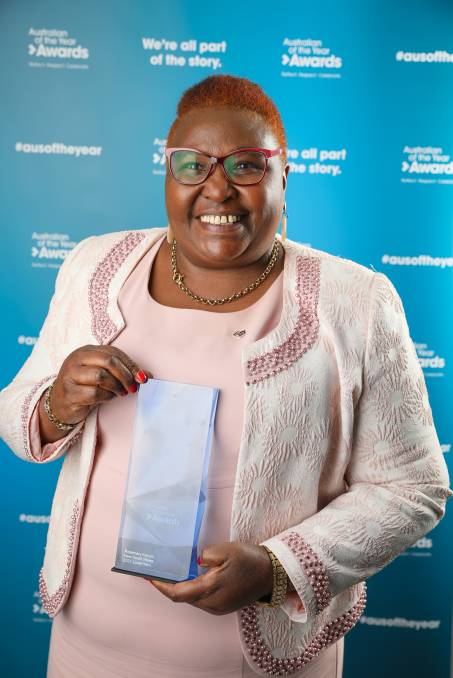 Rosemary Kariuki with her state award. Picture: supplied by australianoftheyear.org.au

Rosemary Kariuki is the multicultural community liaison officer for the Parramatta Police. She specialises in helping migrants who are facing domestic violence, language barriers and financial distress.

Fleeing Kenya alone in 1999 to escape family abuse and tribal clashes, her lonely early years in Australia helped Rosemary recognise that isolation is a huge issue for many migrant women.

Many aren't used to going out alone, have no transport and speak little or no English. So she devised ways to help women leave their house and meet women in similar circumstances.

She also started the African Village Market - a program to help migrants and refugees start their own businesses - which ran for four years.

Rosemary's warmth, courage and kindness inspire all who meet her. Her work was the subject of the documentary 'Rosemary's Way'. 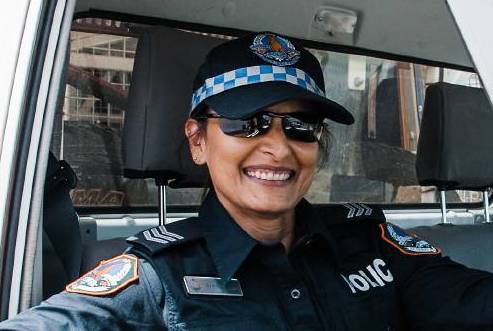 Sergeant Erica Gibson is an engaging and enthusiastic leader who is creating safer communities for Northern Territory women.

A police officer for more than 30 years, she passionately drives and supports community programs that help to combat family violence.

Erica oversaw implementation of the Family Safety Framework program, which provides a network of safe homes in remote communities for people in domestic violence situations.

She was also a key organiser in Nhulunbuy's inaugural White Ribbon Day event, which raised approximately $50,000.

In 2016, Erica was appointed a member of the RCAG Regional Community Advisory Group for Top End Health Services.

And in 2017, she received a Telstra NT Business Women's Award.

A keen mentor of other women in the police force, Erica's integrity and leadership inspire others to make positive change. 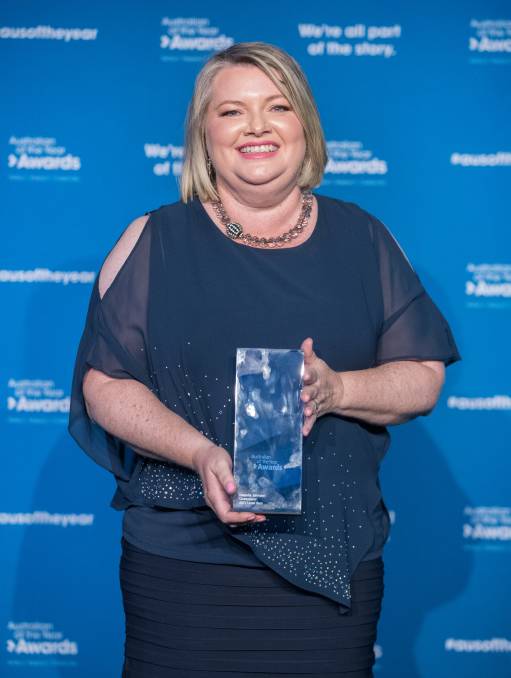 Natasha Johnston with her state award. Picture: supplied by australianoftheyear.org.au

Natasha Johnston is the founder and director of Drought Angels, a service that delivers care packages and financial assistance to thousands of drought-stricken farming families across Queensland and New South Wales. Natasha and her friend Nicki Blackwell were inspired to help after hearing stories of farmers struggling to put food on the table. After loading a ute with supplies to take to one family in 2014, they soon started responding to calls for assistance from other families in urgent need.

Drought Angels is a unique service that provides a listening ear in addition to financial assistance and food hampers. This personalised support is a lifeline for farmers who often don't reach out for help. Natasha's work plays a vital role in reducing rates of depression and suicide, as well as helping to keep farmers on their land.

Thanks to her hard work and dedication, Natasha frequently receives heartfelt responses of gratitude.

Russell Ebert with his state award. Picture: supplied by australianoftheyear.org.au

Former footballer Russell Ebert OAM is a legendary figure with the Port Adelaide Football Club. A four-time winner of the Magarey Medal, awarded to the best and fairest player in the South Australian National Football League, he's considered one of the club's greatest players of all time.

Today, Russell continues to give back to the club and the South Australian community through his leadership of the club's Power Community Ltd youth programs.

He is particularly passionate about the Power to End Violence Against Women program, which he delivers to Year 10 students around the state. Developed with Centacare Catholic Family Services and the South Australian Department for Education, the program challenges gender-based attitudes and promotes respectful relationships and an end to domestic violence. The program has reached more than 5000 students since starting in 2016.

Russell is also a passionate supporter of children living with disabilities and is a fundraising ambassador for disability services organisation, Novita. 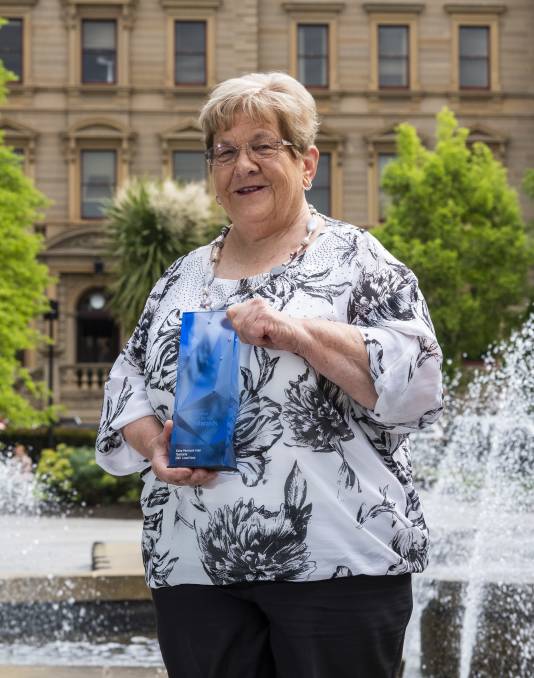 Edna Pennicott with her state award. Picture: supplied by australianoftheyear.org.au

Kingborough Helping Hands delivers care packages of food and other essential items for community members who have fallen on hard times. Edna collects these goods herself and personally delivers many of the packages. At Christmas, she organises the packing and delivery of around 250 hampers and 300 children's presents for families in need.

Through Kingborough Helping Hands, Edna supports several local women's shelters, providing household essentials, furniture and clothes for women and children who are fleeing domestic violence. She also operates an after-hours mobile van service that offers hot food and support to people who are sleeping rough. The majority of the group's programs are community-funded, and Edna is the driving force behind all fundraising activities.

Edna recently received an inaugural Aurora Energy Lifetime Achievement Award in recognition of 40 years of dedicated service to the most vulnerable members of the community. 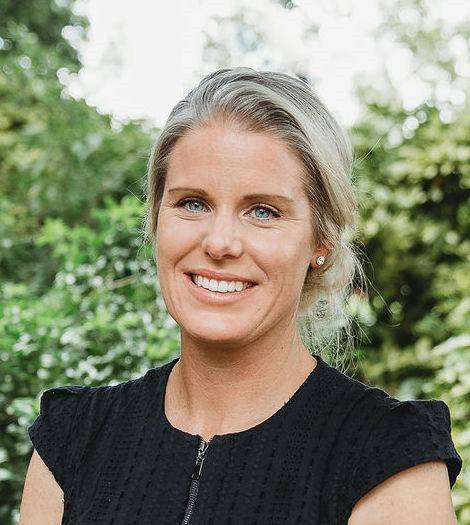 When Bendigo GP Dr Kirby White's supply of disposable gowns ran out in the third week of the COVID-19 outbreak, she and colleague Dr Nicole Townsend decided to act. Together, they developed a gown that could be laundered and re-used, allowing them to keep seeing patients.

From their own need, Gowns for Doctors was born. To fund the initiative, Kirby raised more than $40,000 through a GoFundMe page, and by lobbying local, state and federal organisations and governments. She then engaged local volunteers and commercial textile companies - even her own wedding dress supplier - to make the gowns.

Kirby has now produced well over 5,200 gowns, supplying more than 750 regional Victorian GP clinics with these essential garments. She has also built up a stockpile of surplus gowns, which are ready to go out to other clinics when needed. A dedicated and passionate GP, Kirby often checks up on patients late in the evening.

She has gone above and beyond for her community and regional Victoria. 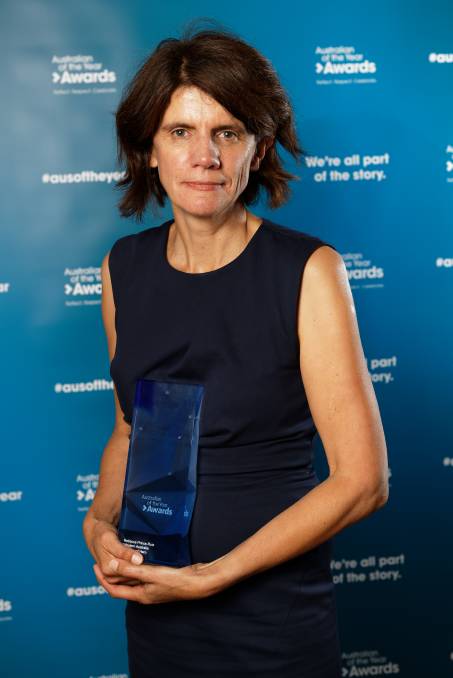 Rebecca Prince-Ruiz with her state award. Picture: supplied by australianoftheyear.org.au

Rebecca Prince-Ruiz is the founder of a global movement that helps millions of people be part of the solution to plastic pollution.

Ten years ago, Rebecca became concerned by the amount of plastics going into landfill and encouraged her family to go plastic-free for the month of July. Her idea is now a global initiative, with an estimated 326 million people participating worldwide.

Rebecca has worked with state governments and business leaders on reducing single use plastics and is on the board of the government's Container Deposit Scheme - a new recycling program for WA. At a local level, Rebecca engages with community groups by hosting presentations and workshops for schools, aged care facilities and other community groups.

Rebecca has appeared on the ABC show 'War on Waste' to increase awareness of the plastics issue and the solutions available. She has published a book on the Plastic Free movement, and created a vast social media following - inspiring countless others to do more for the planet.

The story Local heroes stepping up to answer the call of their communities first appeared on Farm Online.