ON FARM: Lisa Roche with some of the family's Angus breeders at Pemberton.

The family runs about 250 Angus breeders in conjunction with an avocado orchard.

The Roche family farm is owned by Ms Roche's parents Dennis and Dot Roche and is nestled among the beautiful green scenes of the Pemberton region.

In addition to the home farm at Eastbrook, the Roches also have another land holding east of Manjimup and a few other smaller properties as well as some leased land to run their cattle across.

Across the properties, the family run about 250 Angus breeders in conjunction with an avocado orchard and Ms Roche said the two enterprises kept them busy year-round.

THE family has been growing avocados for more than 25 years and they are picked from October to January.

They also have a freight business, which is well utilised.

They are kept busy carting the fruit refrigerated to Perth daily from the local packshed to be then placed on rail to the east coast to be sold.

Ms Roche said the growers in the area were looking forward to a good season with good volumes, which was positive for the industry.

"Due to COVID-19 it may be difficult to get workers again to pick the fruit this year but we are staying positive" Ms Roche said.

When it comes to making changes or improvements to either of their operations the Roches are always reviewing their programs and strive to keep up with the ever-changing industries.

"We are re-assessing things all the time to ensure that we are running our operation as best we can," Ms Roche said.

"It is easy to think that what you are doing is spot-on but there's always something that could be improved upon and learnt from by other industry leaders and experts in their field."

THE family's cattle herd is made up predominantly of Angus females and they like running the breed for many reasons.

Ms Roche said the breed had a quiet temperament and were good to handle.

"Angus are also popular in the market and they are earning good returns for their efforts," Ms Roche said.

"It is a popular breed and it's what people seem to be chasing.

"We really like all the facets of the Angus and they seem to suit the area well."

Joining time for the Roches is on April 25 (Anzac Day) with calving occurring nine months later over a three-month period.

At some of the other properties the Roches join their breeders slightly later so they are not all calving at the one time. 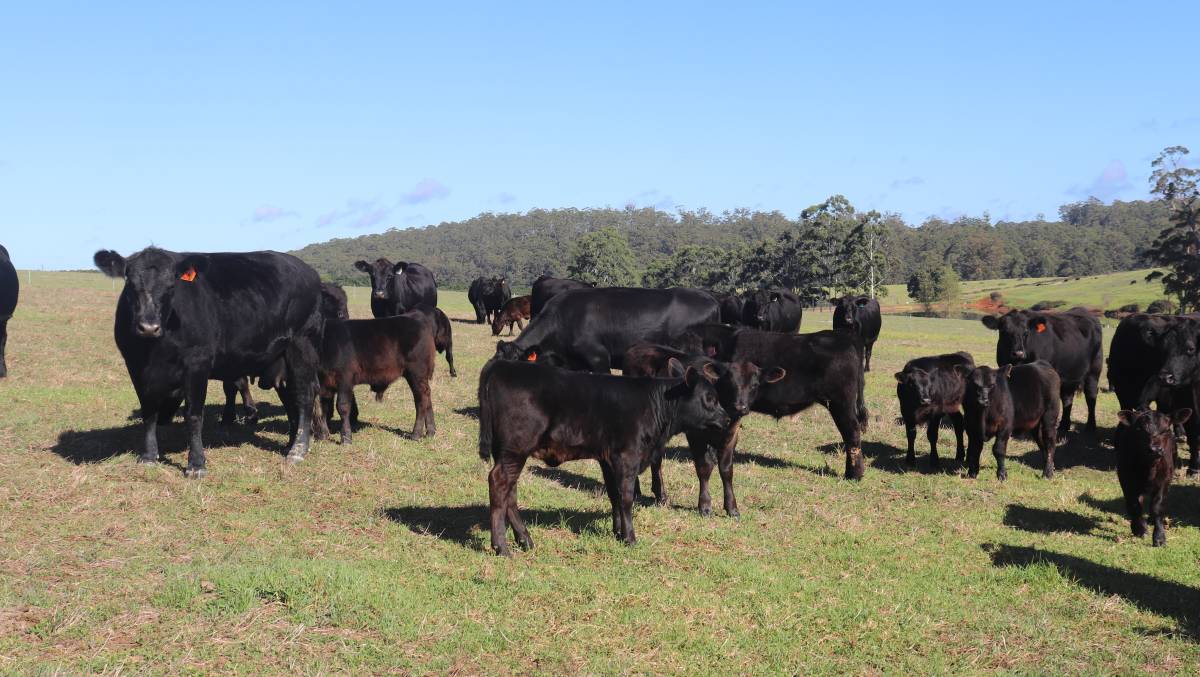 DROP: Calving is staggered, beginning in February to April at the Pemberton farm and from March to May at the other properties.

When it comes to sourcing their bulls, various Angus studs are utilised and a lot of research is done to determine the right bulls for their use.

When selecting their new bulls, qualities such as temperament and conformation are important considerations, as well as their estimated breeding values (EBVs) for growth including 200, 400 and 600-day weights.

"We do review the EBVs and figures solidly," Ms Roche.

"But we also place a very strong emphasis on a visual assessment when choosing sires as they go hand-in-hand.

"It is important for us to get the right genetics."

THE Roches retain a percentage of their heifers each year as replacements because they find that their own cattle have the characteristics they seek if they were to buy cattle in.

"We like what we are breeding so there is no point selling all of them," Ms Roche said.

"We also believe our own weaning and handling is a major focus so they have a good start and integrate perfectly into our program."

Each year the Roches review their herd and cull according to their breeding criteria.

"We cull mostly for the obvious things, such as empty cows, bad temperament, conformation issues or faults and cows that may have had issues at calving," Ms Roche said.

In terms of marketing their cattle, they sell most of them through the saleyards but some are also sold direct to live export or feedlots.

A large percentage of the steers are sold direct to slaughter.

The weights that the cattle are sold at varies according to the market they are trying to sell into.

"We do look at other sale avenues hence we are open to other markets," Ms Roche said.

She said the strong cattle market had been positive for their enterprise and has allowed all producers to prosper.

"It is nice to be rewarded for your work," Ms Roche said.

"It benefits everyone when any industry is going strong."

When it comes to feeding their cattle, they buy in all their hay which is all quality tested and is outsourced from various producers from as far as Williams.

"We want to ensure the cattle are getting the best quality feed," Ms Roche said.

The Roches opt to buy in the hay so they are not locking up their paddocks which they can run a few more head of cattle on.

"We figure that we can probably buy in better quality hay than we can grow ourselves," Ms Roche said.

"Hay cutting season also clashes with avocado picking season and with the high rainfall there is a risk of the hay getting wet once it has been cut."

To ensure maximum productivity is being achieved within their herd, all of the females are pregnancy tested.

The story Angus with a side of avocado in WA first appeared on Farm Weekly.