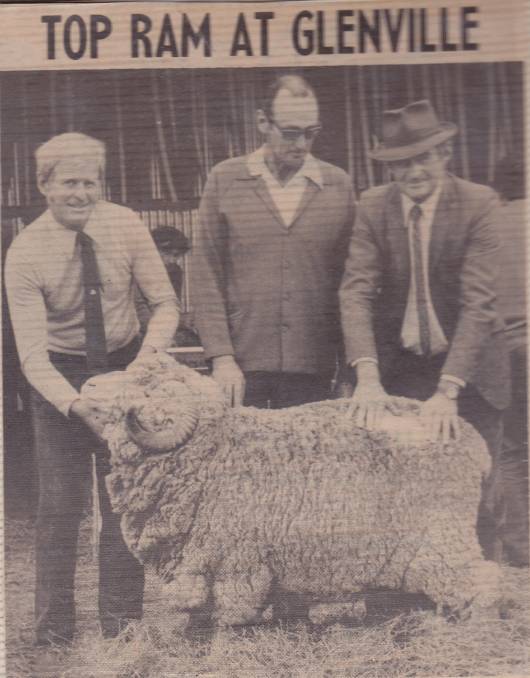 EARLY DAYS: One of the first Glenville on-property sales in 1975 with Barry Smith, left, AR Haywood, who was the buyer of the top-priced ram at record price of $410, and Mervyn Smith. Glenville, based at Cowell on the Eyre Peninsula in South Australia, is marking a major milestone in conducting one of Australia's longest-running Merino and Poll Merino on-property ram sales.

This year will be the stud's 60th auction, which will be held on August 3 with 220 rams to go under the hammer.

Spanning five generations of the Smith family, Glenville has evolved and expanded since its establishment in 1938 and first auction offering of 27 rams in 1962.

Poll Merinos were introduced by founder Merv Smith's son Barry in 1978, and there has been a transition to Poll genetics in the past 30 years as demand for these has increased.

The stud continues to focus on its core breeding objectives of producing well-nourished, long-stapled, bright and deeply crimped wool on a plain-bodied sheep that also has a top quality, high-returning carcase. This makes the modern Glenville Poll a low maintenance, yet high-performing option for wool production and terminal sire sheep systems.

Performance recording is key to the Smith's breeding operation and dates back to the early 1940s when Merv Smith sent wool samples to the Institute of Technology in Geelong, Victoria, to assess micron and other traits.

This made him a pioneer in the use of fibre diameter testing.

Initially he did this out of curiosity, as he was wondering why one wool felt softer than others.

He then started to use the results to produce wool with the added confidence of predicting an even fibre diameter in his woolclip, and uniform lines.

His grandson Daryl, now the Glenville stud principal, said this was driven by his grandfather's desire to continually improve the genetics underpinning the quality and amount of wool grown by the stud and its clients - rather than for a marketing edge.

He said the stud's aim was to produce wool with an average length of 110-120 millimetres for 12 months growth in adult sheep.

This enabled commercial producers to shear twice a year if it fit their program.

The stud's average adult flock wool fibre diameter is 19 micron and cuts per head are about eight kilograms. PROVEN PERFORMANCE: The stud's 2020 equal top-priced ram sold to Alma Stud NSW for $9000 with buyers Will, left, and Graham Morphett, and Klay and Daryl Smith.

Mr Smith said ewe fertility was a major focus, as more lambs on the ground was a key profit-driver for growers.

He said all stud ewes and lambs were mothered-up to provide predictability and performance in breeding, a practice the stud had been undertaking for more than 60 years.

"Our overall objective is to provide growers with a true dual-purpose sheep that suits all types of production systems," Mr Smith said.

"Clients are seeking early-maturing sheep that have high wool cuts and good early growth which enables lambs to be turned-off fast at high weights."

The Smiths use a range of available technologies, including micron testing, fleece weight, growth rate, bodyweight and eye muscle scanning.

Last year's ram team had an average eye muscle scan of 41.5 and average body weight of 100kg at 12-months-old.

Initially, Glenville showed sheep regularly and won many ribbons - including South Australian ram of the year in 2002.

Since then, the focus has been on paddock-run rams.

"Thus gives our clients confidence that the rams will adapt and perform well in all conditions," Mr Smith said. In recognition of its success, Glenville genetics are sold across SA and into Western Australia, Victoria, NSW and Queensland.

In the 220-head line-up at the stud's 60th on-property ram sale there will be genetics from high performing Glenville rams and Glenlea Park 173, which sold for $100,000 at the 2019 Adelaide Ram Sale.

Mr Smith said continual genetic improvement in key production traits was the future direction for the stud, which he now runs with his wife Carla and son Klay. His father Barry is also still an active participant.

"We appreciate continued support from clients old and new, and are looking forward to celebrating 60 years of on-property auctions with them later this year," he said.

The story Shining a light on diamond event at Glenville first appeared on Farm Online.