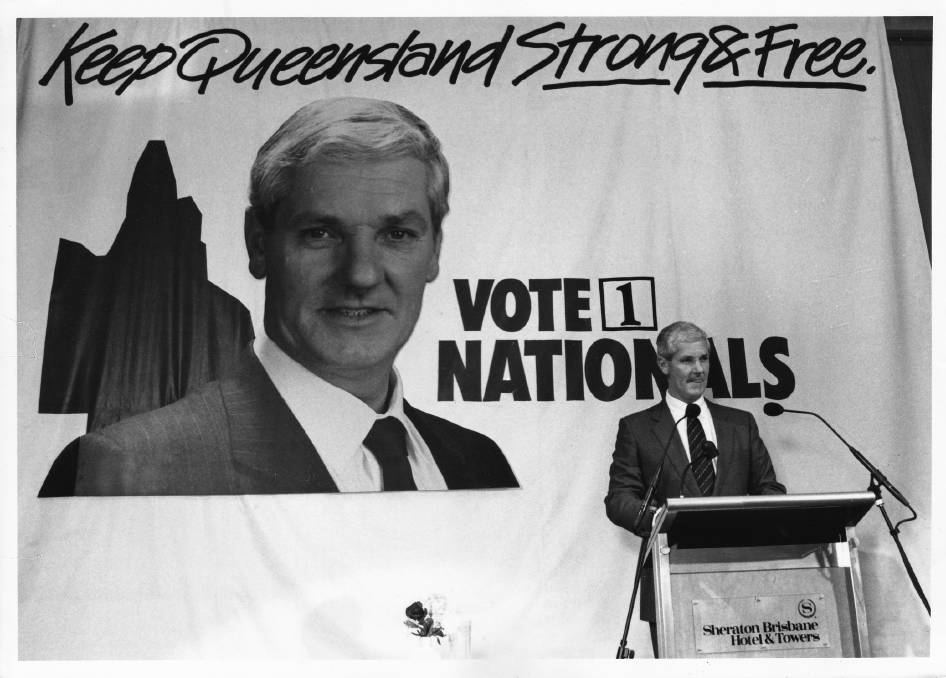 CAMPAIGN LAUNCH: Russell Cooper launches the Nationals' campaign for the 1989 elections which his party lost in a landslide.

Former Queensland Premier Russell Cooper has had his nose rubbed in "it" many times during his life starting as a young child.

As a bed-wetting three-year-old he vividly recalls having his nose rubbed into one of his urine-stained sheets and then being dumped on top of them in a bathtub by a nursemaid and told to get washing.

Rather than sook and cry he says he obeyed the nursemaid's orders and started scrubbing for all his worth.

Mr Cooper has just written a brutally honest memoir which, not surprisingly, focuses heavily on his long political career including his 73 days as a "reluctant" Queensland Premier in 1989.

In less than 200 pages "Coop, The Reluctant Premier" takes the reader on a lively journey starting with Mr Cooper's happy but tough childhood in the 1940s on Tarwoona, a 4000-hectare family farm on the NSW-Queensland border near Texas, which clearly shaped his values and attitude to life.

He had a difficult relationship with his father, Theo Beverley Cooper, a cold and hard taskmaster, who once called him "lazy". 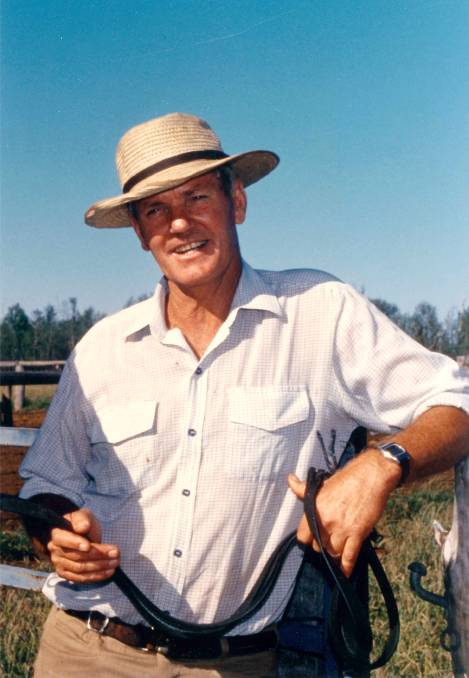 HOME AT DONNABAR: Russell Cooper pictured on the family farm Donnabar near Wallumbilla but he says the original family farm Tarwoona near Texas was always his spiritual home.

Mr Cooper reacted by turning himself into a workaholic which came in handy when, at the age of 22, he was sent to manage Donnabar at Wallumbilla near Roma two years after his family bought the 4621ha property in 1961.

He also remembers when he was about seven his father gave him an orphaned Hereford calf which he lovingly reared and called Jumbo.

One day, to his everlasting horror, after Jumbo had grown into a big, fat young bullock his father slaughtered him for beef.

"Shocked to the core, I walked home and said to my mother (Muriel), 'They've killed Jumbo'. Her reply was, 'Never mind, Russ. We'll get you another one'."

Those experiences no doubt helped Mr Cooper, now 80, survive in the rough and tumble of Queensland politics for almost two decades.

What emerges from the book is a picture of a hard-working, conservative rural Queenslander who manages to rise above grubby politics to achieve his state's top political post, albeit relatively briefly. 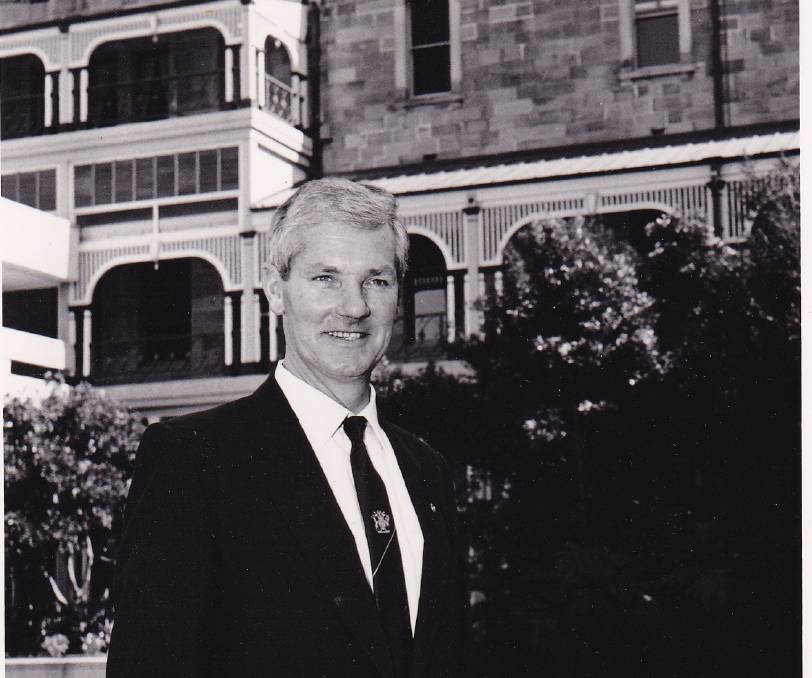 READY TO MAKE A DIFFERENCE: The new member for Roma arrives in Brisbane full of enthusiasm to start his political career in 1983. He left exhausted in 2001 after 18 years in politics.

Mr Cooper doesn't sugar-coat his own failings, using the book to apologise to his wife, Penny, the rest of his family, friends and colleagues for not getting professional help earlier for his bouts of bad temper, moodiness, depression and undue haste to reject those he disagreed with.

"I admit to having a short fuse; it's in the family. My father made no attempt to curb his temper and I knew nothing else for a long time."

Mr Cooper entered state politics as the member for Roma in November, 1983, and departed in February, 2001, a decision which coincided with the abolition of the Crows Nest electorate which he had held since 1989.

Sandwiched between those two political milestones 18 years apart is a rollicking tale of success, failure, chicanery, dirty tricks and bitter fights to clear his name.

Mr Cooper claims one fellow NP member from north Queensland even spread a story that he had invited prostitutes into his bedroom in the Queensland Parliamentary Annexe building to thwart his chances of being elevated to the ministry by then Premier Joh Bjelke-Petersen.

The "prostitutes" turned out to be the Coopers' then 14- and 12-year-old daughters who regularly visited him in his Brisbane parliamentary living quarters and had looked after the very young son of Mr Cooper's accuser. 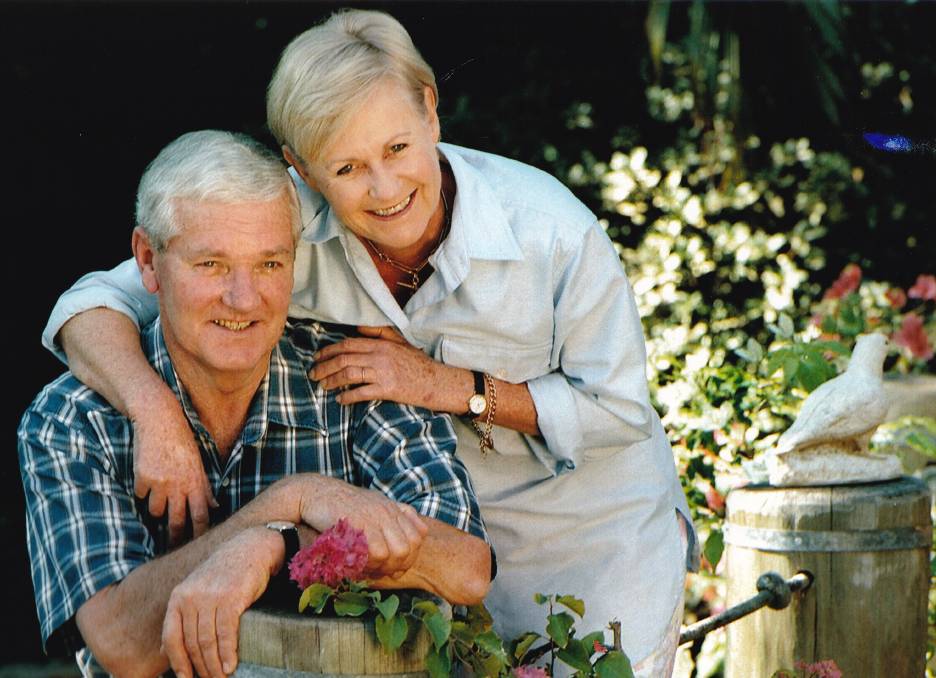 FORMIDABLE TEAM: Russell Cooper says he is grateful for the support given to him by his wife Penny during his challenging political career.

It didn't matter because the once-impregnable Joh Bjelke-Petersen's long political career imploded soon afterwards as a consequence of his failed "Joh for PM" campaign in 1987 and the establishment of the Fitzgerald inquiry into police corruption.

He immediately got cracking on much-needed prison reform including Brisbane's notorious Boggo Road Gaol but was moved to the Police, Emergency Services and Administrative Services portfolio in a ministerial reshuffle in January, 1989.

His relations soured with the widely unpopular Mr Ahern over his point-blank refusal to honour a commitment to provide more money for the police force and he ousted him as Premier in September, 1989, with an election only months away and the National Party facing certain defeat.

The National Party lost office along with 22 seats after 32 years of ruling the roost in Queensland but Mr Cooper stayed on as Opposition leader, handing over the reins to Rob Borbidge after two years.

In his book Mr Cooper rejects conjecture at the time he had resigned after being named and shamed on the front page of the Courier-Mail for allegedly rorting his travel allowance on a holiday to Hamilton Island in 1986.

He had paid for the holiday with a personal cheque but the money was refunded by the parliamentary travel service who told him the trip was a legitimate expense.

An investigation by the Criminal Justice Commission (CJC) cleared him of any wrongdoing but not before the media had had a field day. 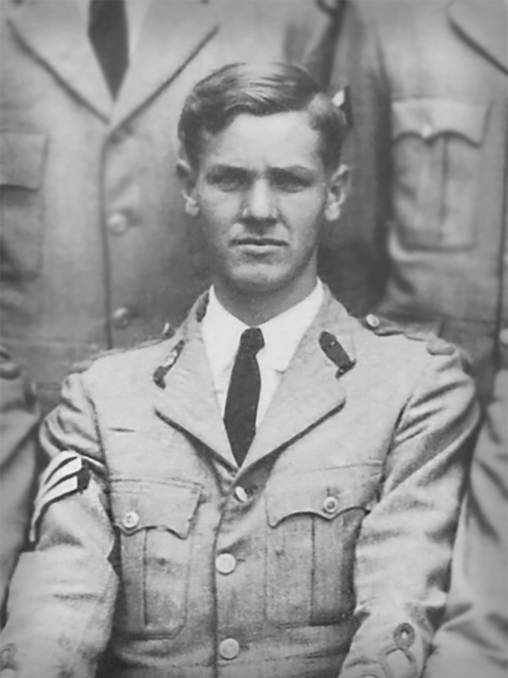 KING'S BOY: Russell Cooper when he was a senior student at Sydney's The King's School in 1958. He had earlier boarded at Toowoomba Prep. He later went jackarooing in NSW at Deniliquin and Gulgong which he described as his happiest experiences as a single man.

Mr Borbidge became Premier early in 1996 after the Goss Labor Government lost a crucial by-election and Mr Cooper returned as Police Minister just in time to get caught up in John Howard's push for tough new national gun control laws in response to the Port Arthur massacre.

The Prime Minister received unwavering support from Mr Cooper despite death threats and a severe backlash in the bush against the Queensland National Party.

The unpopularity of its support for law reforms cost the Borbidge Government office in 1998, sent party members flocking to Pauline Hanson's One Nation party and was the death knell for Mr Cooper's political career.

But he has no regrets and said he did what was right.

Mr Cooper said politics gave him the opportunity to achieve something of value which he took "with both hands".

"All we (his staff and public servants) wanted to do was to achieve something that really needed doing, such as prison reform and gun laws," he said.

"I have no regrets about what I've written," Mr Cooper said.

"I really like people, anyone, I didn't care who it was or how they voted.

"I am so glad I did it, my father was the only person who tried to stop me (going into politics).

"Politics is people, if you don't like people, then get out of it."

Mr Cooper and Penny have lived in Buderim on the Sunshine Coast for the past 20 years and he spent 10 years painstakingly compiling his memoir.

He said while he couldn't claim to have been a good father to their four children, Erica, Amanda, Katy and "Warwick", he had been a doting and loving parent unlike his own father.

The story Russell Cooper, the 'reluctant' Premier, not reluctant to tell his story first appeared on Farm Online.