ON FARM: The Farmer Wants a Wife farmers with host Natalie Gruzlewski, on a farm... run by farmers. Photo: Seven

FWFWW 2: The guys stand around the pig and discuss who they pashed.

WELL, we're into the second week of Farmer Wants A Wife and there is one thing that is very obvious - Farmer Sam is still wearing a woman's hat.

After sending some ladies on the trail, the farmers are spending time getting to know the rest.

At Farmer Andrew's farm, it is time for shearing. After the two shearers gaped at the ladies for five awkward minutes as they swanned into the shed, we got to meet Chops, Andrew's dad.

From Chops, we learned some pretty handy info:

Up the mountain at Farmer Rob's, it was time for the big calf marking. So they marked five calves. It was a long, sweaty day of work.

It was at this time Meg, the chick with the awesome red, curly hair, said that Farmer Rob was 'the frog's clogs'.

I will now be using the phrase 'the frog's clogs' in everyday conversations.

I reckon Meg and Rob should end up together - they can send bales of their combined hair and beard off to the wool sales and make a fortune.

We also learned Farmer Will knows the perfect spot to woo a lady - Nyngan. Yep. They went and took photos at the Big Bogan and then went fishing. This is romantic stuff.

Farmer Matt got the memo it might be time to do some cattle work, so they were backlining some steers.

Farmer Matt apparently at this time was employed by a drench company to outline its benefits.

The confusion still continues over at Farmer Sam's place. Why are the sheep covered in pink? Is it brand? Is it raddle? Why are some nearly completely pink and others aren't at all? And why everytime they have done sheep work this season do they just keep getting this one mob of sheep in?

Anyway, back to the worst demonstration of feeding out hay ever.

Sam has pulled out some hay that was baled in 1996 and showed all the girls how not to feed out hay.

One of the girls commented it looked like this was his first time feeding hay. They might have hit the nail on the head.

Anyway, after Rachel had finished proposing to her dress, everyone headed to the Snowy Mountains to Farmer Rob's.

There was movement at the station, for the word had passed around, that Farmer Rob had a huge pig on a spit.

He proudly tells the girls the baste he uses would 'put a horn on a jellyfish'. I don't think anyone wants to see that.

The guys stand around the pig and discuss who they pashed during the week. The girls get together and talk about feelings.

Farmer Andrew's ladies tell him they give him permission to snog them and they won't talk about it. He gets cranky about the pash pact and goes and chucks a little kissy hissy fit outside. 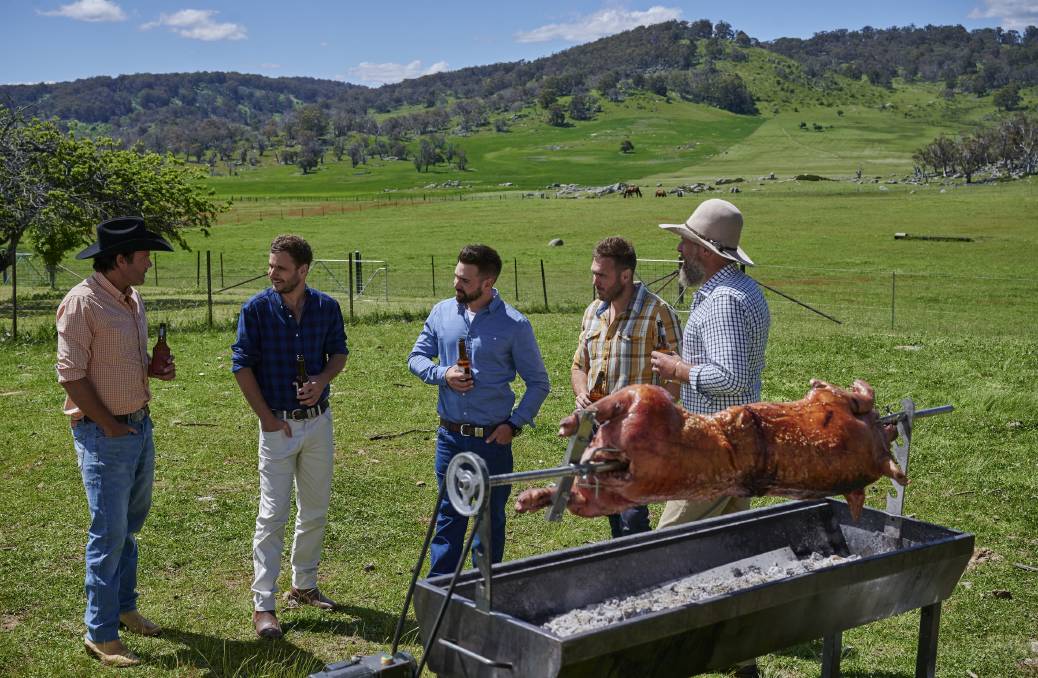 YARNING: The lads all get together around a spit roast to talk about pork and pashing. Photo: Seven

Farmer Will and Jessica also share a liking for pretty snazzy boots. Now that is love.

The night is rife with perfectly cooked pork and jealousy, and Plumber Brydie telling us a startling fact about her anatomy.

At the end of the night, the lads get to choose one lady to whisk off for some special time.

The drama is like watching that scene on 'Australia' when they are trying to stop the stampeding cattle from running off that cliff - it's life and death.

Farm Lesson of the Day: If you chase sheep with a drone, they will run.