The next generation has big plans for Thalabah Merino stud. They say history never repeats itself, but the next generation at Thalabah Merino stud is hoping it does.

Stud principal John Williams was around the same age as his daughter Kristen Frost when he set about a mission to win the coveted Stonehaven Cup - the best group of five Merino sheep at the then biggest sheep show in the country - the Sydney Sheep Show.

In those days John was principal of Koonwarra Merino stud where he ended up making some history-making feats.

Mr Williams ended up winning the iconic cup 10 times in 23 years with his Koonwarra stud before it was sold in 1998, with his first wins including a hat-trick at the Sydney Sheep Show and then the Sydney Royal.

Fast forward to 2021 and although upcoming stud principals Anthony and Kristen Frost know the Merino industry has changed and showing is only one facet of the industry, they are keen to keep the tradition alive and maybe let history repeat itself.

This year Thalabah won the cup, albeit without Mr Williams there due to ill health, and although this year wasn't the first time the stud has won under the Thalabah name, the win came when they needed it the most.

It was a time when the young family needed some validation as they were attempting to fill some very big shoes.

"When we look back at what dad has achieved, our initial feeling is pride," Ms Frost said.

"But then all these other thoughts and feelings come, and they are quite frightening. It was something I wasn't expecting.

"Thoughts of letting him down, not being good enough or even thinking we may be breeding too far away from his preferred type all goes through our heads."

Anthony and I have plans, and we are already heavily implementing them, but the influence on the stud from my father is massive. - Kristen Frost, Thalabah Merinos

Ms Frost describes her dad as a game changer, especially in his prime, who was always thinking outside of the box when it came to genetics.

"He took big gambles in the stud industry, and I love that about him, '' she said.

"Someone suggested to me recently to try genetics from a ram that was breeding well at another stud.

"I honestly thought, 'why would we do that'?

"I don't want to do what other people are doing ... I want to make my own path - even if I fail, I'll find that out myself."

This year's winning team included four embryo transfers by Langdene 15-0044 and they were out of two different ewes, including a previous Great Southern Supreme Merino grand champion.

The winning team of five had fine-medium wool and four were two-tooth sheep.

Another highlight of this year's show was Thalabah's two-tooth ewe, which was judged junior champion and reserve grand champion fine wool.

"Our junior champion ewe was along the lines that we will continue to breed at Thalabah," Ms Frost said.

"Working together with my husband, my dad, my brother Jim, long-time employee Brad Cartwright and our classer Rick Power is something that I don't take for granted.

"Anthony and I have plans, and we are already heavily implementing them, but the influence on the stud from my father is massive.

"I think we are all using our individual strengths to their fullest advantage."

He was joined to both Thalabah's horned and existing poll ewes.

"The purchase of a double polled gene ram was imperative to us as we are taking all steps to accelerate the Poll Merino genetics at Thalabah," Ms Frost said. 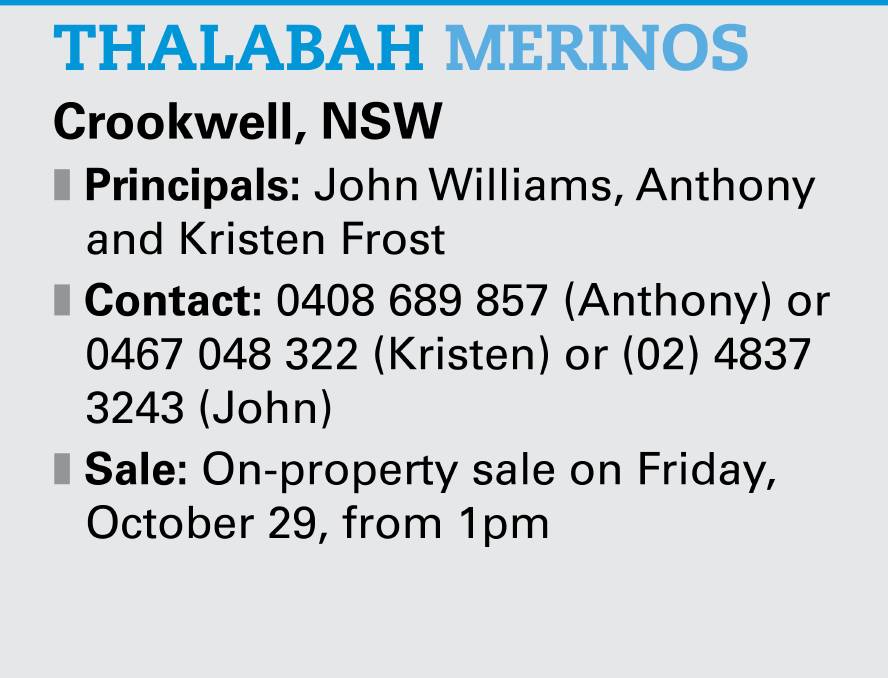 This year's draft of sale rams will include AI progeny from the 2019 Victorian Hogget of the year from Glendonald stud, one of the winning Stonehaven Cup team rams, Thalabah Sarg 09, and Alfoxton Poll.

Thalabah will be displaying a small selection of rams at both Mudgee National Merino Show and Sale and South West Slopes Field Day.

The story Big plans under way at Thalabah stud first appeared on The Land.