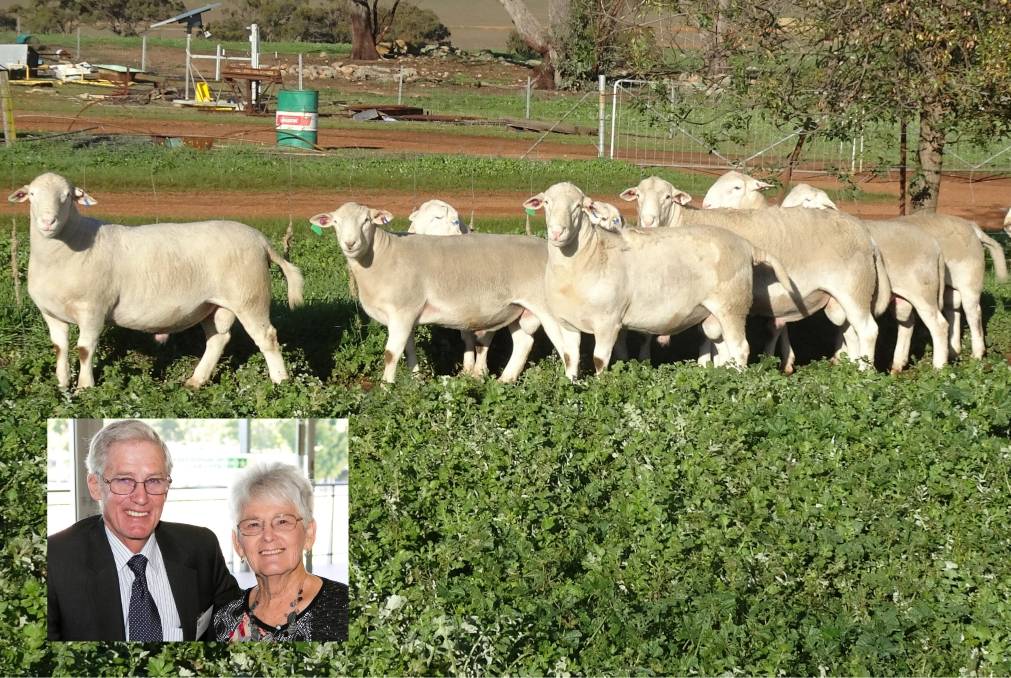 NO FUSS: UltraWhites are an easy care, meaty shedding sheep, with great structure and fertility. Inset: Dawson and Greta Bradford.

Dawson Bradford has achieved a great deal in his life.

He has run a large cropping and sheep property, plus a piggery, for decades, he has beaten cancer, and he was the WAMMCO International chairman for 15 years.

But despite being very humble, one achievement he's particularly proud of his UltraWhites, a new breed of shedding sheep which is making a big name for itself. And he isn't done yet.

Mr Bradford and his wife Greta, along with son Dawson and his wife Lisa, Hillcroft Farms, Lol Gray, WA, run between 1500 and 1800 UltraWhite stud ewes, of which 1000 to 1200 are mature ewes and the rest are ewe lambs. He also runs 8500 purebred UltraWhite ewes in his commercial flock.

With all this to keep him busy, he didn't want the fuss of wool, so he had spent close to two decades developing the UltraWhite breed - a shedding breed bred from Poll Dorsets and Dorpers.

UltraWhites have the hardiness of Dorpers, with strong fertility and structure, and are an easy care, meaty sheep.

Mr Bradford developed the UltraWhite because he couldn't find another breed which had what he was looking for - growth, strong structure and maternal ability, marbling and of course shedding its fleece.

He has worked hard to stabilise the features of the parent breeds that he wanted. "Temperament is important. The temperament of the first cross was terrible," he said. "It took us four generations to get rid of it."

He said they culled on performance, which helped the temperament issues. "They've become very quiet now with improved performance and are also very easy to contain," he said.

"It's so important for the breed to have stability and purity. We want them to throw the same genetics within a commercial mob. What you see is what you get. I believe it is pretty stable now."

Mr Bradford breeds his own rams for use in the stud. And he has a unique way of doing this - he only uses his stud rams for one season. The rams are six months old when they are first joined for one season only before they are sold to clients. "We don't have any rams over 18 months of age on the property," he said. "The reason is that you get faster genetic gain using only ram lambs, and also it makes inbreeding easier to manage. If a ram hasn't produced a son better than himself, we don't want him. If he produces one better than he is, we still don't want him, as his son will sire superior genetics."

The focus on growth and meat is paying off - the progeny of the UltraWhite commercial flock are sold, with males sold straight to WAMMCO International abattoirs at 16 to 20 weeks, with a dressed weight of 24 to 26 kilograms. Surplus ewes are sold to commercial producers.

Mr Bradford knows his stuff when it comes to the lamb industry - he was on the WAMMCO International board for 20 years, with 15 years as chairman.

"I've got a pretty sound knowledge of what the processor and customer want, and what makes the cash register tick over," he said.

The breed is gaining popularity, with the Hillcroft Farms sale last year, in October, averaging more than $3000 for its rams.

"It is a sign of approval from the commercial world, which is very important," he said.

The UltraWhites will also compete at this year's Australian Sheep and Wool Show for the first time where they will further face public scrutiny.

Mr Bradford said UltraWhites had many benefits for commercial producers. They are easy care sheep and ideal to cross over other breeds, because of their excellent ASBVs, including low birth weights, which makes them ideal to put over maiden ewes.

He also has commercial clients selling the UltraWhites direct to butchers. The clients are getting glowing feedback for eating quality from butchers and their customers.

But there are a few attributes Mr Bradford is looking to improve. The first is fertility. He said because UltraWhites don't produce a fleece, they need to produce twins a majority of the time.

"Right now they produce 120 to 140pc lambs at marking each time, which is OK by industry standards, but I would like to get them to 170pc each lambing," he said.

To help address this issue, he has introduced the GDF9 gene, also known as the Norwegian Gene, to a small nucleus flock within the stud, which when released will give dramatically increased results near or better the desired 170pc.

His next focus is worm tolerance. The UltraWhites have good tolerance to worms, but he is keen to do better. Mr Bradford said he always selected for good growth, which was always a useful indicator of the degree of worm tolerance.

Eating quality is another focus for Mr Bradford, and he believes the UltraWhite meat has a lower melting point than most sheep breeds.

"What a lower melting point means is that the fat stays liquid in much lower temperatures than normal. It doesn't stick to the roof of your mouth or set on the plate or in the frying pan," he said. "The meat is quite tender, light pink and almost odour-free."

Mr Bradford said Murdoch University in WA was conducting analysis of lamb carcase samples to ascertain the melting point and a full range of other eating qualities.

"This information will be extremely valuable for us to identify what we already have in the breed with eating quality, and to further enhance those qualities in the breed to make it one that truly has all of the industry's needs wrapped up in one package," he said.

The story A man with a meaty, wool-free plan first appeared on Farm Online.