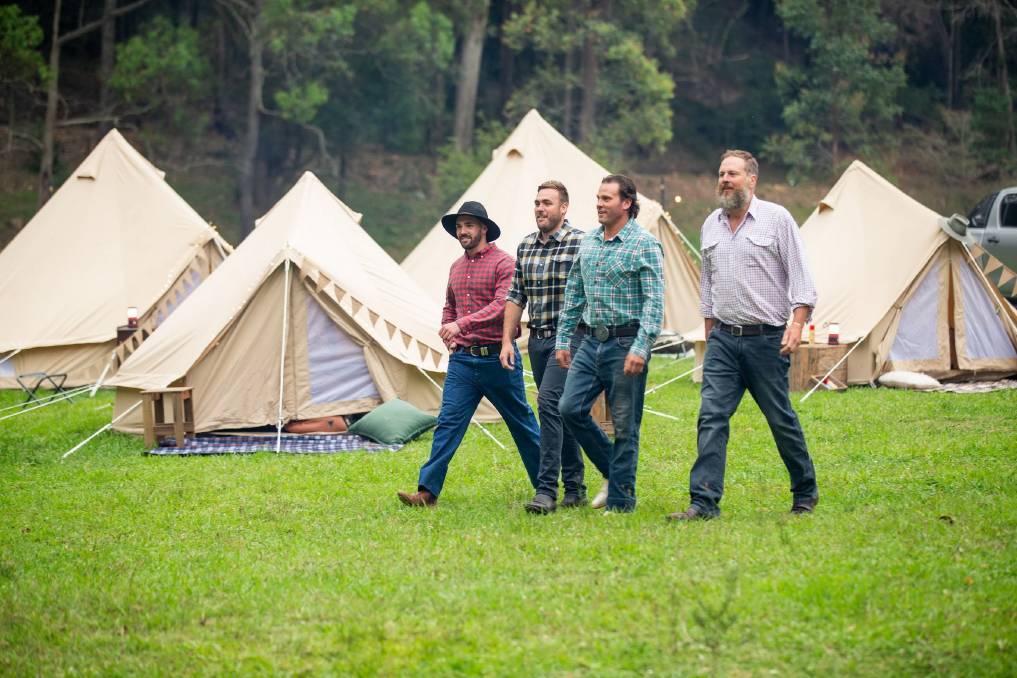 STRIDING: The farmers are dolled up for the camping experience with Farmer Sam drawing the short straw to wear a hat this time. Farmer Will must feel naked.

FWFWW 6: Ep 9: Returning Tara gets a frosty reception and Rob hits a six.

WELL, we're back for the final week of Farmer Wants A Wife folks, who can believe we're already here?

It seemed like just yesterday that we were watching the predominantly blonde beauties grace our screens for the first time, with their freshly-painted faces which surely would be stained with dirt quicker than you can say sale-o.

Wrong. Those faces have stayed pretty perfectly made-up most of the time.

To begin the episode, the strings are playing, there are drone shots of sheep and windmills, and a dramatic voiceover - grab the popcorn and sit back, with the threat of "a return" which should surprise absolutely no one, this is going to be a cracker of an episode.

It's clear very early on that whoever paid to teach the farmers how best to stare into the distance is getting bang for their buck - whether our rural bachelors are sitting on a tree stump, leaning on a fence, or walking round a shed, they well and truly have it sorted.

They are versatile with their staring ability and rival dating show producers were quite possibly taking notes of who to track down, in case this grand search for love was to not come to fruition for one or more of the farmers.

First up the girls are demonstrating their expertise at farm life. Surely nothing says "I suit this lifestyle" better than fake eyelashes, cropped shirts and purposely-ripped jeans?

My Dad has always made the comment that paying for ripped jeans is absolutely ludicrous, and while that at times made him sound beyond his years, he certainly has a point.

A little while ago I climbed through a barbed-wire fence with a puffer jacket on, snagged it and fluff went everywhere, prompting the farmer I was visiting to start calling me Santa Claus.

That incident shows the puffer perhaps wasn't the most practical choice despite the cold that day, but I do think I have a better leg to stand on than anyone who opts for ripped jeans for farm work.

Farmer Matt is driving round in a tractor with Hayley riding as shotgun, with his remaining "contestants" trying to play it cool while really thinking 'why is there is only one passenger seat and I am not in it - this is not fair".

Farmer Andrew is instructing his ladies to pick a Border Leicester stud ram from the flock, explaining that they needed to pick a Romeo.

I tell you what, if I don't hear anyone say Romeo in this coming ram sale season, I will be mighty disappointed.

And who needs to talk about eye muscle or staple length when you could instead just talk about which rams are tall or handsome?

Andrew likes to spruke that having a small town vibe is an attractive trait, and while I can't fault him there, I think he was perhaps a little too spontaneous when he uttered "spontaneousness".

While the journalist in me cringed, I did remind myself that if I had a camera pointed at my face while trying to sort through sheep, I wouldn't be at my best. 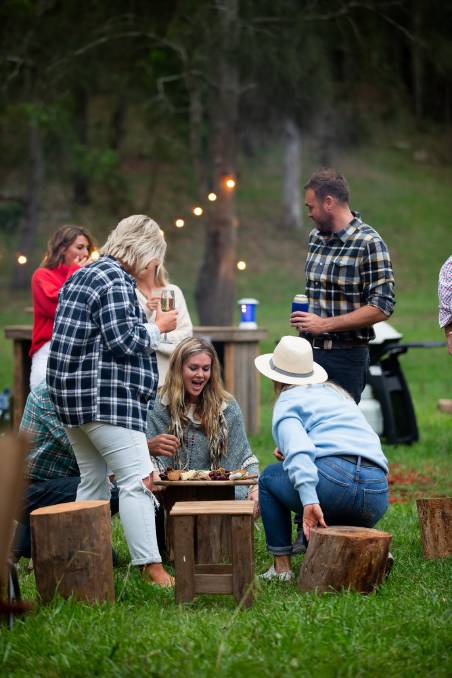 CHATTER: Some the girls enjoy a natter about a matter over a platter.

Farmer Will and his ladies are in the middle of a game of polocrosse, and to be honest, that is all I have to say about that. I missed most of it - my friends and I got engrossed in a conversation about the pros and cons of polocrosse vs polo. Did someone win? Did anyone score? Readers, I trust you were watching more closely than me at this point.

Not long after this we cut to one of Sam's girls, Mackenzie, saying she would be so happy if it was her chosen at the end.

She's doing the washing as this comment is made - I don't know if that necessarily helps her case, but the cowboy boots she's wearing at the time quite possibly do.

Farmer Rob is on horseback, as is Vici, and nothing says desperate like following along behind in a vehicle. Spoiler - that happened.

Young Again by Morgan Evans plays as we cut away from Farmer Rob, 40. Coincidence?

Jessica is unable to help with the tent set up, because - and I cannot even articulate how much laughter happened in my friend's living room when this was uttered - Jessica broke her wrist while late night gardening. 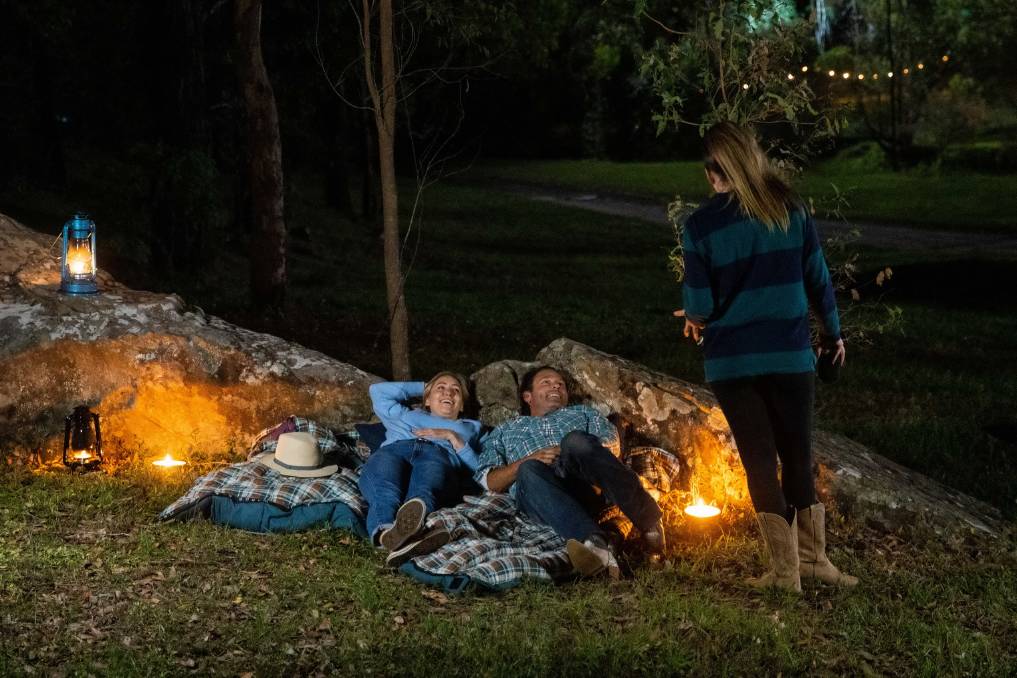 CROOK NECK: Jaimee and Farmer Will share a comfy, and nicely lit, rock for a pillow. Makes sense.

We did feel sorry for Jessica, broken bones aren't fun, but the fact that it was broken... by gardening... late at night... not even in her own garden... I'm sorry but it's just funny.

The tent setup goes relatively smoothly, people are banging tent pegs in using other tent pegs, you know, all the normal camping things.

It's a real "yeah the boys" moment. Sure, the guys are probably happy to have all the ladies' attention on them (and the Sakatas), but I think most of all, the gents were just stoked that Rob hit a six.

Too many wholesome vibes had been floating around for too long, and for a minute I think that the producers may have forgotten that reality TV is, or is at least supposed to be, drama central.

Just as everyone in my friend's living room voiced this opinion, loudly and emphatically even though every single other person agreed, Nat Gruzlewski walks in, and as lovely as she is, we doubt she is here with good news.

She joins the farmers round the campfire, likely disrupting cricket chat about That Time Rob Hit A Six, and Farmer Matt is in the firing line.

"Was it hard to say goodbye to Tara?" she asks Matt, and we all know what that means. Tara is back.

The "return" is fast becoming the bread and butter of reality TV, to the point my friends were debating if it's pre-arranged who is going to be chosen to leave and then come back almost immediately.

We named it the "cut-some-onions-then-we'll-put-a-camera-in-front-of-your-face-then-force-you-to-leave-but-don't-stress-you-won't-be-gone-for-long" setup. Ah, what an insightful bunch we are.

Alex is the token "I'm so annoyed" contestant. Maybe she thought this may happen when she signed up, but didn't think it would involve her farmer? Hayley and Brydie are also less than pleased.

We leave the girls seething for a minute and cut to Tara, staring wistfully into the distance in a red dress while a cover of Coldplay's Yellow is playing. I'm no expert, but I reckon that could have been organised better, somehow.

The bread and butter Return continues, topped with phrases such as a:

...with "vulnerable" uttered for good measure either one time, or ten thousand, or somewhere in between. 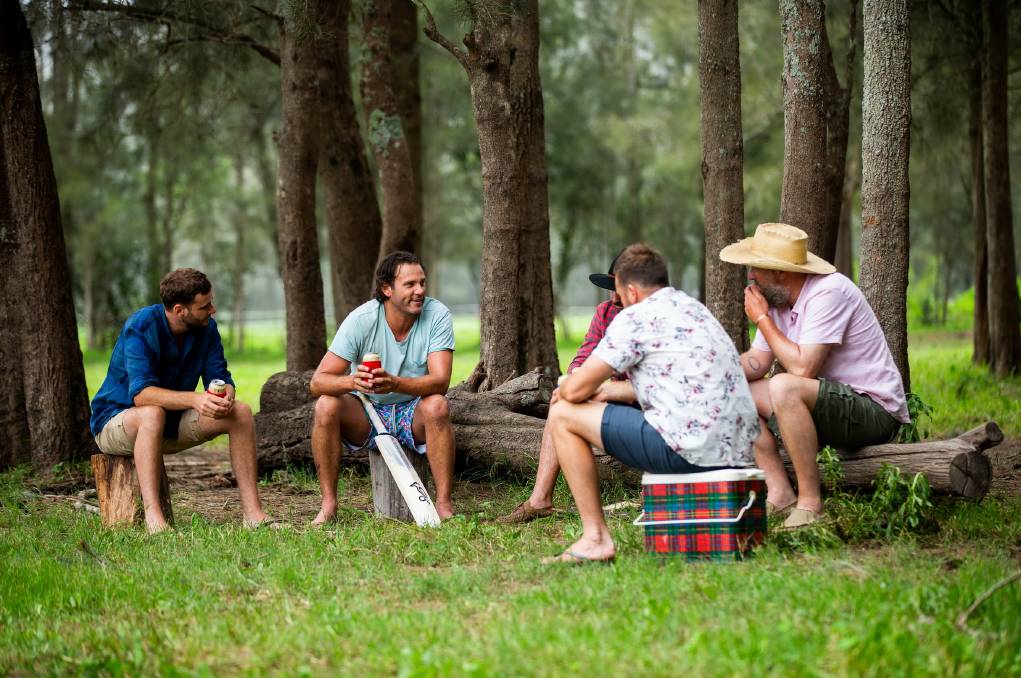 MARVELLOUS: Having just engaged in a blokey McBloke Bloke game of cricket, it's unlikely the farmers are discussing the miracle of Michael Bevan's last ball four off Roger Harper to take Australia to a victory in the 1995-96 series against the West Indies at the MCG.

But it seems the stepping on toes is no longer scary; she is back - muttering "I missed you" to Matt which apparently needs subtitles - the violin is playing again and the game is on.

Everyone is excited for the greeting between Hayley and Tara. Was it cold and curt? Damn straight it was.

I think "dismissive tap" is perhaps more accurate, "hug" might be stretching the true definition of hug a bit too far.

Alex doesn't think Tara is a good match for Matt, and reiterates that the show is not called Farmer Wants a Girlfriend. Alex, you're so right. Farmer Wants a Blonde Connection would be a far better name.

Alex and Hayley are on the tailgate, and as Matt approaches, Alex jumps off and walks off.

Moving away from the tailgate is the complete opposite of every country song ever, and I personally don't think it's too harsh to suggest an automatic disqualification right there, because of that, would have been justified.

We're back to subtitles as Hayley and Matt chat to the soundtrack of some intense piano.

Before we know it, Mackenzie literally says, "Sam I am" during a hammock chat with Sam, and I think Dr Seuss rolled in his grave when that wasn't followed by Green Eggs and Ham.

Oh, the places that could have gone.

Mackenzie gets a kiss, perhaps because she is in a rugby jumper which is legit camping gear, Chelsea sees this and is devo, and before we know it, she is off.

There is a one-arm hug involved, Chelsea gets into the car, as Sam waves goodbye. The wave is more like a straight arm movement from right to left - a dedication to Tinder's swipe left perhaps.

Will Chelsea be back? Look, we wouldn't rule it out. There are only three episodes to go, but when something like a Return is the foundation of the show, you can never rule it out.

The next morning, or if that isn't clear enough, "the morning after the night before" as it's described in the voiceover, the farmers are choosing one woman each for one-on-one dates.

Good choice Matt. If you chose Tara, you'd be shot enough daggers to kill all of Sam's flock of Romeos.

Farm Lesson of the Day: If you're going camping, take a mallett, or a hammer.. Tent pegs CANNOT bang in other tent pegs.

Sign up here to Good Fruit and Vegetables weekly newsletter for all the latest horticulture news each Thursday....