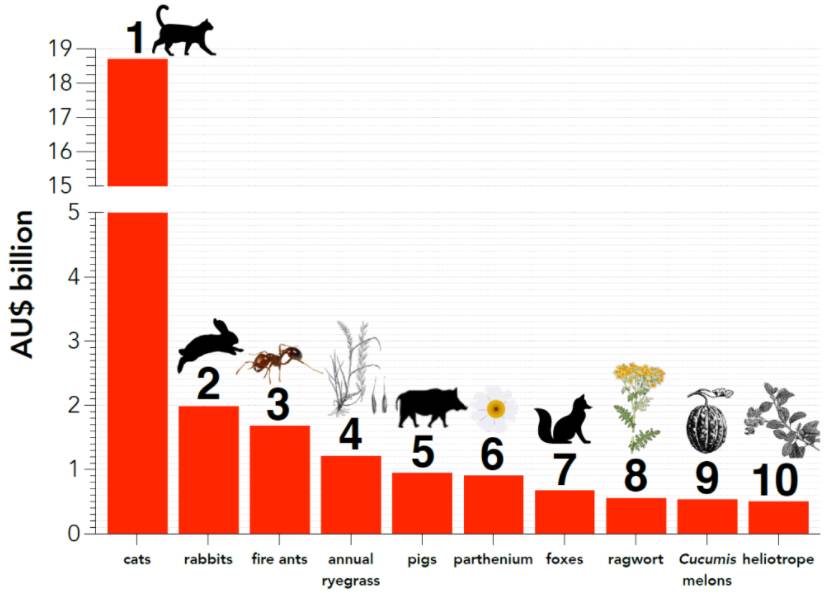 NAMED AND SHAMED: Top 10 most costly invasive species in Australia.

Invasive species have cost the Australian economy almost $400 billion and farmers will continue to suffer the consequences unless more money is invested into stopping their spread.

INVASIVE species have cost the Australian economy almost $400 billion and farmers will continue to suffer the consequences unless more money is invested into stopping their spread.

Led by Flinders University, researchers analysed data from a range of international studies and combined it with Australian datasets.

They found over the past 60 years, the total economic cost was $390 billion.

Feral cats were the single-most costly species, at around $18.5 billion, mostly due to the ecological damage they do to native birds and wildlife.

However, the combined costs of managing invasive plants was the worst of all at $200 billion, with ryegrass, parthenium and ragwort the costliest culprits.

Invasive mammals and insects were the next biggest burdens, costing the country US$48.63 billion and US$11.95 billion respectively, with cats, rabbits and red imported fire ants the three costliest species.

Flinders University Professor Corey Bradshaw said the costs have been growing exponentially, with the nation spending about $19 billion a year combating them.

"Prevention is better than a cure at least in terms of the costs," Prof Bradshaw said.

"So if we get on top of our biosecurity, our surveillance and our eradication approaches we'll save billions of dollars over the next few decades."

The total cost of an invasive species was determined by looking at things like crop or livestock damage, the combined cost of management including eradication and even human salaries.

"In a way, tackling invasive species is the low hanging fruit in terms of agriculture reaching its $100 billion goal by 2030," he said.

Recent studies have found biosecurity spending has a 30 to one return on investment.

Invasive Species Centre chief executive Andrew Cox said the nation's biosecurity controls had a tangible impact on farmers, who spend an average of $11,000 on pest control every year.

"If we can improve pest control across the ag sector, we can lower those on-farm costs," Mr Cox said

"A good example is if we can stop the spread of deer to more agricultural parts of the country, and stop the grazing impact they have, which lowers a farm's income."

The analysis also considered the estimated costs of five native species groups, as they are often deemed pest species due to their overabundance and tendency to damage crops, livestock, or farmland.

Together kangaroos, koalas and wombats only accounted for between 2.4 to 3 percent of the costs - with kangaroos alone almost completely responsible for those costs.