A national shooting industry body has called on all Australian industries, businesses and the general public to boycott foreign owned freight company TNT/FedEx. 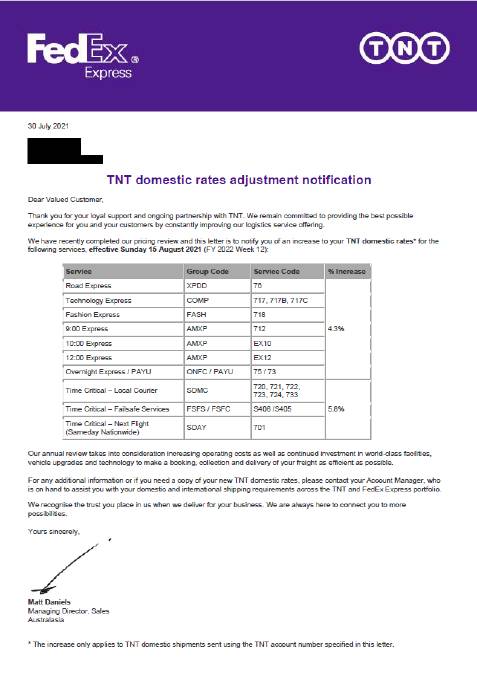 A redacted version of the letter sent out by TNT to a customer already adversely affected by the company's decision to stop transporting firearms to its customers in regional areas.

A national shooting industry body has called on all Australian industries, businesses and the general public to boycott foreign owned freight company TNT/FedEx in the wake of the latest kick in the teeth to rural firearm users.

Weeks after they announced they would soon be ceasing the transportation of firearms, weaponry and ammunition around the country and from overseas, TNT customers have received a letter advising of an increase in rates.

"Our entire industry has been de-platformed yet (TNT managing director, sales) Matt Daniels writes to them stating, 'Dear Valued Customer, Thank you for your loyal support and ongoing partnership with TNT. We remain committed to providing the best possible experience for you and your customers by constantly improving our logistics service offering'."

Mr Walsh said that for customers such as Brisbane firearms dealer Rob Nioa, who had been a customer for 35 years, it was "really hypocritical" and a price-gouging exercise that would hurt regional and rural Australia the most.

"FedEx/TNT seemingly have no corporate conscience as they have cancelled an entire Australian industry and then move with a hefty price increase," he added. "This is at a time when Australians are more reliant on freight services than ever due to COVID-19."

Mr Walsh said a message needed to be sent to the big American corporate that had achieved a dominant position in Australia's freight industry that this behaviour was unacceptable.

With the August 9 deadline for the end of TNT's transportation of firearms fast approaching, SIFA had been speaking with many different freight providers to try and find a solution.

"While talks are still ongoing, nothing is locked in," Mr Walsh said. "It's disappointing that in approaching other large freight providers, they have also knocked back assisting our industry even though they transport highly restricted goods like pharmaceuticals and narcotics."

Want daily news highlights delivered to your inbox? Sign up to the Queensland Country Life newsletter below.