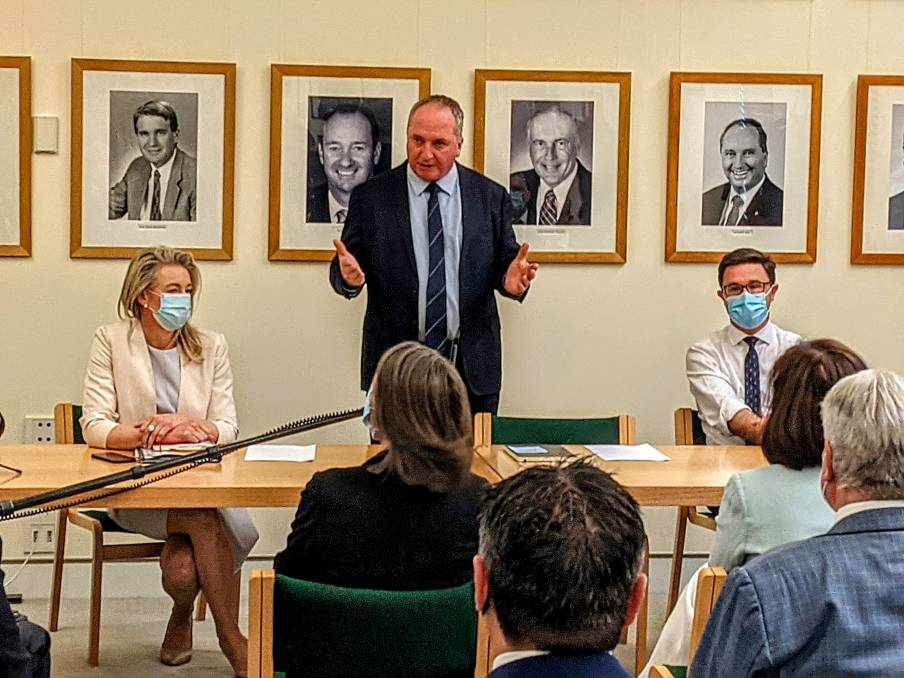 "It's not a case of holding anyone to ransom, or anything like that," Barnaby Joyce said.

THE Nationals are not "holding anyone to ransom" in the negotiations about a 2050 net-zero emissions target, Deputy Prime Minister Barnaby Joyce says.

The Nationals are expected to agree to the government's climate action plan, however the finer details - and what compensation for regional Australia the Nationals can extract from the Liberals - are still the subject of wheeling and dealing.

About a third of the Nationals party room is strongly opposed to a 2050 net-zero target, while many are firmly in favour provided the regions are not unduly affected.

"It's not a case of holding anyone to ransom, or anything like that," Mr Joyce said.

The Nationals leader addressed his party room on Monday and acknowledged there are strong opposing views within the party, but hoped "in the next short period of time, we can come to some sort of decision".

"I know out in the community there are strong views represented on both sides," Mr Joyce said.

"On behalf of regional Australia, we have to make sure our deliberations take into account their views."

Prime Minister Scott Morrison is under international pressure to get the Nationals to agree to the new climate targets before the United Nations climate conference in Glasgow at the end of the month.

Mr Morrison flagged the idea of increasing Australia's 2030 emissions reduction target, which currently sits at reducing levels by 26 to 28 per cent from 2005 levels, to keep in line with other developed nations.

But Mr Joyce said the proposal was unlikely to get past the Nationals party room.

"If you say I've got to be honest and say, well, what's your views on the room on that issue, I'd say no, I don't think that's going to happen."

Labor leader Anthony Albanese said while the Nationals argued over the 2050 target, the world and the business community had already moved on.

"The Nationals standing against climate change policy is like a quill salesman after the printing press has been invented, going around trying to sell their product and the world and the business community have moved on," Mr Albanese said.

"Everyone's locked in to support it. What you have here is the National Party pretending that they're not a part of the Coalition government.

"This is a bizarre situation, whereby you have a clear indication that the Cabinet made the decision last week, and the Deputy Prime Minister of the country is pretending that he's not a part of it."

The climate talks are set to continue on Tuesday, when the Liberals and the Nationals will meet for a joint party room meeting.

If an agreement is reached, it may be signed off and finalised on Wednesday at a Cabinet meeting.

The story Nationals not 'holding anyone to ransom' over climate target: Barnaby Joyce first appeared on Farm Online.