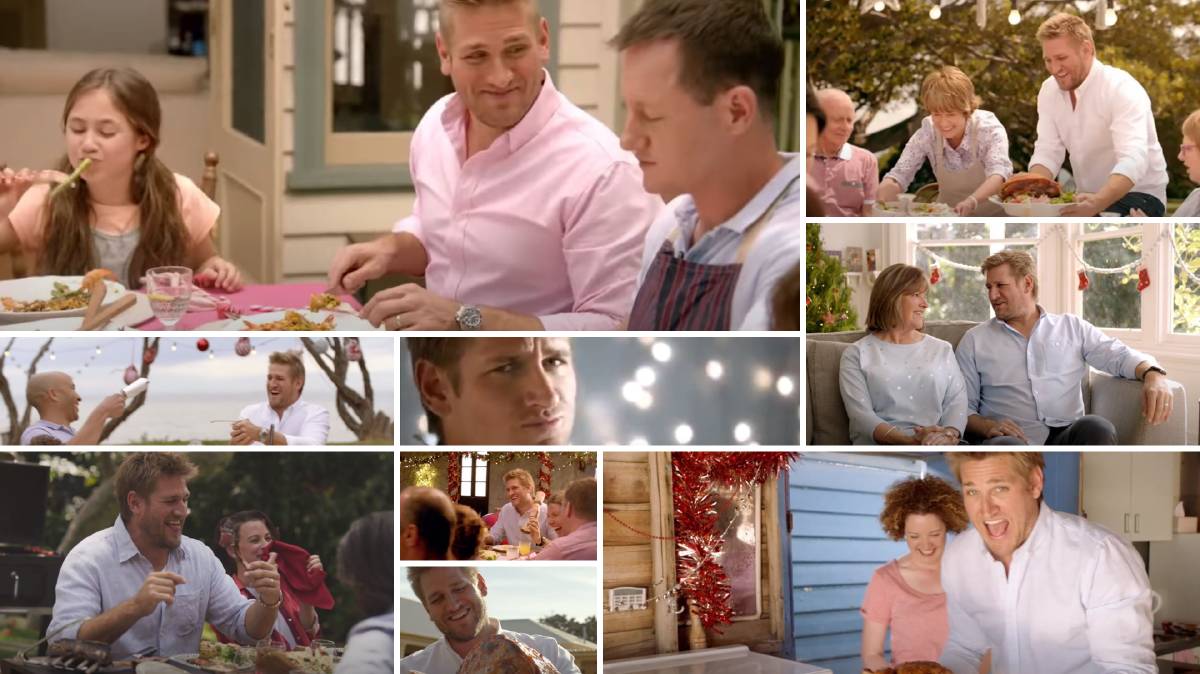 Exactly how many families has Curtis Stone visited for Christmas lunch?

THERE he is; spiked blonde hair, effortless smile, laid-back surfie nature, remnants of a beard which always appears to be struggling to grow.

He's wearing an ultra (usually white linen) comfortable open collar shirt as he interacts with a group of people he may quite reasonably have only met half an hour before, applauding them on their table arrangements and cheekily dipping his finger into the applesauce being carefully placed.

It's happiness. It's Christmas. It's Australia. It's another Coles commercial featuring Curtis Stone.

Much like the stop-motion Rudolph animation TV movie and someone pointing out that the shops have had tinsel up since October, spotting a Coles TV ad with one of Australia's favourite culinary sons has become a tradition.

It begs the question: Exactly how many Aussie family Christmases has Curtis Stone been to?

If we are led to believe that each of the laughing, jovial family units we see each year is a genuine family (surely they couldn't be actors, could they?), then it seems an appearance from Uncle/Cousin Curtis is par for the course.

Has he ever turned up at your house on December 25 offering to concoct his prime rib with dijon and whipped horseradish cream, or perhaps just emerge from the manicured bushes holding a homemade pumpkin pie with caramelised walnuts?

Chances are, probably not.

Are the ads representative of a typical regional Australian Christmas? Probably not either.

They don't contain Black and Gold brand fruit mince pies plonked on a paper plate, or Aunty Norreen banging on endlessly about how she almost ruined the pineapple and coconut salad, or a breakfast bowl full of over-microwaved frozen veggies.

There's no seven-year-old screaming for double-A batteries or mother-in-law rolling her eyes at watery gravy; no swarm of flies burying into the store-bought potato salad or 40-knot wind threatening to tear every solar light from the gutter.

There is a dreamy, desirable quality to the ads.

That's the point of course, tempting us to believe a supermarket could facilitate such an occurrence.

Strangely though, they make many of us keen to embrace the chaos that often is Christmas lunch in towns throughout Australia.

It's a safe bet most families outside the big cities (and probably most inside) aren't heading to Myer or David Jones to purchase the required shabby-chic adornments having been inspired by a Home Beautiful "your perfect Christmas" photo display.

No, they are probably just ensuring all the essentials are there. Has Robert brought the prawns? Is Dad going to be right with the plum pudding? How on earth will Claudette find a pumpkin at this late stage?

It's messy, loud, bustling and disjointed. And that's the beauty of it.

It's embracing the spirit of Christmas in that it doesn't matter what you've prepared or haven't prepared, what your brought or forgot to, what brand of cordial fills the cups; there is peace and forgiveness awaiting around the Christmas table... plus a bit of chook with gravy.

From all reports, he's probably a terribly nice bloke, young Curtis, and a high-end celebrity chef who rubs shoulders Oprah has to pay the bills somehow, of course.

So thanks to Mr Stone for entertaining (as in, providing something visual to enjoy, not serving up food) us all and inspiring us to embrace whatever our Christmas lunches will look like.

And Curtis, if you're reading this, you're more than welcome to drop by with a whole roasted chicken and some tomato-basil butter.