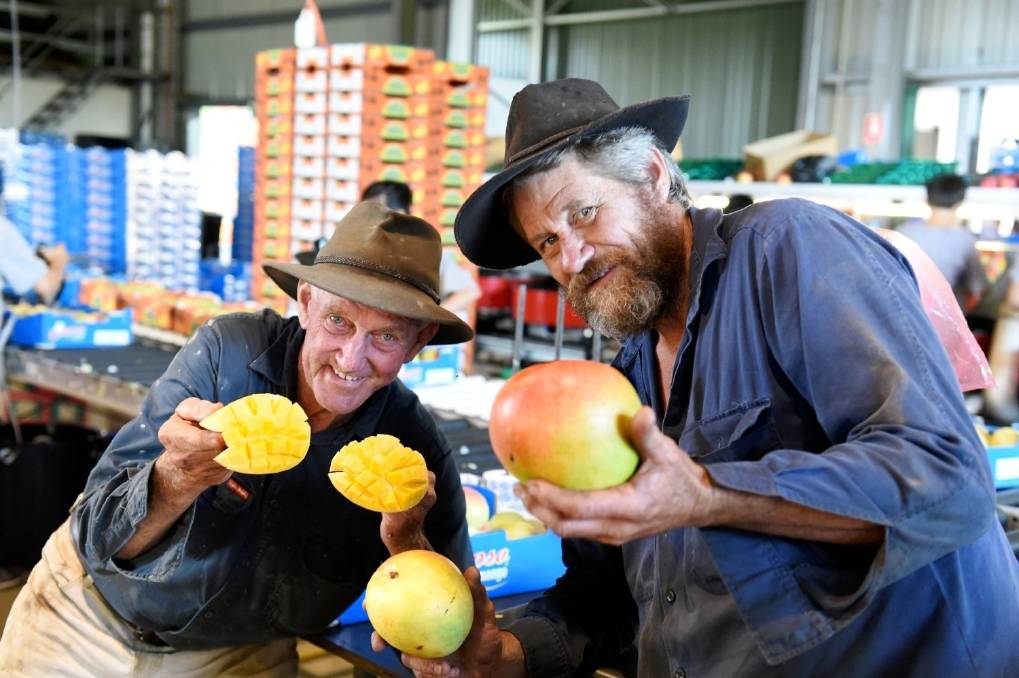 AMERICAN mango consumers may never give the Queensland coastal region of Mullett Creek a thought. They probably aren't likely to either, unless their newfound supply of Aussie fruit dries up.

AMERICAN mango consumers may never give the Queensland coastal region of Mullett (CORRECT) Creek a thought.

They probably aren’t likely to either, unless their newfound supply of Aussie fruit dries up.

This rural community east of Rosedale bordering the Littabella National Park helped with a break-through in international horticulture trade.

In February, Sunny Bluff Produce at Mullett Creek supplied mangoes for the initial export to the US market.

The US was closed to Australian mangoes due to quarantine restrictions but a bilateral agreement to export mangoes and lychees using irradiation as the mandatory phytosanitary treatment unlocked access.

Getting a foot in the US’s door was the result of a joint effort between the Federal Department of Agriculture, the Australian Mango Industry Association (AMIA) and Horticulture Innovation Australia Ltd.

Since it was granted in September 2013 the AMIA worked closely with the Department of Agriculture to ensure the working protocol was of the most benefit to Australian mango growers.

Once the three-year pilot program was agreed between Australian and US officials last December, growers and packing sheds were invited to register for the US program.

With the approval given, exporters required fruit to send to capitalise on the access, despite the mango season drawing to a close.

For father and son mango growers Tom and Robert Gorton, it was due acknowledgement for adhering to strict protocols.

Both Australian and American biosecurity officers visited the property ensuring that “all boxes were ticked”.

Contributing growers were required to document and record pest scout monitoring for pests of concern for the US and ensure their chemical spray program was compliant with the US and chemicals that are not registered in the US were not used.

In addition, the USDA required a special insect-proof box to ensure there was no chance of insect reinfestation.

It was their trays of Calypso mangoes which helped make up the 804 trays sent to the US.

Sunny Bluff Produce has about 80 hectares (200 acres) of mangoes, putting out an estimated 100,000 5kg trays per season.

It also produces a similar quantity of avocados, and about 500 tonnes of lychees.

Tom Gorton said he expected both the mango and avocado production to double over the next two to three years with younger trees starting to bear fruit.

He said getting access to the Land of the Free was good plug for Queensland and the mango industry as a whole.

“I believe it’s a tremendous step forward because the industry can’t stay static, it has to expand and to do that we have to have markets,” he said.

“Let’s face it; the USA is a pretty stable sort of a place.”

His concerns about the effects the irradiation treatment might have on the quality and flavour of the fruit were put to rest by positive feedback from US consumers.

According to the March edition of industry newsletter Mango Matters, the fruit was well received.

The first shipment of Calypso mangoes went from Brisbane to Los Angeles by air and sold to Central Market, an upmarket supermarket chain in Texas.

The fruit sold out in just five days from the nine Central Market stores with customers mostly buying two mangoes, attracted by the appealing yellow and red fruit as well as the taste samples showing off the distinctive Australian flavour.

Federal Minister for Agriculture Barnaby acknowledged the significance of the trade’s potential.

“This is an exciting start to Australia’s horticulture trade for the year with 804 cartons of Calypso mangoes from the Bundaberg region available for sale in the Dallas – Fort Worth area,” Mr Joyce said.

“Australians have long enjoyed quality produce and expanding trade with the US will help reinforce our reputation as a competitive exporter of quality agricultural products.”

Minister Joyce said US access for mangoes has been a priority market access request and showed that government-industry partnerships were vitally important to growing new market opportunities.

“The United States is a top export market for Australian horticulture products, and I congratulate those producers who have taken advantage of the opportunities this new market presents,” he said.

The Department of Agriculture has promised to work with the mango industry to prepare for expanded trade next season.

“As the market access arrangement was announced late in the mango season, the amount of mangoes we could send this season was reduced so we are using this opportunity to ensure our processes are in line with the import requirements of the USA,” Mr Gray said.

“Next season, we hope more mango growers will get involved to export their fruit to America.

“Expanding export markets for Australian mangoes is key to achieving our goal of doubling mango exports in three years and the access to the USA demonstrates our commitment to achieving this aim.

“By opening the door to the US market, we will be able to drive demand.”