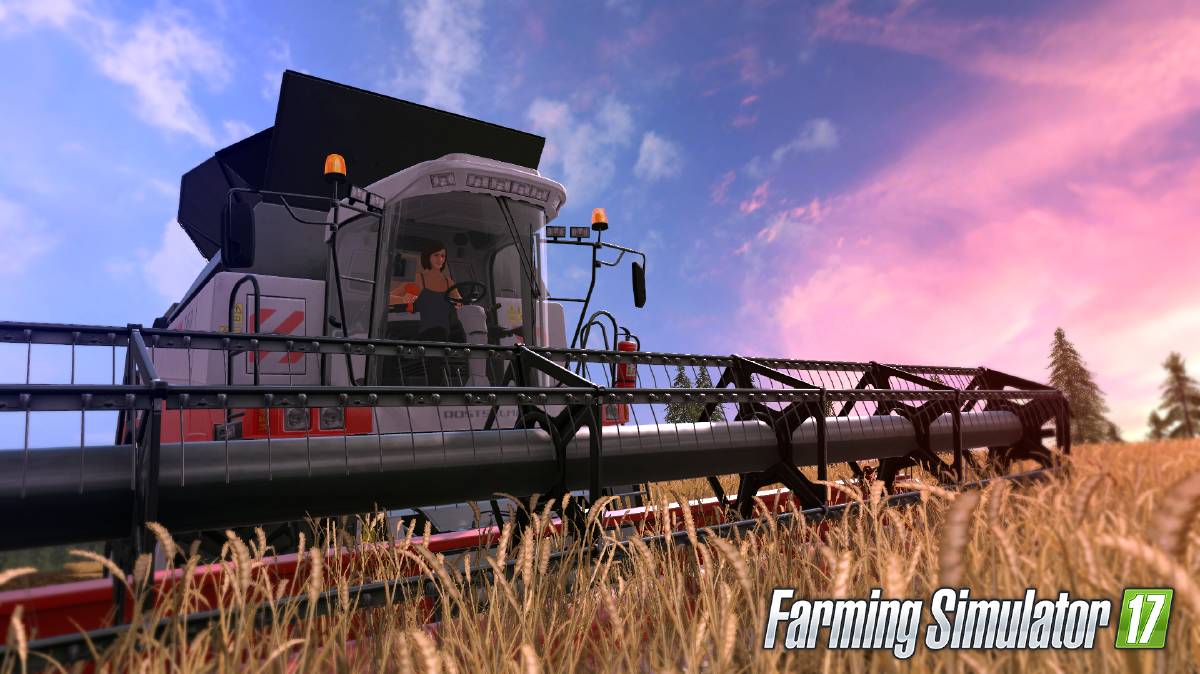 HOP IN: Farming Simulator 17 lets players get behind the controls of some 250 different types of farm machinery.

There's no cute jumping mushrooms or blazing guns in the new computer/video game Farming Simulator 17- it's about making a living from the land... with some very flash gear to help.

WATCHING a $200,000 tractor go careering off the side of a rocky ledge with no regard for the outcome is not your average farm activity.

It is one of the associated joys that's possible in the newly released computer/video game, Farming Simulator 17.

The game, from Giants Software, is as the title suggests: a simulator of farming life.

Players are able to plant, grow and sell crops to earn money in order to buy other properties or more machinery.

With the city-country divide seemingly expanding every year, some might question who on earth would want to play a digital farmer?

The previous edition of Farming Simulator sold five million copies. This edition has already chalked up one million players, according to the developers.

It is the first time the game has been released simultaneously on the PlayStation 4, Xbox One and personal computer (PC). 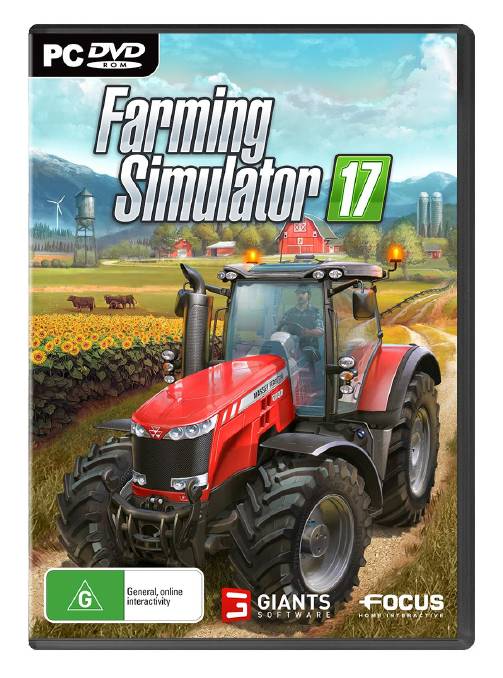 OUT NOW: Farming Simulator 17 is available on PC, Xbox One or PlayStation 4, and has already sold more than 1 million copies.

The game is what's referred to as a "sandbox" game, meaning it's an open world without a storyline, as if the operator were playing in sandpit making up their own narrative.

It feels very much like a 21st century version of what so many eager young farmers did with their toy trucks and tractors on dirt driveways or spare saleyard holding pens.

It quickly becomes apparent that this game is best appreciated by agriculture machinery enthusiasts- those who know the brands, know the horsepower and dream of the prestige that comes from rolling into town in a gleaming new bit of gear.

There is the opportunity to explore hundreds of acres of land, including a detailed new North

American environment, and drive more than 250 authentic farming vehicles and equipment from some 75 manufacturers, including new brands such as Challenger, Fendt, Valtra, Case IH or Massey Ferguson.

Interestingly, forestry also plays a role, with the ability to harvest just about all available timber from a property.

But it's the detail that really gets you- the hide markings on the pigs; the heat vapour from the exhaust on the tractor; the scale-accurate cab interiors of some of the world's leading tractor brands. 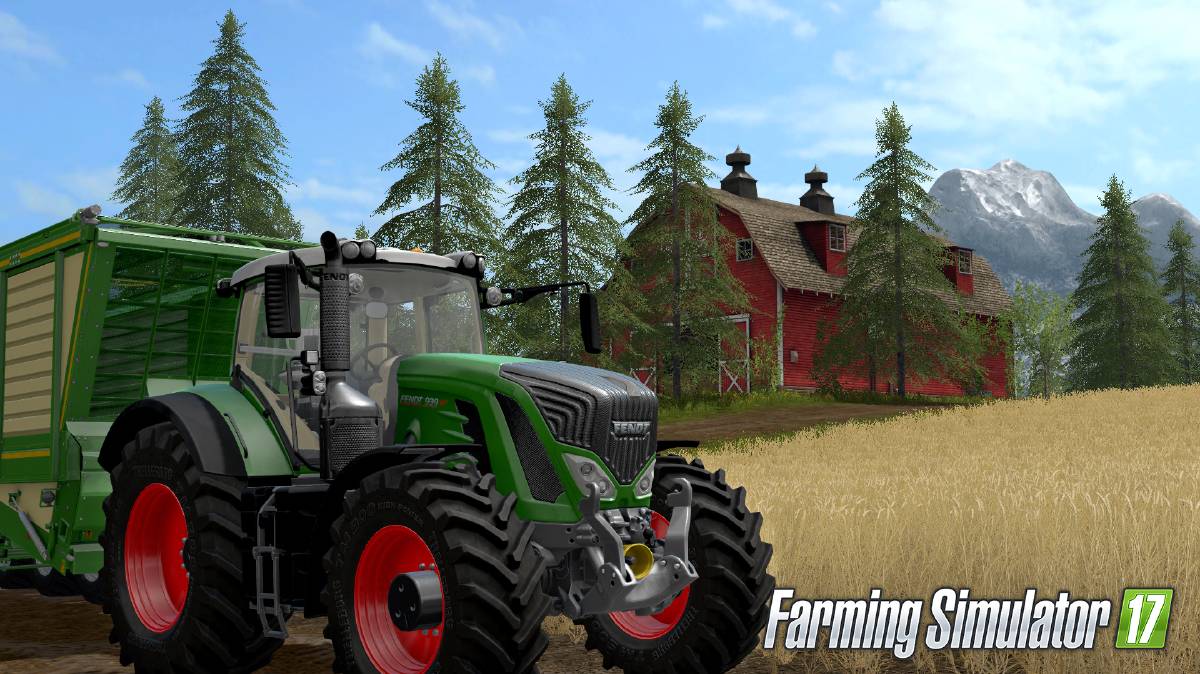 HOWDY Y'ALL: Farming Simulator 17 has a very American feel about it but that could be part of the appeal for those outside the States wanting to experience it.

Much of this is due to a technique called Physically-Based Rendering, meaning many vehicles in Farming Simulator 17 are near-photorealistic.

The game’s engine simulates realistic light reactions on metal, plastic and glass. On the physics side, every vehicle has true-to-life, natural suspension as it navigates the terrain.

When filling trailers and containers, the special Fill Plane System allows for true-to-life physics with grains and liquids.

Vehicles can be customised with motors, wheels and other pieces available to be replaced to adapt to specific activities.

Sometimes the colour of a vehicle can also be changed.

Hired help can brought onto a farm to free you up to turn your hand to other crops or fields. (Or hurtling machinery into drainage channels at full pelt, if that's your thing.)

The visual detail is intricate but some of the business-options may leave some players wanting more. 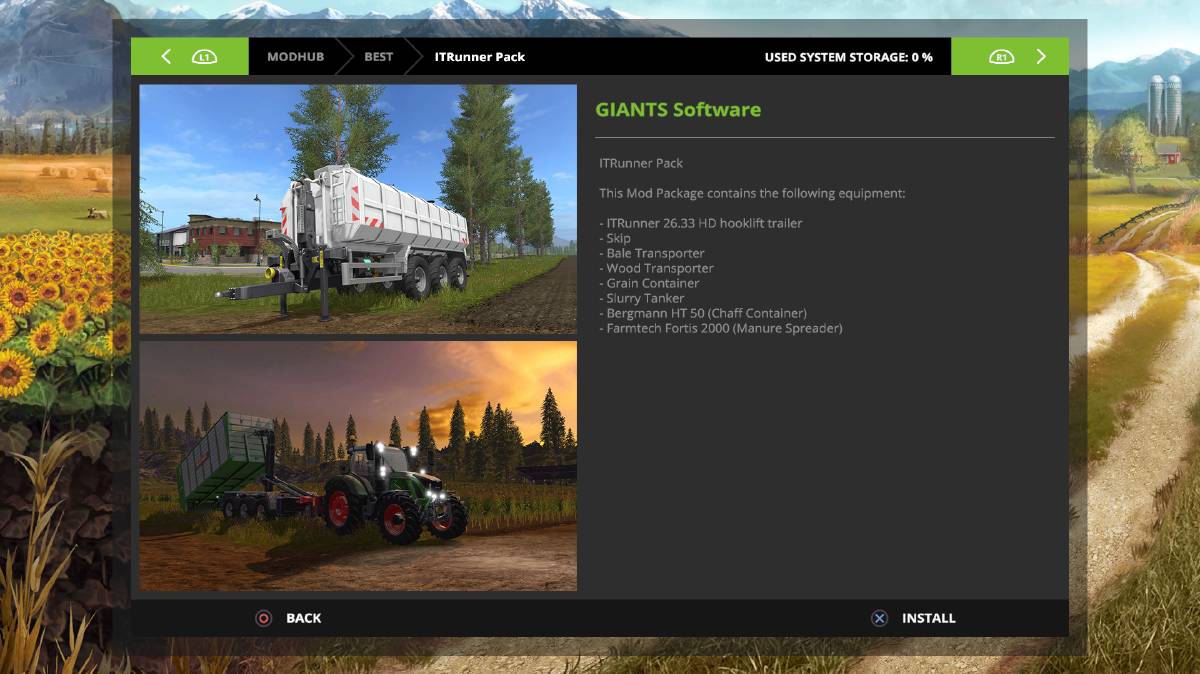 OPTIONS APLENTY: The game provides an immense breadth of options when it comes to purchasing new equipment and operating modes.

For instance, there is no option (at the moment) to improve herd reproduction through the purchase of higher quality bulls, or track bloodlines.

Perhaps that's asking a bit too much.

There's no constant soundtrack as such, although users can choose to turn on the radio while in the cab of a tractor, or even listen to their own MP3 playlist stored on the computer.

When in the thick of gameplay, the air is usually filled with the rumble of the machine you're in or the tweeting of birds and general rural ambience.

How real is real?

That's probably not good news for a game but if nothing else, Farming Simulator 17 gives a glimpse into the breadth of skills and concentration needed to run a rural enterprise.

It even provides a snapshot of the less-spoken of monotony of rural work.

If you decide against employing someone to save "coin" (that's the official in-game currency) then you'll find yourself in the seat of the tractor drilling up and down the long, long rows.

The option is there to toggle the time factor so everything moves a bit faster but if you really want the grit and grind of the farming experience, then it's best left as is.

The game houses a brand new railway system, allowing you to transport all your goods directly to the dynamic, ever changing, market.

And yes, you even get to drive the train.

As a simulation though, there is something of an expectation that adverse treatment of equipment will lead to damage and repair costs. 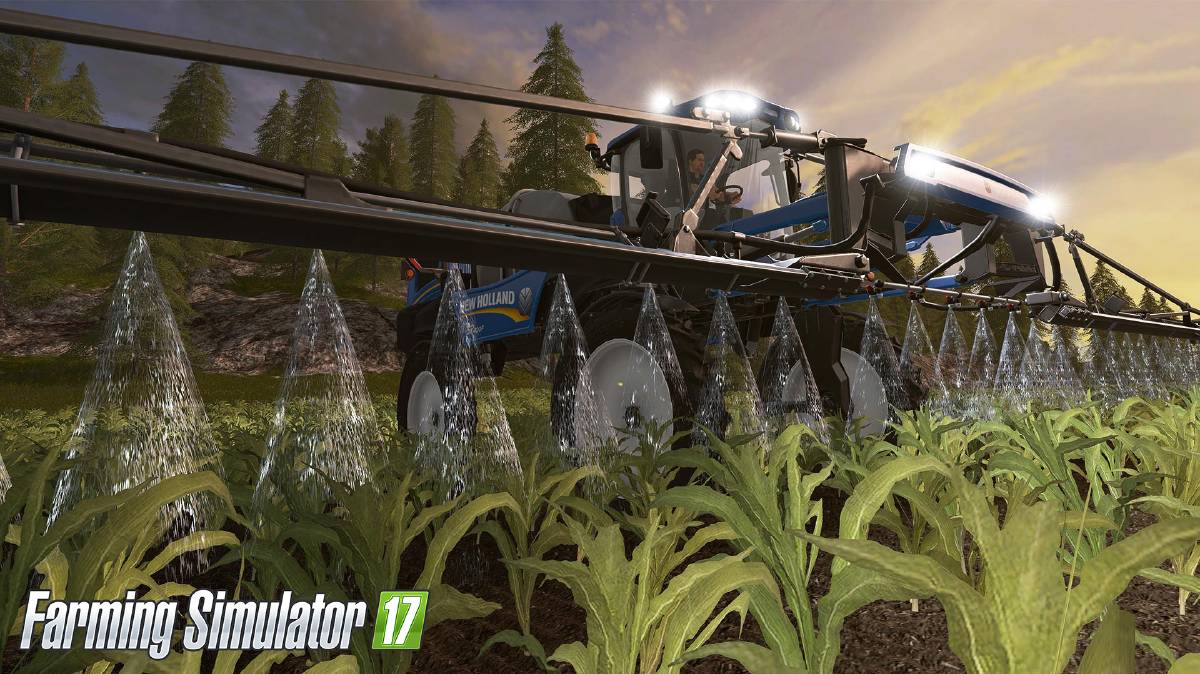 PIXEL PERFECT: The breathtaking detail of the game is shown in the finer details of the machinery's operation, look and feel.

This didn't seem to be the case, and comes back to the opening line about driving an expensive machine off the side of near cliff to see what happens.

Vehicles roll and stop with impact when driven into each other but there are no lasting effects on them.

They stay shiny, new and operational.

This creates an amusing chance to do the ridiculous like driving a grain header down a railway track or towing a load of pigs right into the middle of a water reservoir.

This sort of recklessness became a welcome diversion from the drain of plowing, fertilising, seeding, harvesting, delivering, planning and managing livestock.

Home on the range

IT feels overtly American. The barns, the terminology, the landscape- even down to the near stereotypical denim overalls, chequered shirt (you can pick your colour though) and curved-brim hat.

Perhaps there is downloadable content to change one's cap or outfits but that's what you start off with.

That could be part of the appeal for players from outside the United States. Australian players will be reminded of what part of the world they are in when driving down the left side of the road only to be greeted by an oncoming motorist.

There appears to be an assumption of prior experience in playing a Farming Simulator title, something this writer had not done before.

And yet even in this there is a sense of the "sink or swim" nature to producing a crop or raising livestock.

Clicking "start" finds you plonked on the farm with the only slight advice given recommending you do at least the first three tutorials to get the idea.

Perhaps, like Microsoft's Flight Simulator many years before it, what started out as a novel look into what it would be like to get behind he the wheel/stick of an expensive machine and go for a bit of whirl around, has evolved into a sophisticated piece of software.

It's really is a sophisticated toybox where the player's imagination and desire to "make a go" of the rural enterprise is what drives the game.

Loading times were fast enough on the PC version, however whether this would be the case for those in regional areas lacking NBN or basic, reliable internet connection, would be difficult to say.

There are also updates to be done as well, something that may frustrate time poor real farmers who simply want to tune out for a bit and pretend they are running a pork (or "hog") operation in the US's great west.

There's an online multiplayer option which could open up new levels of interaction and gaming.

One of the appeals to Farming Simulator 17 may also be seen as one of its down points.

As beautiful and user-friendly as the Farming Simulator 17 is, there is no emotional connection to the enterprise- no family to take care of; no boarding school fees; no neighbourly yarning over the fence; no church fetes or local race days- things that are the gems of rural life.

Again, that's probably asking too much because this is all about driving big, flash, expensive machinery- and that's just a tonne of fun in itself.

Farming Simulator 17 is available for PC from Steam, Xbox One and PlayStation 4.​