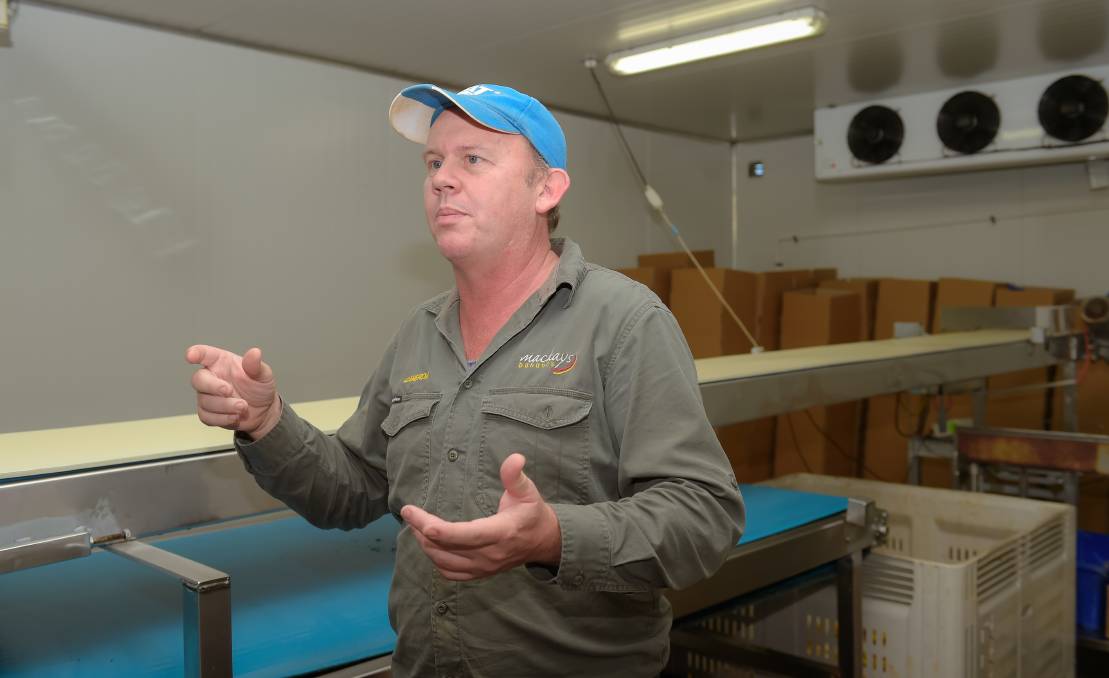 Preparation has proven the key in the Mackay Farming Group's handling of Panama TR4, losing just 2hrs of production since its detection.

JUST two hours was the only time the Mackay Farming Group shut down operations on its Tully banana property when confirmed to be infected with Panama Tropical Race 4 (TR4) last month.

The minimal lost time was due to the company's detailed approach to biosecurity, something director Cameron Mackay is proud of.

Mr Mackay spoke at the Queensland Country Life's Food Heroes Forum in Tully last week, which was hosted within one of the ripening facilities on the Mackay's property.

In his presentation, Mr Mackay was open and honest about the company's approach to battling TR4 which he said had resulted in a "fair change in our business over the last four or five weeks".

Biosecurity Queensland confirmed the presence of the disease within a fortnight of alerting the industry that suspected samples had been taken.

Mr Mackay said since the detection was confirmed, the company had been working hard to keep the property, the biggest of its holdings, operational.

The plantation was back up to full operation at the start of August.

Mr Mackay paid credit to his brother Stephen and cousin Gavin who have kept the property running.

"To do that in five weeks is pretty amazing," Mr Mackay said.

"We only lost two hours production in the whole fiasco of the detection of the disease.

"A big part of why that was able to happen was being prepared.

"We already had a lot of things in place that set us up so that if and when we got the disease we were certainly in a position where it wasn't such a big step to be able to move on and continue operations."

He encouraged any businesses, not just those within agriculture, to have emergency plans in place and prepare for worse-case-scenarios.

Mr Mackay said it was about fostering a culture of adaptability within a business.

"That's a great thing for anyone's business to have that preparedness," he said.

"I would hate to be a business starting from scratch, trying to deal with an outbreak, that's for sure."

That attitude can be seen in other areas of the Mackay operation.

In 2011, Cyclone Yasi tore through some of its plantations. It prompted the group to invest in properties in Lakeland Downs and Bundaberg to sure up supply in less cyclone-prone areas.

Mr Mackay was adamant that alternative varieties would be the way forward for the Australian, and global, banana industries.

"Ultimately, we will need an alternative. Are there alternatives out there? Yes. Breeding programs have resistant bananas in them," Mr Mackay said.

"Are they the same or as good as the Cavendish? Not quite yet but certainly there is a big effort worldwide to breed a banana that is resistant.

"Because ultimately, if you've been on a farm whatsoever, that's the only way you are going to get away from this disease."

He said research on disease outbreaks in other crops had proven the best way forward was to breed away from the disease.

"Knowing we have the genetics to breed away from is good," he said.

Mr Mackay keeps a close and personal eye on banana research, travelling the world inspecting the work of other countries.

He recently returned from Central America where he said there was intense concern about contracting TR4 as the area currently doesn't have it. GROWING: One of the Mackay Farming Group banana plantations. The company has reduced its exposure to weather extremes by setting up banana farms at Lakeland Downs and Bundaberg.

Closer to home, researchers in the Northern Territory have shown there are banana varieties which are fully resistant to Panama disease.

"Now it's a matter of, around the world, resistant breeding, making sure we can put those genes into a banana that is as good, or maybe even better, than our Cavendish bananas that we use at the moment," Mr Mackay said.

While difficult to find a silver lining in a TR4 outbreak, there could be added benefits to the heightened research going on.

Mr Mackay said as part of some of the breeding programs for TR4, there are also components which involve adding disease resistance for common banana hindrances.

Mr Mackay said the banana industry had already significantly reduced its use of chemical pesticides and fungicides to the point that chemical companies no longer target the industry.

"Our chemical use has reduced over the last 20 years to the point that, we don't have any chemical companies seeking out banana growers," he said.

"We are so minor use, it is not worth their while coming and knocking on our door to try and sell chemicals."

He said research down the track may lead to programs which require no chemical use at all.