Who would have guessed a generic brand home renovation tool from Bunnings would be part of a hi-tech capsicum-picking robot?

AN Ozito-brand oscillating tool purchased from Bunnings provided one of the integral components to an Australian-made capsicum-picking robot prototype.

Harvey is the product of a Queensland University of Technology research team which is exploring the possibilities of robotics in agriculture in order to reduce the burden of labour costs for growers.

The one-armed robot is designed to travel down a row, either in a field or within a greenhouse, detect a ripe capsicum and pick it from the bush.

It uses camera sensors and algorithms to "see" the capsicum, before engaging an arm equipped with a cutting tool and suction cup to remove the fruit before delivering it into a container.

The seemingly simple task for a human provides a number of challenges for robot designers and programmers.

He said while robots were already widely used within industries such as car manufacturing, translating similar technology to agriculture was difficult due to the uncertainty of tasks and variables.

One of the trickier parts to making Harvey was getting the grip right.

"One thing is grasping. It's very challenging for a robot to do this in the real world," Dr Lehnert said.

Work continues on improving Harvey's ability to locate ripe fruit when lighting conditions change with the time of day or whether conditions which affect camera sensors.

The device essentially builds a virtual three-dimensional image of each fruit to assess where it is and which part is the peduncle (stem) to cut.

This involves computer-based "deep learning" so the unit can identify between fruit, leaves and stem. 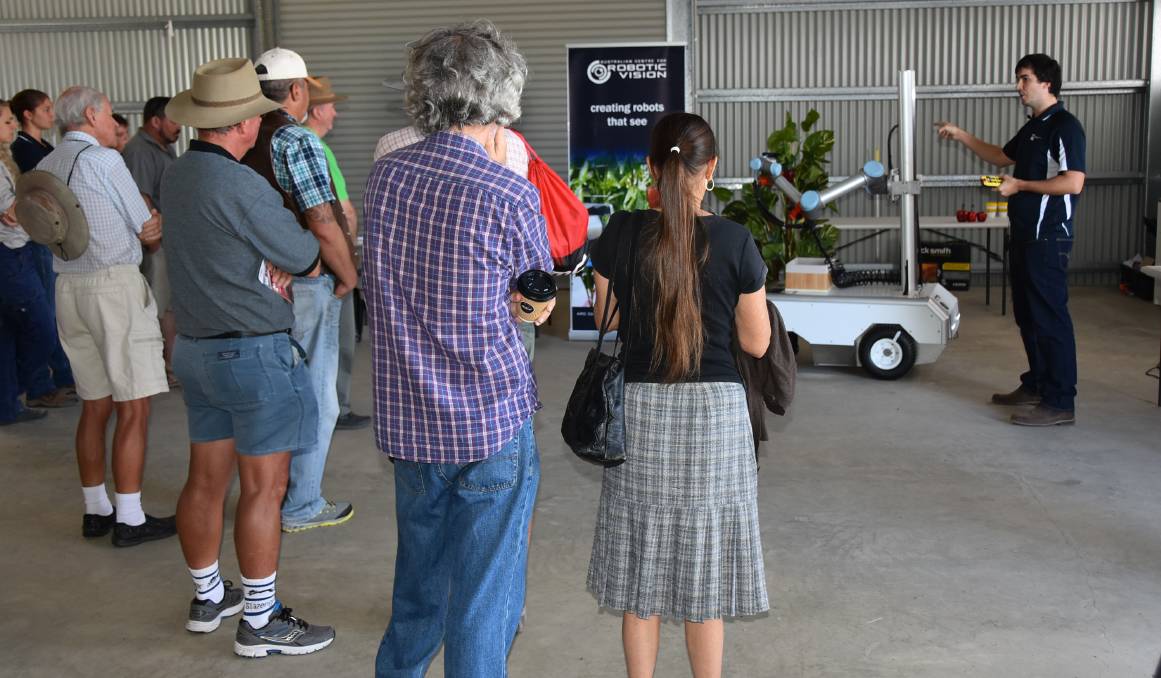 "So just detecting the location of a fruit is actually quite difficult," Dr Lehnert said.

Capsicums the pick of crops

THE team decided to focus on picking capsicums because about 80pc of Australia's capsicums are grown in Qld, as well as it being a fairly robust fruit and the general layout of its growing environment can be more easily negotiated by a robot.

He said with 20 - 40pc of production costs being labour-related, coming up with something to reduce that would have major impacts for Australian horticulture.

Apart from a reduction in wages, Dr Lehnert said robots also reduced the safety risk in some tasks for human workers.

KEEPING it simple was part of the focus for the QUT team.

The basic components of Harvey include several motors, sensors, a robot arm, an onboard air-compressor, cameras, a cutting tool and a suction cup.

Dr Lehnert said it was about realising what would be useful for humans to use and therefore making that usable for a robot.

That meant trips to retail shops, like Bunnings, to see what was available that could be incorporated or modified.

Another facet in using common, workable items within Harvey was utilising the computer operating system, Linux, instead of the more commercial and widely used Windows platform.

A project in the Netherlands managed to harvest about 33pc of the capsicums from a plant in a trial, at about 94 seconds per capsicum.

QUT's testing has found Harvey can manage closer to 70pc of fruit at about 20 - 22 seconds per piece.

MOVING the project forward, Dr Lehnert said it would be ideal to work with growers and plant breeders in order to come up with a system that could improve the likelihood of robot harvesting.

He said the idea of a fruit with a longer peduncle could provide easier robotic harvesting.

Other aspects being considered include crop recording to help with a farmer's decision-making (such as numbers of fruit picked) and perhaps autonomous operation where the device could dock itself in order to recharge and deliver the harvested fruit.

Some 600 people went through the Future Farming Masterclass display on the first day of AgroTrend with more than 300 sitting in the information sessions with many hanging around to ask questions of the speakers.

The event was a joint initiative of Bundaberg Fruit and Vegetable Growers and Central Queensland University.

The program was assisted with funding from the Qld Government's Engaging Science Program and VegNET, Hort Innovation and the Australian Government.

Sponsored by
Biodynamic producers on the Atherton Tablelands harvest their most successful garlic crop in over 20 years.
Test
The livelihood of cane growers in the Lower Herbert is taking a hit with floodwater unable to escape due to drainage maintenance issues.
Test
Potent rural property values are being inspired by strong cattle prices, and low interest rates.
Test
A North Queensland museum's mission is to see the mining heritage preserved for the benefit of future generations.
Test
Cyclone Kimi didn't make landfall before it was downgraded to a tropical low this morning.
Test
When Tom Martel set up his butcher shop to cater for the gold rush in the Gilberton region in 1869, he could hardly have imagined his descendants still living there 150 years later.
Test
FISHTAIL: A 912 hectare property, which was once part of the renowned Tully River Station, is on the market.
Test
The decision by rural lobby group AgForce to abstain from voting on an aspirational economy-wide target of net carbon zero emissions by 2050, as part of an NFF policy, has not been received favourably by the Green Shirts grassroots agricultural group.
Test