A commitment to biosecurity has been acknowledged for a Vic strawberry grower.

YARRA Valley strawberry grower, Luciano Corallo, has been named a joint winner of the 2019 Farm Biosecurity Producer of the Year award.

Mr Corallo was nominated for his preventative approach to disease and pest management, as well as his active participation in surveillance and his willingness to host biosecurity workshops on-farm and share his knowledge with the industry.

PHA executive director and chief executive officer, Greg Fraser, said Mr Corallo had shown not only his commitment to on-farm biosecurity, but also a firm understanding of its importance to the wider industry.

“He plays an active role in encouraging others to take proactive steps to secure their farms, made all the more effective by his enthusiasm for demonstrating his own on-farm practices,” Mr Fraser said.

“The more we do to highlight and show what best-practice looks like and provide help to implement these practices, the better. But for this, we need leaders to step up and share their insights."

Mr Corallos is a committee member of the Victorian Strawberry Growers Association and one of two Victorian representatives on the board of peak industry body Strawberries Australia. He places high value on the economic, environmental and social returns from adopting a preventative approach, and maintains an exceptional standard for the strawberry industry.

Regarded as an early adopter of best practice farm management, Mr Corallo has 100 per cent groundcover maintained year round on headlands and buffers, grassed swales for drainage and crop rotation.

His farm incorporates an integrated pest management approach to production, and is a demonstration site for encouraging natural enemies as part of conservation biological control options.

Mr Corallo is also involved in the Queensland fruit fly awareness program in the Yarra Valley, with state-of-the-art, remotely-accessed camera fruit fly traps as part of a sentinel detection network for the region. 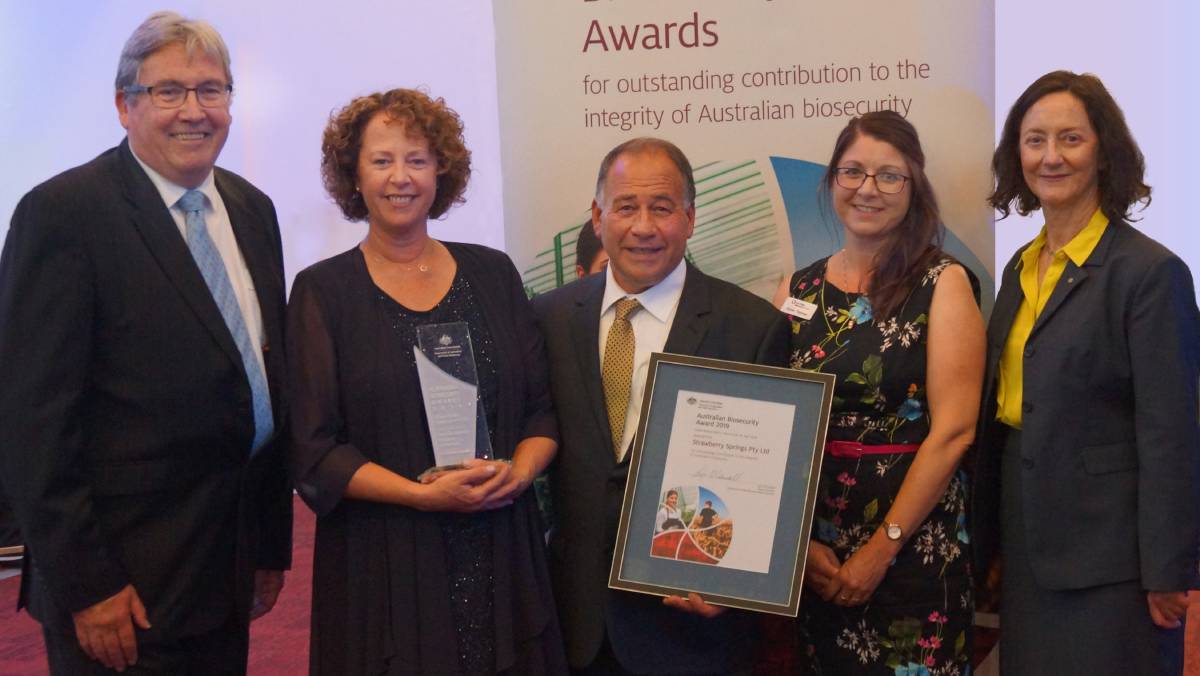 Another horticulture-related winner at the Australian Biosecurity Awards was Citrus Australia chief executive officer, Nathan Hancock, in the Industry Category, which recognises industry and government organisations, teams and individuals that have delivered significant outcomes for Australia’s biosecurity system.

Mr Hancock was recognised for his work as industry liaison officer during the 2018 outbreak of citrus canker.

The Northern Territory Government Department of Primary Industry and Resources' Sarah Corcoran was also acknowledged for her work with industry, government and community during the 2018 citrus canker outbreak.

Farm Biosecurity is a national awareness program that provides information to livestock and plant producers and related service providers about on-farm biosecurity, and prevention of animal diseases and plant pests.